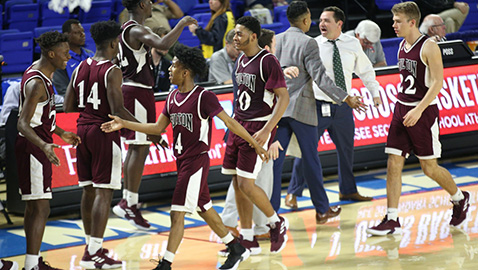 Fulton was wide awake for a 10 o’clock tipoff in the Class AA semifinals Friday morning in Murfreesboro and built a 13-point lead in the first half of its 66-55 win over East Nashville Magnet School in the TSSAA state basketball tournament.

“I liked what I saw in the first half,” said Fulton Coach Jody Wright. “We were what we needed to be. I’ve said it before – the best teams don’t always win, but the tougher ones do, and I felt like overall we were tougher today.”

Nashville East (27-7) got into foul trouble early and had to bench three of their starters at the beginning of the second period. They used three point shots (6 for 17) and the press to climb back in the game in the fourth period and got as close as five points.

Fulton started holding the ball with around three minutes left and Edward Lacy hit both ends of a 1 and 1 at 2:33 to extend the lead to seven. With the Eagles gambling on defense, Tommy Sweat found Deshawn Page wide open under the basket for an easy field goal to make it 62-54.

Lacy went down the lane for a layup with just under a minute to go and Sweat sank two more foul shots for the final margin.

Page finished with a game-high 19 points and six rebounds. Lacy scored 13 plus had seven assists. Trey Davis chipped in 10 and Sweat eight.

East Coach Jim Fey was proud of his team for continuing to battle, but also was impressed with the Falcons.

“Fulton executed pretty well,” said Fey, “but a lot of my guys had to step into roles, because we had three starters in foul trouble early. I’m not saying we didn’t foul, but that was a factor.

“Fulton’s defense was outstanding,” added Fey. “We’ve depended a lot over the year on dribble penetration. They shut that down because they close the gaps extremely well. They look like they all play football and I’m sure a big majority of those guys do. They’re strong, tough-minded and well-coached.”

In a game that wasn’t very pretty, Fulton’s Trey West, a 6-2 reserve forward, had a perfect day as far as shooting and handling the ball in the Falcons’ 44-41 overtime win over Memphis Mitchell in the quarterfinals Wednesday.

West didn’t miss a shot all day (6 of 6 foul shots and 1 of 1 from the field) and didn’t turn over the ball any as he contributed eight big points in the win.

Trey Davis called his senior teammate’s performance “big time” and said “he made clutch free throws at the end.”

Fulton Coach Jody Wright expected a low-scoring game coming in and felt both teams were affected by tough defensive play. As far as the turnovers, he said: “Just two teams guarding the heck out of each other.”

The Falcons got off to a cold start, but the Tigers (22-11) weren’t much better as the two teams were tied 9-9 after one period and combined to score only 11 points in the second quarter, with Mitchell going to the dressing room up by one (15-14).

The Tigers opened up a seven-point lead in the third period (23-16) before Fulton started playing better and pulled into a tie at 23-all.

West began the final period by sinking two free throws to tie the game. He hit two more clutch foul shots with 55 seconds to go to tie the game again at 31-all.

Mitchell was holding for the last shot, but Deshawn Page deflected the ball away and Lacy intercepted.  Davis missed a potential game-winner inside.

In the four-minute extra period, Page fed Davis inside as Fulton took a 35-33 lead. The Falcons would not trail again.

The Tigers pulled within three, but Michael Rice’s 3-point attempt from the right wing in the closing seconds missed the mark.

Davis finished with 18 points and Edwards 14 to lead Fulton in scoring. But Davis was an uncharacteristic 0 for 7 from 3-point range and Edwards had eight turnovers, including seven in the first half. Page tallied only two points but pulled down 10 rebounds. West grabbed four boards in the 26 minutes he played. Sub Jashaun Fenderson contributed four assists.

The Tigers made 12 of their 19 turnovers after halftime, while Fulton cut down its turnovers from 10 to six in the second half.