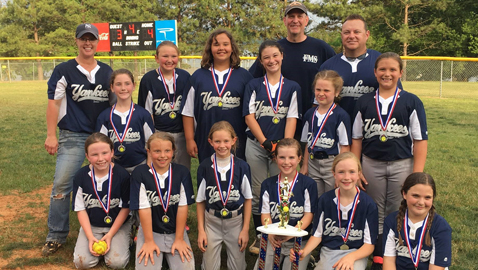 The Yankees started the CBFO 8-10 softball season on a high note with a win against the Blue Jays, but things went sideways after that initial victory as they lost their next 5 games.  But the Yankees never gave in, and all of their hard work finally paid off one Saturday afternoon, when they began what would end in a 12 game winning streak and post-season tournament championship.

When the tournament began, not much was expected from the Yankees, but key defensive plays, solid hitting and smart base running kept them in the winner’s bracket. When asked about the team’s success, head coach Jen Nagi said, “This season was a true team effort.  Every player had great moments at different times with each girl contributing in some way to us being able to walk away with the big trophy.”

The championship game between the Yankees and Mariners was hard fought. Both teams brought their “A” game and made impressive plays, giving the fans a great show.  Yankees pitcher Emma MacTavish had a season high 5 strikeouts from the mound, and Liza Cotten made a great catch in left center, then tossing it to second for a double play. “I’ve spent lots of time working with the girls on catching fly balls,” said Nagi. “To see Liza make that catch made my entire season.  I had to call a timeout because all of her teammates were so excited for her and were running over and giving her hugs and high fives.  It was awesome.”

When the Yankees took their turn at the plate in the bottom of the fourth and final inning, they were down 3-1.  Kaitlyn Atwell, their number two batter, got a single to start things off.  Lillian Nagi stepped up to the plate and after hitting 5 fouls, ultimately put a beautiful hit down the left field line to advance Atwell.  With the tying runs on base, Molly Bryant made a solid connection to put the ball into left field, scoring Atwell to make it a 3-2 game.  The Mariners outfield quickly got the ball back in to stop play and called a timeout.

Yankees first base coach Chris MacTavish and third base coach Jen Nagi took the opportunity to talk strategy with the batter, Maleigh Rudder, and their base runners.  “I jogged over to second base and told Molly to take a good leadoff and to watch me at third when the ball was hit and not to run unless I told her to,” said Nagi. “During practice the previous night I went over tagging-up on fly balls and I knew this was the perfect time to try it, so I told my third base runner, Lillian, to prepare for a tag and to listen for me to tell her when to run.”

It turned out no tag-up was needed as Maleigh stepped to the plate and nailed the pitch, sending the ball to the fence and bringing in Lillian with the tying run and Molly with the winning run. The Yankees beat the Mariners 4-3, capturing the 8-10 CBFO Tournament Championship, and finishing with a 13-5 record.