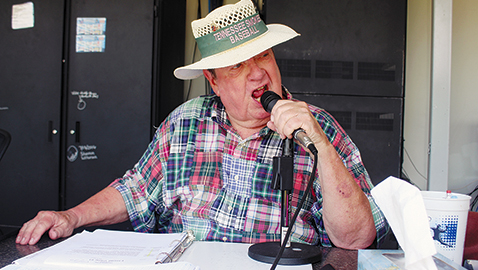 And that is bringing back the popular “Leonard’s Losers” prediction show that thousands would listen to every Saturday on the radio and often on their way to a game.

Yardley, a former Carter High baseball coach and the Tennessee Smokies’ public address announcer since 1998, even looks and sounds quite a bit like Leonard Postero, Sr., who went by “Leonard Postosties” on his show, which he started in 1958 and continued through 1999 before retiring.

Leonard, a native of Athens, Ga., predicted college football games with that Southern drawl of his and used mascots like Tennessee’s “Riflemen,” Georgia’s “Red Clay Hounds” and the “the Pope’s pupils” for Notre Dame in his monologues. And then he ended each prediction with “Leonard’s Loser …”

Yardley was a big fan of Leonard and the show, which was carried on over 1400 radio stations at the height of its popularity.

“I’ve tried to revive (the show) and I bought the trademark two years ago,” said Yardley, a longtime Dandridge resident. “There are fans out there that remember the show and were always listeners. Hopefully, it may grow into something because Leonard was a great innovator and had the wit to do that.”

Yardley first started sending his monologues to his buddies about eight years ago.

“Then I started getting emails from others – and some folks I didn’t even know – to be put on the list. It grew to about 100 people.”

When Yardley turned 70 a couple of years ago, he figured, “If I’m going to do something, I better get at it.

“So I got an attorney and he did the trademark stuff through the proper channels. We’ve been going for two years now.”

Two radio stations in Knoxville are carrying the show weekly, including The Jayson Swain Event. It also can be heard on WJOX, a sports talk station in Tuscaloosa, and in Lexington and Louisville, Ky.

You also can hear the show on the internet too at www.theleonardlosers.com, beginning every Thursday at noon.

Yardley usually picks 14 games a week, including all of the SEC games and some of the high-profile national contests.

Leonard’s predictions have nothing to do with the point spread. He just picks the loser.

“Florida vs. Vanderbilt. The giant water lizards leave The Swamp and head for Music City. The Dores are a 30-point dog and looking for their first win with this SEC clash. Being a nooner, the Gators should be at Tootsies by Happy Hour. Leonard’s Loser … Vanderbilt.”

The week before, when five SEC games were postponed because of COVID-19, Leonard went 9-0 in his picks.

“That was the first time I’ve ever picked them all right,” said Yardley, now 73. “It’s really been fun.”

Yardley hopes the show can increase its exposure and he can obtain some sponsorship.

“I haven’t made any money yet,” he said. “I’m already looking forward to next year. Maybe I’ll get lucky.”

And like Leonard’s sidekick on the show always said, “Get me outta here Percy!”