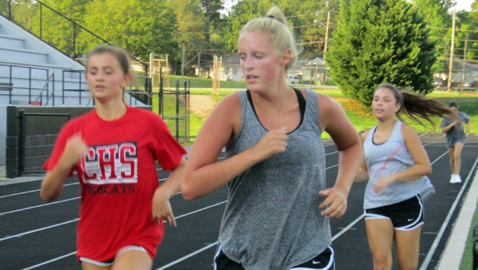 A young cheerleading squad from Central High, which has 10 freshmen and sophomores combined among its 14 members, returned with numerous awards from a Universal Cheerleading Association camp June 18-20.

“We won dance, cheer and the Game Day championship,” said Coach Jackie Raley last week. “And the best thing is we won the leadership award that is voted on by peers. To be such a young team, that’s huge.”

Raley has six freshmen and four sophomores, and only two seniors and two juniors.

The UCA event was held at the Gatlinburg Park Vista Hotel.

Raley is coaching her eighth team at CHS. The squad has totaled over 160 community service hours since it was selected in April. Those hours were accumulated by passing out “Central Pride, Fountain City Strong” stickers to businesses in an effort to keep Shannondale Elementary School in the Central school zone.

With Halls High having a new track installed this summer, there has been some discussion about inviting the Halls cheerleaders over to run against the Central cheerleaders on Aug. 4, with the rivalry providing extra motivation for members of both squads to meet their required times.

Halls cheerleader Maggie Beeler, accompanied by her grandfather Charlie Durham, came to the Central track last Tuesday for a run and said she thought the proposed race against the Bobcat cheerleaders was a good idea.