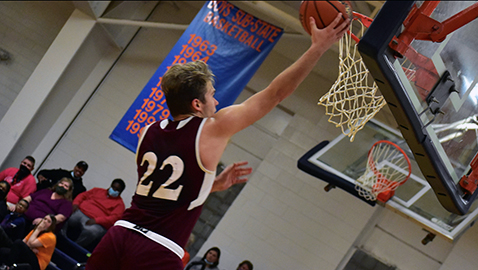 A young Fulton boys basketball team hung with host Greeneville’s veteran group for only about half of the opening period in its TSSAA Class AA State Sectional game March 8.

The Falcons led 2-0 and 7-5 in the early going before senior point guard and captain Connor DeBusk put in a rebound that gave the Greene Devils a 9-7 advantage and a lead they would stretch to 21 points by halftime.

After scoring 26 points in each of the first two periods, Greeneville rolled to a 92-67 victory and earned its seventh trip to the state tournament, which starts Wednesday at Murphy Center on the MTSU campus in Murfreesboro. The Greene Devils will play Bolivar Central (22-6) Wednesday at 7 p.m. (CDT).

Greeneville will go in with a 28-6 record and winner of 24 of its last 25 games, with its last loss coming at the hands of Knoxville Catholic.

Fulton, a rebuilding state power, finished 20-10. It was the first time in school history that the Falcons had suffered back-to-back sectional losses. Greeneville also ended Fulton’s season 97-84 at the same place last year before COVID-19 cancelled the Greene Devils’ trip to the state a few days later.

“Greeneville shot the ball extremely well (in this year’s meeting),” said veteran Fulton Coach Jody Wright. “We defended them fairly well; they just made a lot of tough shots.

“They do not have many weaknesses. They are long, quick and athletic. We had a few spurts of breakdowns and in games like that, you cannot have breakdowns.”

“I am pleased that we got this season in,” said Coach Wright. “I am thankful for the TSSAA and Superintendent Bob Thomas for doing all they could do to ensure that we got to play basketball this season. It was a season that was different from anything I have ever experienced.

“Playing so many young guys (three freshmen and a sophomore in starting five) was a new experience as well,” added Wright. “We started two freshmen in 2016 (a 32-2 team that won the state championship) but we combined those guys with a veteran team.”

Fulton had only two seniors this season in Sweat and Tirell Nixon.

“Both provided us with exceptional leadership and play this year,” said Wright. “Tommy and Tirell are special guys. Really good players, wonderful teammates and high character young men. We will miss them tremendously.”