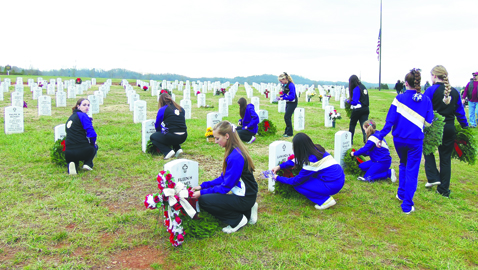 Cheerleaders from The King’s Academy place wreaths on the graves of American veterans in East Tennessee State Veterans Cemetery.

Cheerleaders from The King’s Academy raised funds to purchase 101 wreaths for veterans of United States armed forces.  Then, as part of a nationwide effort called Wreaths Across America, the eleven middle school and high school girls helped place 200 wreaths on the graves at the East Tennessee State Veterans Cemetery on John Sevier Highway Saturday, December 15.
Wreaths Across America is an organization that places wreaths on veterans’ graves across the country.  In 1992, Morrill Worcester, owner of Worcester Wreath Company of Harrington, Maine, had wreathes left over at the end of the season.  Remembering a childhood visit to Arlington National Cemetery, he decided to send them there to honor veterans.
Worcester did this quietly for a few years until a photo of the wreath covered graves spread over the internet in 2005.  In 2007the Worcester family, along with veterans, other groups and individuals who had helped with their annual Christmas wreath ceremony in Arlington, formed Wreaths Across America, a non-profit 501(c)3 organization, to continue and expand this effort.
In 2010, Wreaths Across America and a national network of volunteers laid over 220,000 memorial wreaths at 545 locations in the United States and beyond. Cemeteries included the Pearl Harbor Memorial, Bunker Hill, Valley Forge and the sites of the September 11 tragedies. The effort was accomplished with help from 902 fundraising groups, corporate contributions, and donations of trucking and shipping, and thousands of helping hands.
The King’s Academy cheerleaders acknowledged this was a very moving experience for them.  Their coach, Melissa Dovey, commented, “I am very proud of the impact they had on the other veterans and family members who were present.  They received many compliments and many thanks for participating.  We were honored to participate in this event to show the families and the surviving veterans that we have not forgotten their service and sacrifice.”
At the end of the wreath-laying the girls gathered quietly and respectfully sang the national anthem.  The people who were still there gathered around with their hands on their heart or saluting, and some cried.
More information on Wreaths Across America can be found atwww.wreathsacrossamerica.org.