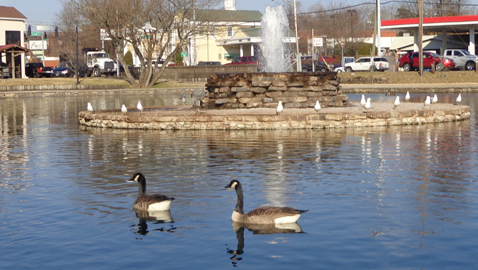 The Fountain City Town Hall held a community meeting last Monday at the Lions Club Building at Fountain City Park to begin planning for the Honor Fountain City Day in May and to hear from the city on the restoration of the lake there.

“Don’t call it a pond,” one audience member called out at the beginning of an update report on Fountain City Lake.

The Fountain City Park, including the lake, is not owned by the city but included as a city park that is maintained by the Lions Club. The city got involved last year when the club asked for help in algae control and water loss in the lake. Mayor Madeline Rogero pledged funds to help and the city council approved her expanded budget.

Lots of work has been done to restore the lake but, according to the City Department of Engineers, much more is needed and is planned. Dave Hagerman of the department’s Storm Water Engineering division said that a long term contract with Lamar Dunn and Associates will develop a maintenance plan that includes waterfowl and vegetation management.

Future plans include a new mechanical system, which will provide pumps and piping for oxygen distribution in the lake. That’s part of phase two of the project.

Phase Three will be more extensive and includes getting the muck out of the bottom of the lake and creating habitat including fish attractor stakes, a sandy and cobble bottom and vegetated refuge areas. The last time the lake was “mucked out” was in 1985.  The city is working on State Aquatic Resource Alteration requirements. The final phase will include bids and contract letting for installation of the mechanical system.

The audience commented on the overpopulation of waterfowl there and it was noted that new feed dispensers were now in place with appropriate food. Visitors were again cautioned about feeding bread to the ducks and geese.

The Town Hall discussed plans for the May 25th Honor Fountain City Day including policies on signs, concession prices, insurance, and even securing a train ride for children. The 40th anniversary event will honor veterans and the community. Fun, games, and booths will be open at the Fountain City Park from 9 a.m. until 3 p.m., when a keynote speaker will talk and then veterans will be honored at the lake at 4:30 p.m.