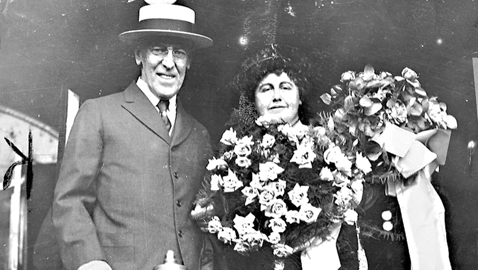 Woodrow Wilson was the first Democrat to be reelected to a second consecutive term since Andrew Jackson.  He had campaigned on the slogan, “He Kept Us Out of War” in 1916 and the President faced a serious opponent in the person of Charles Evans Hughes.  Hughes is the only person in American history to leave a seat on the United States Supreme Court to accept a presidential nomination.  A former governor of New York, Charles Evans Hughes was a majestic-looking man with a formidable white beard.  Hughes, more than one noted, looked rather like what one might imagine Jove to look like.  Not an especially warm person publicly, former president Theodore Roosevelt grumbled about the “bearded iceberg”.

The 1916 presidential election was quite close.  Both Wilson and Hughes were able orators and both campaigned hard.  Hughes swept the east coast, even carrying Wilson’s adopted state of New Jersey where he had been governor before being elected president in 1912.  The Electoral College came down to California and Hughes had made a mistake that would cost him the presidency.  Perhaps the most popular elected official in California was Governor Hiram W. Johnson, who was running for the United States Senate in 1916.  Both Hughes and Governor Johnson happened to be staying at the same hotel during the campaign, although apparently Hughes did not realize it.  Johnson, naturally, expected to receive either a visit or a call from the presidential candidate of his own party, but he was disappointed.  That particular oversight allowed California to slip into Woodrow Wilson’s column by just over 3,000 votes.

The election remained uncertain for a few days and when a reporter telephoned Charles Evans Hughes’s home, he was abruptly told that President Hughes could not be disturbed.  The reporter replied, “Well, when he wakes up, tell him he’s no longer the president.”

President Wilson lost his own Secretary of State as America crept closer to war.  Wilson had appointed William Jennings Bryan to serve as Secretary of State.  Bryan was perhaps the most personally popular Democrat in the country, having been nominated for the presidency by his party no less than three times and having lost three times.  Bryan had been instrumental in helping Woodrow Wilson win the 1912 Democratic presidential nomination over the favorite, Speaker of the House Champ Clark of Missouri.  In fact, Clark actually climbed to claim a majority of the delegates, but party rules required a nomination be made by two-thirds of the voting delegates.  Bryan, who had won election to the Democratic National Convention pledged to vote for Champ Clark, but he accused the Speaker of being supported by the Tammany Hall organization in New York and helped create momentum for Wilson.  Speaker Clark’s son, Senator Bennett Champ Clark, would make it his mission in life to change the two-thirds requirement to nominate a Democrat for president and he succeeded.

Bryan, a renowned fundamentalist and Christian layman, horrified many diplomats by refusing to serve alcohol while entertaining officially.  Bryan was also a pacifist and routinely cautioned the president about trespasses against the American government and her citizens by the British Empire.  Secretary Bryan insisted on a policy of strict neutrality and as the United States was drawn into the conflict, he could not in good conscience continue serving in the Wilson administration.  He resigned his office and was succeeded by Robert Lansing, who would, in time, run afoul of Edith Wilson.

Wilson’s pledge to keep America out of the First World War soon crumbled, especially with the aggressive submarine campaign waged by the German Empire.  Numerous American lives were lost at sea when ships were torpedoed by German submarines.  American passengers had been duly warned about booking passage on ships carrying supplies and munitions to Germany’s enemies.  Some Americans were eager to engage in the European conflict, not the least of whom was former President Theodore Roosevelt.  TR glorified war and accused the bookish Wilson of being a coward.  When Wilson made a speech and claimed there was such a thing as being “too proud to fight”, Roosevelt nearly had a stroke.  Even before the 1916 election, Roosevelt had pressed for American entry in the World War.  When the luxury liner the Lusitania was sunk on May 7, 1915, Roosevelt later made a memorable speech, referring to the one hundred and twenty-three Americans who had died.  Roosevelt’s speech mentioned President Wilson’s vacation home, Shadow Lawn.

In spite of his venomous criticism of President Wilson, Theodore Roosevelt had no compunction about petitioning his rival to form a division and go to Europe to join the fighting.  Badly aging prematurely, frequently quite ill, blind in one eye and seriously overweight, TR’s dream of fighting in the World War was hardly realistic.  President Wilson received Roosevelt cordially and tried to let his predecessor down as gently as possible.

All of the Roosevelt sons fought in the war and by all accounts, quite bravely.  All were wounded; some severely.  Unfortunately, one was killed.  Theodore Roosevelt’s glorification of war came at a high cost.  Quentin Roosevelt, the youngest of the former president’s children, was an aviator and shot down over German lines.  He was buried with honor and dignity by the Germans.  Yet, cruelty in politics and people existed even then and a photograph of TR’s dead son, his head shattered by bullets, was sent to the former president.

With Quentin’ death, something went out of Theodore Roosevelt.  His health began to deteriorate further and some felt the “little boy” in the boisterous man that was TR had died with his slain son.  Haunted by Quentin’s death, Theodore Roosevelt’s ambition burned as brightly as ever and when he died in January of 1919, he was planning to run for president again and would have been the likely Republican nominee and winner of the 1920 presidential election.  Death came for Theodore Roosevelt while he was sleeping and as one friend said, death had to sneak up on the former president unawares, otherwise there would have been a fight.

Woodrow Wilson managed to avoid the increasing pressure for America to participate in the World War until even he decided war was inevitable.  With the British, French, Russians and Italians fighting the German and Austro-Hungarian Empires, the fighting had reached a virtual stalemate.  The arrival of American troops tipped the balance to the side of the Allies and assured the defeat of the Central Powers.  The German Emperor, Kaiser Wilhelm II, was forced from his throne, as was the Austrian Emperor.  With the conclusion of the World War, the very face of Europe changed.  The dismantling of Empires created autonomy for new nations and self rule.  Dynasties which had ruled countries for centuries evaporated over night.

Tsar Nicholas II was forced to abdicate his own throne and sent into exile in Siberia.  Yet a worse fate awaited the last of the Romanov emperors; he and his family were taken to a basement room of the house where they were held and executed by the Bolsheviks who had seized power in Russia.  A firing squad mowed down the Tsar and his family; some, including the Tsar’s daughters survived the first volley.  As the acrid smoke began to clear, the Bolsheviks savagely bayoneted the Grand Duchesses to death.  The chief executioner noticed the thirteen-year old son and heir of the Tsar weakly moving on the blood soaked floor.  He bent over and fired two shots into the Tsarevich’s head, behind the ear.  The birth of a new Europe was born out of blood.

Woodrow Wilson arrived in Europe to help settle the peace and write a document that would ensure that same peace for future generations.  Wilson visited England, Italy and France and his welcome could hardly be imagined today.  Wilson was greeted not by thousands or even hundreds of thousands, but millions who screamed his name rapturously.  Likely no American president has ever received such an outpouring of adulation before or since.  Even school children were enthralled by President Wilson.  One little girl noted Wilson had no beard, leaving more room on his face for kisses.  Another little boy sighed he wished President Wilson would live forever.

Wilson finally settled in Paris to take his place amongst the statesmen of Europe.  Unlike most of his contemporaries who were prime ministers, Woodrow Wilson was actually a head of state.  Wilson began the difficult negotiations, struggling to traverse the complicated labyrinth of European politics.  Wilson soon grew exasperated with the demands of his allies, whom he felt were petty, greedy, irrational, and vengeful.  Wilson, working endlessly, soon began to feel ill.  Accompanied by his personal physician, Admiral Cary Grayson, and his wife, Edith, Wilson became increasingly gaunt and his coloring had become a dull gray.  Wilson’s digestion became impaired and he began suffering violent diarrhea.  The president also contracted a serious case of what was thought to be influenza, which confined him to his bed.  Considering the changes in the president’s mood and behavior, there is significant reason to believe he had suffered a thrombosis of the brain.

Even through his illness, Wilson had insisted upon working, but the president finally became so sick Dr. Grayson insisted he cease working.

During Woodrow Wilson’s stay in Paris, there were signs of the final illness that would virtually incapacitate him later.  It began with an involuntary twitch in one eye and soon one entire side of the president’s face would twitch.  Wilson’s demeanor also changed and he became highly irritable and oftentimes irrational.  His disgust with his allies made him short tempered and when he felt his colleagues were not negotiating in good faith, he threatened to leave the conference and return home to America.  Wilson’s constant threats caused the French prime minister, Georges Clemenceau, to grumble that Wilson was rather like the cook who kept her bags perpetually packed.

President Wilson’s behavior finally became just downright bizarre.  He had been quite suspicious of the household staff serving him and he told his associates they were all spies, reporting every word he said to the French government.  Wilson then decided the furniture in his rooms was badly arranged and the president enlisted the help of Dr. Grayson in rearranging the furniture over and over again.

Wilson never carried out his threat to desert the peace conference and finally helped to hammer out the Versailles Treaty and endorse Wilson’s dream of the League of Nations.  Ironically, it would be the harsh terms of the Versailles Treaty that would help to bring Adolf Hitler to power in Germany and set off the spark that became World War Two, making a mockery of the League of Nations, which Wilson passionately believed would end war for all time.

President Wilson’s popularity at home was sagging.  He had actually issued a call for the American people to elect a Democratic Congress in 1918 and was stunned and disappointed when the elections resulted in Republican majorities.  The man hailed as a savior in Europe was beginning to be viewed with suspicion in his own country.

It was Woodrow Wilson who changed the tradition first set by Thomas Jefferson of sending his State of the Union message to the Congress, which was read by a clerk.  Wilson came to Capitol Hill to deliver his address in person.  For all the acclaim he won in Europe, Woodrow Wilson came home to less than a tumultuous welcome.