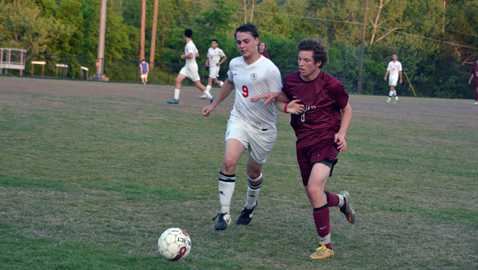 South-Doyle’s Allen Kidd (9) battles with Morristown West’s Matt Sawyer for the ball in the Trojans’ 3-0 win over the Cherokees Wednesday night in the District 2-AAA Tournament. Sawyer scored the first goal of the match.

All good things must come to an end.

Thus was the case for South-Doyle’s boys soccer team Wednesday night when the Cherokees saw their magical season come to a halt with a 3-0 loss to Morristown West in the District 2-AAA Tournament semifinals at Billy K. Nicely Stadium.

South-Doyle (13-3-1), the tournament’s No. 2 seed, seemed a step slow and the Trojans quickly pounced on their host.

“It’s hard to beat a good team twice and Morristown West is a good team,” South-Doyle coach Adam Massie said. “They brought it tonight and unfortunately, we beat them in the regular season and they got the one in the tournament.”

“Our guys did really well tonight and God gave us a chance to get some redemption and without Him, we couldn’t have done this and we wouldn’t be where we are,” Morristown West coach Todd Bradley said.”

The Trojans, who held the Cherokees to just one quality shot in the match, took a 1-0 lead when Matt Sawyer took a pass from Ike Hunsucker and buried it past South-Doyle netminder Connor Kirk in the 17th minute.

From there, the match belonged to Morristown West. The Trojans got seven shots in the first half and Kirk was stellar, although he had to feel like he was swimming with sharks all night.

“He’s a great keeper and he played really well,” Bradley said of Kirk. “He’s done that for them all year and I’m just honored to be where we’re at.

“This was a good game. Both teams played hard. Hat’s off to coach Massie. He’s done a great job with South-Doyle. All you have to do is look where they were last year and then look at where they are now.”

The Cherokees had a season to remember but they ran out of magic on this night.

“We made some great strides this year and these guys continue to pleasantly surprise me,” Massie said. “We learned a lot.

“We’re a really young team and we still have some things to learn and learning how to win is one of them.”

The Trojans expanded their advantage to 2-0 late in the first half when Jose Manuel scored in the 38th minute. Cole Collins was credited with an assist on the game’s second marker. Hunsucker closed the scoring early in the second half with an unassisted tally.”

Despite being held off the scoreboard throughout much of the second half, the Trojans held territorial advantage throughout the final 40 minutes.

“We possessed the ball and got a great effort from our forwards,” Bradley said.

Only a stellar effort from Kirk kept the score from becoming more lopsided.

“Connor has helped us a lot this year and he’s a big reason why we finished in second place this season,” Massie said.