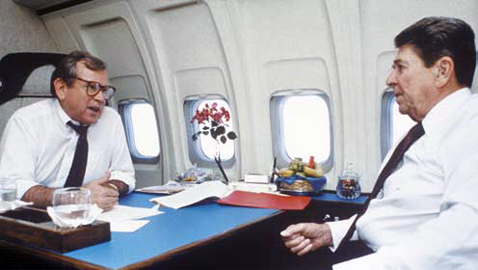 Publisher’s Note – I have asked our resident historian, Mr. Ray Hill, to write a special column noting the passing of Senator Howard Baker. Mr. Hill has been working on a lengthy series on Senator Baker’s career. Every member of The Focus staff joins me in sending our condolences and sympathy to Senator Baker’s family – Steve Hunley, Publisher.

The term “statesman” has been overused, but in the instance of Howard Henry Baker, Jr. it certainly applies.

Senator Baker, in every sense of the word, was the father of Tennessee’s Republican Party. Baker had passed up the opportunity to run for Congress when his father, Howard Baker, Sr., died suddenly the first week in January 1964. There is little doubt the younger Baker could have been elected, but he refused to run and urged his stepmother, Irene, to run instead.

Baker ran for the United States Senate that year and although he narrowly lost to Congressman Ross Bass, he won more votes as a Republican than any other candidate in Tennessee’s history. Two years later, Baker ran again and Senator Bass was toppled in the primary by Governor Frank Clement. Howard Baker beat Clement handily to become the first Republican ever popularly elected to the United States Senate from Tennessee.

Senator Baker gave of himself unselfishly to help make the Republican Party viable in Tennessee. Two years after Baker’s election to the Senate, the GOP won control of the Tennessee House of Representatives and elected a Speaker, something that was unthinkable just a few years earlier. In 1970, Republicans won both the governorship and Tennessee’s other United States Senate seat. The twin victories of Winfield Dunn and Bill Brock would not have been possible without Howard Baker. In 1972, Republicans won five out of the nine Tennessee Congressional seats and Senator Baker was easily reelected, defeating Congressman Ray Blanton.

Ironically, it was Watergate that brought Howard Baker national recognition and helped to decimate Republican candidates all across the country in the 1974 elections, not the least of which was Lamar Alexander, a Baker protege running for governor that year against Ray Blanton. The Watergate Hearings made Senator Baker a national figure and his question, “What did the president know, and when did he know it?” resonates still today.

Baker had twice before sought election as Minority Leader of the Senate; his father-in-law had been the late Illinois Senator and Minority Leader, Everett Dirksen. Twice Baker lost to Pennsylvania Senator Hugh Scott. Baker won by one vote in 1977. In 1980, following the election of Ronald Reagan as president and a new GOP Senate, Baker was elected Majority Leader.

Senator Baker was known as the “Great Conciliator”, a title he prized. Baker retired from the Senate in 1984, after serving eighteen years in the United States Senate. He would later serve as Chief of Staff for President Reagan and Ambassador to Japan in the administration of President George W. Bush.

After a lifetime of public service, Howard Baker came home to Tennessee.

While the Howard Baker Center will always serve as a reminder of Baker’s service to Tennessee and the nation, it was his character that remains remarkable. There was never any whiff of scandal surrounding Senator Baker, who was a truly gracious man, who promoted civility in politics. Howard Baker was absolutely honest and his service to Tennessee and the United States set a high standard and should serve as a beacon for others to follow in the future.