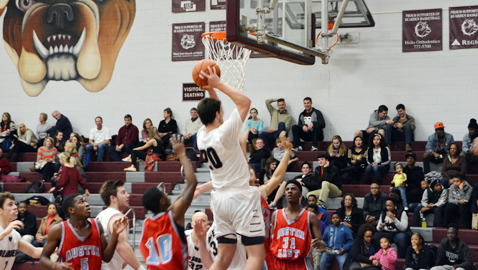 Bearden’s Austin Duncan (20) shoots a layup while Austin-East defender Lucky Clark looks on. Duncan scored 18 points for the Bulldogs in a 92-63 win over the Roadrunners Thursday night. With the win, Bearden kept its perfect record intact.

Bearden High School boys basketball coach Mark Blevins knows how to motivate his team by appealing to his players’ desires.

“If it were up to me, I would practice every day until Tuesday,” Blevins said after his Bulldogs kept their perfect record intact with a 92-63 win over Austin-East at home Thursday night. “But I told them that if they were undefeated at the [holiday] break that I would give them some time off and now, they will have six days off.”

Bearden (14-0) came out firing against the Roadrunners. The Bulldogs boasted a balanced scoring attack and opened a 20-12 lead by the end of the opening quarter. From there, Bearden just kept expanding its lead against the young Austin-East squad and it was apparent that Bearden wanted an extended hiatus from basketball over the Christmas holidays.

Senior center Jason Smith led the way for the Bulldogs as he scored 20 points and pulled down 16 rebounds. He converted 10 of his 16 field goal attempts. Senior guard Austin Duncan scored 18 points. Will Snyder scored 11 points and hit three 3-pointers after halftime for the Bulldogs. Sam Phillips and Adam Fulcher scored nine points apiece.

While the Bulldogs posted another dominant victory against Austin-East (7-4), Bearden’s latest effort was far from perfect. After halftime, the Dogs got a little sloppy on the glass and had a few turnovers that helped the Roadrunners pull to within 56-40 midway through the third quarter.

Starting point guard Quez Fair was saddled with foul trouble all night and Blevins noted that not having Fair in the lineup hard at times.

“He had severe difficulty [with foul trouble],” Blevins said of Fair. “I think he played about 10 minutes tonight and when he’s not in the game it hurts us.”

While Fair was in foul trouble, freshman Dakota McGowan handled the point guard duties and Blevins said that he was pleased with the youngster’s play and his team’s unblemished record. McGowan scored five points (all after halftime).

“We’re tickled with our record and I’m really proud of Dakota,” Blevins said.

“Coach Blevins is a great coach and he knows how to motivate his kids and he’s a good person too,” Stanton said. “He’s one of those guys like [Fulton coach Jody Wright] and [former Austin-East] coach [Charlie] Mitchell that you just want to sit in a room and listen to.

“Bearden is a great team and we took a butt whooping tonight. We’re just not getting anything out of our post players right now.”

The Lady Bulldogs (12-2) led 19-10 after the first quarter before running past Austin-East. Bearden’s defense was especially stingy after the opening frame as the Lady Roadrunners scored just nine points over the final 24 minutes.

Rice was one of three Bearden players to score in double figures. Holly Hagood finished with 15 points and freshman guard Trinity Lee finished with 10.

Kierra Marsh led Austin-East with nine points but Bearden kept her off the scoreboard after halftime.