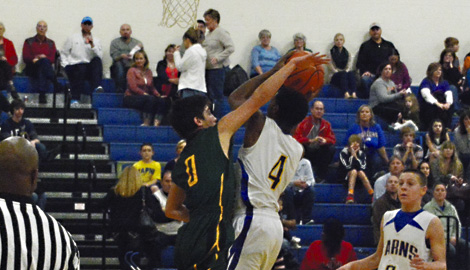 Karns Middle’s Cartez Campbell attempts a layup as Cedar Bluff’s Ethan Stone defends. Campbell scored 12 points to lead the Beavers to a 74-27 victory over the Giants.

Karns Middle School boys basketball coach Lynn Allen knows that his team must get contributions from every player if it is to be successful. Allen and the Beavers found the balance they were looking for Thursday night.

And the result was a 74-27 victory over Cedar Bluff in a Knox County Middle School Basketball Conference game at KMS’s Thomas L. Duff Memorial Gymnasium.

Not every player on the Beavers roster scored but everyone made a big play. Karns rebounded, played defense and made free throws en route to posting the lopsided victory.

“I’m really happy with the effort and everyone contributed,” Allen said after his team improved to 8-4 overall and 4-2 in the KCMSBC. “We made our free throws.

“We were 14-for-20 and we’ve had missed free throws hurt us in some games. We improved on our free throws tonight.”

Karns darted to an early lead and never looked back Thursday. The Beavers’ defense made life miserable for the Giants all night long. Karns ran its half-court offense flawlessly at times. The Beavers’ pressure forced a slew of Cedar Bluff turnovers and Karns took advantage of its opportunities all night. The Beavers featured a balanced scoring attack and it all added up to a big wins as the Giants were never really in the game.

The Beavers opened a 19-7 lead by first quarter’s end and from there, the advantage continued to grow. Karns scored 19 more points in the second stanza and opened a 38-11 halftime lead.

After the break, things would only get worse for the Giants, despite the fact that the Karns starters were all on the bench midway through the third quarter.

The Beavers scored the first seven points of the frame and opened a 45-11 lead midway through the frame. Cedar Bluff finally broke a long scoring drought when Ethan Stone converted a pair of foul shots.

Stone scored eight of the Giants’ nine points in the third quarter. The other Cedar Bluff point came on a free throw from Declan Brophy. Cedar Bluff made just 10 field goals in the game.

Stone was the Giants’ leading scorer. He finished with 11 points (including 10 in the second half.

Allen said he was pleased with the victory but he noted that he had more important things to be happy about. Those occurred before the Beavers even took the court against the Giants.

“No one likes to win more than I do,” he said. “But our goal here is to make our better players.

“We had several players turn their lives over to the Lord during a pre-game meeting and that was an even bigger victory for me.”