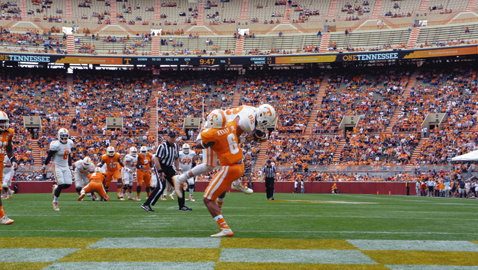 Photo by Dan Andrews.
Tennessee sophomore tight end Ethan Wolf hangs onto the football for a touchdown in the annual Orange & White Game, which was played on April 25th at Neyland Stadium.

Five weeks and 15 practices are over, and now the long wait for the 2015 season begins for Tennessee.

On Saturday, April 25th, the Vols played their annual Orange & White Game in front an announced crowd (sarcastic cough) of 63,016.

So what did we learn about this team after the scrimmage?  What that game and those March/April workouts themselves told us is up for debate as well.

“For the most part I thought a very, very productive spring, especially when you add the 13 individuals that had to sit out spring,” said Tennessee head coach Butch Jones. “But as I’ve said and I’ll continuously say, this summer is absolutely critical for the development of this football team.”

In all 16 Vols were ruled out for the Orange & White Game due to injury.  Thankfully one of those was not quarterback Joshua Dobbs.  For the first time in the Butch Jones era of Tennessee football, the Vols will enter fall camp knowing who their starting quarterback will be for the opener.

“The mark of great players is that they elevate other players around him, and they bring them along, and Josh is staring to do that,” said Jones. “Is he a finished product? Absolutely not. Does he still need consistency? Yes. But I like where he’s going.  Having Josh, I think it’s healthy for our football team too. They view him as their leader. He’ll be in charge of throwing this summer and doing some things. Like you asked about the summer, that’s where even his growth and maturation continue to grow over the summer months.”

“I’m very excited moving forward, both on offense and defense,” said Dobbs. “We took a lot of steps forward this spring. We installed a lot of good things and are playing with a lot more tempo and control of the offense and defense. You can just see it. Everyone’s playing with a lot more confidence. The guys are definitely excited heading into the summer and heading into the season.”

Tennessee is coming off its first winning season since 2009, including a 45-28 victory over Iowa in the TaxSlayer Bowl.  Expectations are growing for a program hoping to win its first SEC East title since 2007.

“It’s an exciting time. I think winning a bowl game for a young football team is important.  Kind of gives you a little bounce in your step during the spring and into the summer program,” said former Vol and current Denver Broncos quarterback Peyton Manning in an interview with the SEC Network during the Orange & White Game.  Manning was in town for the game and to announce a $3 million leadership gift to UT from himself and his wife Ashley.  “It’s an exciting time for recruits to be a part of Tennessee football and I think this team is excited about the upcoming season.”

“You want to be a part of a football program, now, that everyone respects,” said Jones. “It’s a complete different change, a role reversal for them. That is what you want. That is why you work hard to put yourself in those situations. That is part of the excitement. That is why you come to the University of Tennessee. You get the opportunity to bring the Tennessee football back to its rightful place. That’s what we talk about in recruiting, and it’s real. You don’t have to sell it. It’s real. The competitive individuals want that. They want it. They want to be a part of a program that has high standards, high expectations. This is the best place in college football. Yeah, we have been down a little bit, but every program goes through that. We have to be patient. It’s part of the process.”

“For the most part, there’s a care factor. Guys want to be out there. Guys love this game,” said Tennessee defensive back Cam Sutton. “They don’t take it for granted. You see it out on the field. They’re energized. They’re passionate. They’re jumping around. A lot of guys are eager off the field in the weight room and even in the film room, constantly watching film late nights and early mornings, just trying to progress and get better overall.”

The Vols open the season against Bowling Green on September 5th in Nashville.