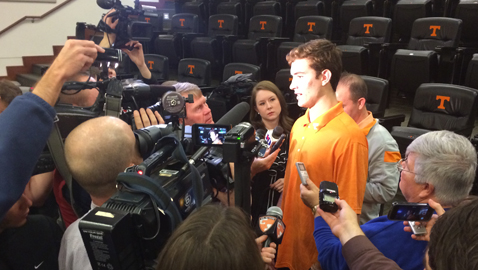 Tennessee freshman quarterback Quinten Dormady meets with the Knoxville media for the first time. Dormady is one of ten early enrollees already on campus as part of the Vols Class of 2015.

In 2014 the Tennessee Volunteers had a winning season for the first time in five years, back when Lane Kiffin was head coach.  They also picked up their first bowl game victory since 2008, back when Phillip Fulmer was head coach.

Butch Jones has this football program on the upswing, and Tennessee hopes that an influx of new talent will help that trend continue.  Ten early enrollees have already arrived on the UT campus.

“It felt so great to finally be down here,” said freshman quarterback Jauan Jennings.  “To finally be a part of the team, not just the recruiting class… it was a blessing and I gave glory to God then and there.”

“I’m ready to get started.  It’s the family environment, the great relationship with the coaches, and the fan base is incredible,” said freshman defensive lineman Andrew Butcher.

“It’s just the vibe here… Coach Jones has the program going in the right direction,” said redshirt sophomore running back Alvin Kamara.  “Everybody remembers when Phillip Fulmer was here… the running backs like Arian Foster, Jamal Lewis… times like that when Tennessee was close to the top. They dropped off a little bit but Coach Jones has the program in the right direction, so that is something that I wanted to be a part of.”

The rest of the Class of 2015 will arrive in Knoxville this June.  But for now, some student-athletes are getting a crucial head start, in learning the ins and outs of Tennessee football.

“It’s been good, meeting my teammates, hanging out with them,” said freshman defensive lineman Shy Tuttle. “I feel like it is very beneficial, looking forward to next season. I’ll be ahead and comfortable with the coaches and the playbook.”

“It was important. I wanted to go through the spring and get a jump start on the offense before camp started so I can be a step ahead, get everything going that I need to get going so I can contribute when the season comes,” said Kamara.

“It’s huge for all the guys to get in the rhythm of it, get around the guys before spring practice,” said freshman quarterback Quinten Dormady. “That’s huge getting to go through that. I want to get bigger, put on some weight, get stronger, and work with the guys.”

Tennessee has proven that they aren’t afraid to give newcomers an opportunity.  24 first year players saw action last season, with 11 of them crashing the starting lineup.  That chance to get on the field right away was appealing during the recruiting process.

“If you are gonna do something, you do it to the best of your ability,” said Jennings.  “There’s no reason to come here expecting not to play.  They want players coming in here expecting to play. This is the SEC and great players are everywhere.  You walk down the hall and you are gonna see a great player, a teammate… you don’t look down at anyone but it is about work ethic.”

“It was something they brought up I didn’t pay a lot of attention to it but it just shows that they are gonna play young talent,” said freshman defensive lineman Kyle Phillips. “They don’t care if you are a senior or a junior.  If you are a freshman and you can come in and play they are gonna play you right away. So that is something that kind of excited me a little bit.”

“It factored in a little bit,” said Kamara. “Being redshirted my freshman year (at Alabama) then a year removed going to Hutchinson Community College… this is my redshirt sophomore year. I’m just trying to get on the field and show what I can do.”

Last year Butch Jones brought in a consensus top ten class, and it looks like this group could make the top five nationally.  Tennessee is trying to get back to the top of the SEC.  If recruiting is any indication, the Vols are on the right track.  National Signing Day, an unofficial holiday in the South, is right around the corner on Wednesday, February 4th.