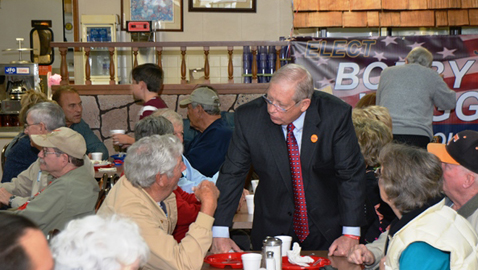 Bobby Waggoner announced his intent to run for Knox County Sheriff at a press event last Wednesday at Market Square.

“As some of you know, I retired as Chief of Detectives with the Knox County Sheriff’s Office on Sept. 1st,” Waggoner told those assembled. “I began meeting with people across Knox County to explore the possibility of running for Sheriff.

“Those I have met with have shared with me their concerns about the present and their hopes for the future. As a result of those discussions, I am announcing my candidacy for Knox County Sheriff in the May 2014 Republican primary. I enter this race with gratitude for all this community has meant to me and my family for many generations, and with heartfelt enthusiasm about the opportunity to give back to the people of Knox County in this important way.

“As I have traveled this county, I have repeatedly heard Knox Countians say they want respectful, mature, responsible leadership from their next Sheriff. They deserve no less. The people of this county also deserve a full-time Sheriff who will focus every single day on what is best for our community. That is the kind of Sheriff I will be. With more than 44 years as a law enforcement professional, I have the knowledge, the experience and the education to lead the Knox County Sheriff’s Office on a better path to the future.

“In making this announcement today, I want to be very clear that I have nothing but admiration for the hard-working, dedicated men and women of the Sheriff’s Office.”

Bobby Waggoner is a native of Knox County who grew up in the Karns community and graduated from Karns High School, where he was captain of the football team his senior year.

He entered Tennessee Tech in Cookeville with both football and baseball scholarships, but his education was interrupted when he was drafted into the Army in 1966. He served two years and returned to Tennessee Tech in the fall of 1968.

He married Knoxville native Kathryn Allen in February of 1969 and was hired by the Southern Railway Police Department in Birmingham, Ala., as a special agent that same month. Unlike local law enforcement agencies, railroad police officers have the ability to work across state lines, and Bobby quickly found himself leading complex, multistate investigations.

For the next 32 years, Bobby worked for Southern Railway and Norfolk Southern, eventually working his way up from Special Agent to Division Chief of Police to a senior role where he supervised more than 75 agents across five states. During those years he continued his education, receiving a BS degree in Social/Behavioral Science with a major in Criminal Justice from the University of Alabama at Birmingham in 1975 and a Master of Public Administration degree with a major in Justice Administration from Columbus State University in Columbus, GA in 1998.

In 2001, Bobby retired from Norfolk Southern Railway Company and moved his family to Knoxville. He began working with the Knox County Sheriff’s Office as Assistant Chief Deputy/Administration. In February of 2007 he was appointed Chief of Detectives for Knox County, the position he held for more than six years until his retirement in September of 2013.

Bobby’s family has a long history of distinguished public service. His grandfather, Bernard L. Waggoner Sr. served three terms as Knox County Sheriff, and his father, Bernard L. (Beefy) Waggoner Jr. retired as a captain in the detective division after 26 years with the Knoxville Police Department. His sister, Brenda Waggoner, retired in 2006 after many years of service as a Knox County General Sessions Court Judge.

And now, with more than 44 years of experience in law enforcement, Bobby Waggoner continues that proud family tradition of public service with the goal of becoming Knox County Sheriff.