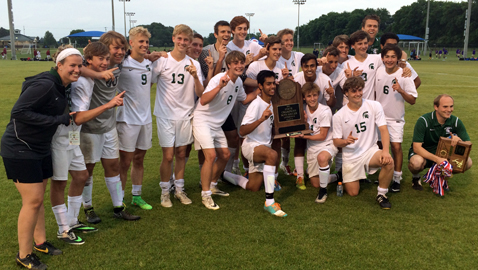 But the ending more than made up for the tension.

On Thursday, May 21st, the Webb School Spartans withstood a furious second half rally from defending state champion Battle Ground Academy, on their way to a 2-1 victory in the Division II-Class A championship game.

It is the second state title in boys’ soccer for Webb School.

“It has been a magical season for us,” said Webb’s first year coach Jordan Wormsley.  “Just to watch these boys play with so much joy and passion.  It’s incredible to watch.”

And in the first half the Spartans were absolutely the fresher team.   Webb junior Connor Jacobs scored two goals and the damage could have been much worse.  Junior Nick Taylor made four Wildcats miss but hit the post on his shot attempt.  Another attempt had to be cleared off the goal-line.

“In the first half our passing was amazing,” said Jacobs. “We were moving the ball and taking good shots.”

“We were playing very good possession,” said Webb junior Kell Gammeltoft.  “We were getting one or two touches and almost holding it too long… just very efficient soccer.  No one was hogging it.  It was clean, it was fast, and the other team couldn’t adapt to that until halftime when they took a step back and looked at the field.”

But in the second half the roles were reversed.  Suddenly, the Wildcats were the ones pressing the action.  And with 26:33 remaining, Battle Ground Academy made the most of a set piece.  Braxton Kinney put the ball in the box, and eventually Harm Abbott knocked it over the goal-line.

Suddenly, it was only a one goal game.

“It was a little bit scary,” said Wormsley. “We talked at halftime that if they got one, they would be right back in the game.  And it would be a dogfight until the end and it absolutely was.”

“It was extremely frantic,” said Gammeltoft. “Not a fun time to be on the defense.  It is always frantic when you are up a goal… (Opponents) always have a final surge to get one back.  They were throwing everything they had at us.  We played against CAK this season, which was a 2-1 game almost identical to this game and this ending.  Very frantic and fast paced.  So we had experience with that type of game.”

The final 26:33 was filled with opportunities for the Wildcats to even the score, but time and time again goalie Elo Wittig and the Spartans defense stood tall.

Even when Taylor received a red card with less than two minutes to go and the Spartans were down to ten players, Webb School continued to block shots and took no chances in clearing the ball out of danger, holding on for a 2-1 win.

“You have to give all the credit in the world to that team (BGA),” said Wormsley. “They played their hearts out.  It was a physical battle to the bitter end.  They have no reason to hang their heads.  They should be proud of the effort they put forth.  They played a fantastic game.”

“It shows that we can go through anything,” said Gammeltoft. “All the adversity.  The whole season we have been winning and our team never stops fighting.”

Webb finishes with an 18 game win streak, their only loss coming in the season opener to Bearden.   The memories from this title game, and this season, will last a lifetime.

“Well it’s my first one (title).  That’s pretty special,” said Wormsley.  “All the different personalities that mesh and gel together and work as one group, it is incredible.   If you look at our stat sheet from this season we have a number of guys that are pretty even on goals and assists.  Everybody has played at some point in the season. And everyone has played a crucial role for us at some point in the season. It is just a total team, which is what I am most proud of. We stuck together through so many different things.  It has been a pleasure.”