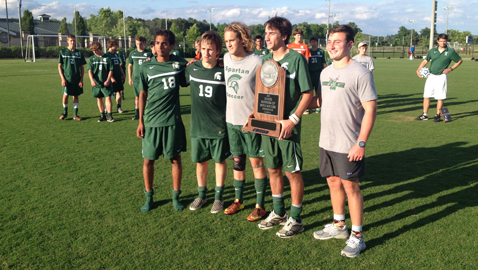 The Webb Spartans boys’ soccer team made the trip west… looking for two victories and a second straight state championship.

They left one win and one title shy of their goal.

On Thursday, May 23rd, the Spartans fell to St. George’s Independent School 2-1 in the Division II, Class A championship game at the Richard Siegel Championship Soccer Complex in Murfreesboro.

“We have a lot of pride… it was quite an achievement just to make it, to be in this game,” said Webb head coach Seth Harbin.  “This was a winnable game. We weren’t outclassed.  That’s just the way it goes sometimes.”

The Spartans (14-6-1) were playing with some heavy legs.  About 15 hours before the finals kicked off, Webb finished up a semifinal to remember.

The Spartans bested Evangelical Christian School 2-1.  But that game was extended through 80 minutes of regulation, 30 minutes of overtime and 10 rounds of penalty kicks.

Webb held their own in a first half that didn’t see many scoring chances for either team.  However, the Gryphons struck first in the final minutes of the opening stanza.  Peyton Schelp’s cross was collected by a late attacking Nicholas Sims.  He had lots of net to work with and put it past Spartans keeper Jackson Lansing.

It was 1-0 St. George’s at intermission.

Webb started the second half stronger and willing to take more offensive chances.  About nine minutes in, they were rewarded when junior midfielder Ramzy Abidi sent a free kick towards the net.  Senior Townes Bouchard-Dean was credited with the goal on a deflection.

The game was tied at one and it appeared that Webb had all the momentum.

But less than thirty seconds later, the Gryphons took that momentum right back.  A loose ball just inside the Webb box was taken by St. George’s freshman forward Peyton Schelp, who knocked it just inside the right post.

That made things 2-1 St. George’s, and forced Webb to once again play catch up.

The Spartans kept the pressure on. Abidi, Zahir Shaikh and Robby Strachan continued to work toward tying the game, but it was not to be.

Still, the Spartans should be congratulated on a terrific season.  With only five seniors on the roster, the future is bright for this program.