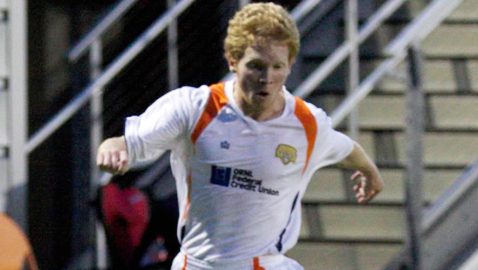 Knoxville Force midfielder Tom Webster moves the ball in a recent match at Regal Soccer Stadium. Webster, a Bearden High School and Maryville College graduate, has played for the Force for two seasons. He was the Gatorade Player of the Year during his junior season with the Bulldogs and played on Bearden’s 2006 State Championship team.

Tom Webster relishes his opportunity to play semi-pro soccer in his hometown.

“This is really fan,” said Webster, a midfielder for the Knoxville Force. “It nice to play because of the proximity and it’s also nice because it’s hard to come to the realization that one day, you won’t be able to play anymore.

“This is also fun because this league is not super serious. When you play in high school and college, it sometimes becomes a chore.”

During his high school days, Webster starred at Bearden High School and was named Gatorade Player of the Year during his junior season with the Bulldogs in 2007. He also played on Bearden’s last Class AAA State Championship Team in 2006.

After his stellar prep career, Webster took his talent to Maryville College. He played for the Scots and graduated in 2012 with a degree in Business and Organizational Management. He now works as a bicycle technician.

“We had more local guys on the team last year than we do this year,” Webster said. “It’s nice to play with those guys again.

“I played against a lot of them in high school and I played with some of them on club teams. We also have a great coaching staff.”

Webster and his teammates aren’t paid to play but that doesn’t seem to matter to him.

“For guys like me who have graduated from high school and college, this is something to look forward to every week,” Webster said. “Practice is fun.”

The Knoxville Force, which is in the midst of its third season, practices twice weekly at the Johnny Long Complex. The team plays its home matches at the University of Tennessee’s Regal Soccer Stadium.

“It’s highly competitive and we play at a great facility,” Webster said. “We’re lucky that they let us use that.

“We also practice at Johnny Long’s and that’s a great place.”

“You have a whole city on your back and we want to compete and we want to represent when we play against Chattanooga’s team, Alabama’s teams and Georgia teams.”

When Webster is not playing soccer, he enjoys golf, hanging with his friends and biking.

“I usually just do the normal things,” he said. “I like to travel and play pickup soccer games with my friends. I like to play golf and bike, but I’ve put those things on hold during the Force’s season.”