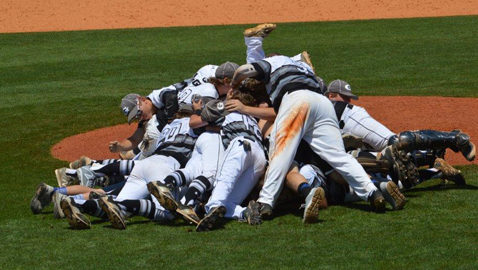 PHOTO BY TINA ADKINS
Grace Christian Academy celebrates the TSSAA Class A state baseball championship
with the traditional dogpile in Murfreesboro Friday. It was the school’s first-ever state
team title.

By Steve Williams
There were some anxious moments as Grace Christian Academy’s
baseball team closed in on the school’s first-ever state team championship.
Coach Mitch Turner was admittedly pacing in the dugout.
After two quick outs in the bottom of the seventh inning,
Summertown managed to load the bases and suddenly was a base hit
away from tying the game or winning it.
Turner asked for time and went on the field for a conference with his
team.
“I told them, ‘This is what we prepare for. This is why we don’t cut
corners. This is why we finish every sprint. This is why we finish every
workout. We have prepared for this. So go finish it!’”
Senior pitcher Tanner Gee induced a game-ending ground ball to
second baseman Noah Gent and worry transformed into jubilation as
Turner’s Rams celebrated an 8-6 win in the Class A championship game at
Middle Tennessee State University in Murfreesboro last Friday afternoon.
Making its fifth straight trip to the state tourney, GCA (32-12) finally
brought home the gold. The Rams were state runners-up last season.
“It is an honor to be the first team to win a state championship,
especially with all of the great teams that GCA has had in all sports,” said
Turner.
Both starting pitchers – the Eagles’ Ty Riddle and Grace Christian’s
Justin Shaw – were roughed up in the first inning of the title game as
Summertown (34-11) seized a 5-3 lead.
The Rams tied the score in the second, took the lead with three runs
in the fifth and held on.
Micah Wheeler worked 4 1/3 innings to get the win and Fee finished
it with two shutout innings for the save.
Fee also contributed significantly on offense, with two doubles, two
runs scored and one RBI.
Gent, an eighth grader, chipped in a double and single and drove in
one run. Senior shortstop Chandler Adkins also had two hits. Luke
Shepherd had one single and was credited with four RBI.
After winning its first two games of the double-elimination tourney,
Grace was handed a 6-3 loss in eight innings by Boyd Buchanan on
Thursday. Hunter Ross started the game on the mound for GCA and
Wheeler took the loss.
The two teams met again Thursday in an elimination game and the
Rams stayed alive as Fee hurled a four-hitter with nine strikeouts.
Shepherd went 3 for 4 and drove in one run. Adkins and Fee each
had two hits.
In its opening 9-1 win at the state, Grace led Boyd Buchanan by only
1-0 after four innings but broke the game open with four runs in the fifth and
four more in the sixth.
Fee had a pair of singles and three RBI for the Rams. Shaw, the
winning pitcher, went 2 for 3 with a double. Wheeler had a two-bagger and
two RBI.
Grace also had a slow start in Game 2 but again finished strong and
beat Cornersville 11-2. The Rams, falling behind 1-0 in the first inning,
unleashed a 16-hit attack and scored four runs in the second and two more
in the third to take command.
Adkins led the GCA attack with a 3-for-4 performance that included a
double and four RBI. Coffman and Shaw chipped in three singles each.
Winning pitcher Nathan Atkinson did not allow an earned run and
struck out eight.
“As I have said before, this team is special,” repeated Turner. “We
made a decision when I came here to keep God at the center of all we do,
and this is how He rewarded us. We still fail every day, but we always keep
our eye on Him.”