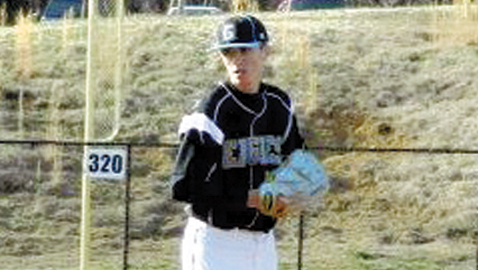 Andrew Willis, a left-handed pitcher and outfielder for Gibbs High School, recently committed to Tusculum. He’ll sign a National Letter of Intent in November at Gibbs.

Andrew Willis will soon begin his final season with the Gibbs High School team. He’ll do it with a huge weight off his shoulders.

The Eagles’ senior left-handed pitcher and outfielder put an early end to his college recruiting process when he committed to play collegiately at Tusculum College.

“I talked to Carson-Newman and Tusculum was the only school that made me an offer and when they offered, I committed, “Willis said. “Now, I’ll be stress free and I can be a student-athlete [for Gibbs] and look forward to finishing my senior year.”

Willis is one of 11 senior baseball players at Gibbs and he’s the first player in a talented senior class to commit to play in college. He’ll make his decision official when he signs his National Letter of Intent on Nov. 13.

Willis said that he was a natural fit for Tusculum.

“It just felt like home and I look forward to playing for coach [Doug] Jones,” said Willis, who played travel ball for the Knoxville Stars. “The campus was nice and the facilities are top-notch.”

While with the Stars last summer, Willis helped lead his team to the Continental Amateur Baseball Association Championship. He threw a two-hit shutout that was the title-clinching game of the CABA World Series in Charleston, SC. He had two tournament wins and was named the event’s Most Valuable Player.

He plans to major in Business Management or Sports Marketing and he noted that the city of Greeneville and the school’s small size reminded him of the environment in Corryton and Gibbs High School.

“Fans come out and watch us play every weekend,” Willis said. “It’s a lot like Gibbs.

“Tusculum just feels like home and I really enjoyed the facilities. Tusculum plays in a big ball park. The Greeneville Astros [an Appalachian League minor league affiliate of Houston] play there and everything is top notch. The small class size also really appealed to me.”

Many college athletes venture into unknown territory when they go away to school. This won’t be the case for Willis. His family once resided in Greeneville and he began playing baseball for the Greeneville Marlins travel team.

He’ll also have his family close by. His mother and father will be able to make frequent trips to his games. He also has relatives in Johnson City; those include his brother Justin (a standout pitcher on Gibbs High’s 2010 Class AA State Championship State Championship Team). Justin is attending East Tennessee State University and Andrew said he wanted to stay close to home.

“Honestly, I wanted to have my family be able to see me play,” Andrew said. “That was a big part of my recruiting process. My family provides me with a great support system.”

With his college decision behind him, Andrew Willis can now concentrate on helping the Eagles win a District 3-AAA Baseball Championship. Gibbs moved up to Class AAA last season and its stay at the district tournament was short. Willis and Halls pitcher Andrew Sylvester were embroiled in an extra-inning marathon that was a classic pitchers’ duel.

Gibbs came up on the short end of a 2-1 decision and had their season end with a loss to Clinton the next night and that didn’t sit well with Willis or the Eagles.

“When the season ended last year, all the [rising] seniors and a few juniors had a meeting and things really hit home for us,” Willis said. “We want to win a district championship and we want to go to state and I think this is the year.”