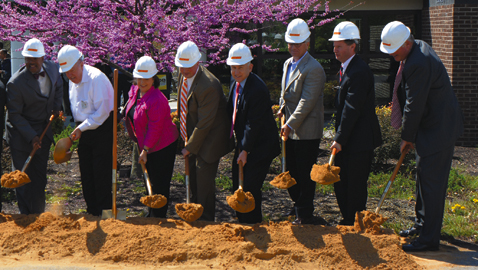 By Tasha Mahurin
tasha@knoxfocus.com
The ground breaking ceremony for the expansion of the Knox County Juvenile Court boasted a virtual Who’s Who of government.  Juvenile Court Judge Tim Irwin, an unmistakable presence with his height of 6 feet and seven inches, sat under a tent as Circuit Court Judge Dale Workman warmed up the crowd of more than 200 people.  Both Knoxville Mayor Madeline Rogero and Knox County Mayor Tim Burchett spoke, as did Tony Norman, Chairman of the Knox County Commission.
The current facility, named for the late Juvenile Judge Carey E. Garrett, is to undergo an 11,000 square foot, $3 million expansion.  Judge Irwin hopes the expansion of the Division Street juvenile court will create a more consolidated process.
Currently, three Child Support magistrates hold hearing on the third floor of the old Courthouse in downtown Knoxville.  Juvenile Court hearings are held at the Division Street facility, which sits beside the Richard L. Bean Juvenile Detention Center.  Cathy Quist Shanks, the Clerk of the Circuit, Civil Sessions and Juvenile Courts, maintains a staff at both the juvenile facility and at the old courthouse.
“Judge Irwin’s vision should make things much easier for everyone,” Shanks explained.  ”It will basically put all juvenile services at one location.”
The expansion, recommended by Mayor Burchett and funded by the Knox County Commission, will create room for Child Support Division magistrates and personnel.  New courtrooms will be built and Mayor Burchett and the County Commission helped fund the project by making cuts in other parts of the budget.
“This expansion should streamline the entire process,” Judge Irwin said.  “It should prove to be more efficient and eventually perhaps be a savings to taxpayers.”
Locating all juvenile matters in one location will eliminate the need for the judge and other personnel to travel back and forth, as well as citizens who oftentimes find it frustrating in an already emotionally charged process.
“I think the expansion and consolidation of the two divisions is a good thing,” Knox County Mayor Tim Burchett told the Focus.  “Often families and children who have business in these courtrooms are shuffled back and forth between these two location, and the situation is already traumatic enough.”
Other benefits of the expansion include more room for families to wait on court day, which is often a tense and stressful situation, particularly in a crowded waiting room.  Additionally, there will be ample and free parking for citizens at the Division Street building.
Irwin, recognized as a non-nonsense, yet compassionate judge of the Juvenile Court, has spearheaded the expansion and made brief, but gracious remarks at the ground breaking ceremony.
Steve Hunley, publisher of the Knoxville Focus, commented, “Tim Irwin is a great judge and Cathy Quist has the best constituent service operation in the county as Juvenile Court Clerk.  They are a great combination for the people of Knox County.”