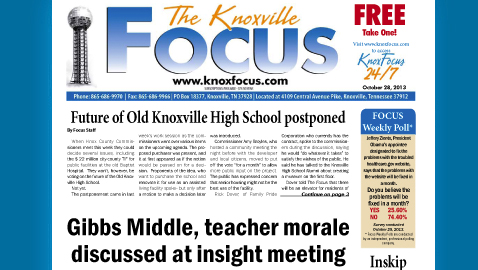 When Knox County Commissioners meet this week they could decide several issues, including the $ 22 million city-county TIF for public facilities at the old Baptist Hospital.  They won’t, however, be voting on the future of the Old Knoxville High School.

The postponement came in last week’s work session as the commissioners went over various items on the upcoming agenda. The proposed purchaser was present, and it at first appeared as if the notion would be passed on for a decision.  Proponents of the idea, who want to purchase the school and renovate it for use as an assisted living facility spoke- but only after a motion to make a decision later was introduced.

Commissioner Amy Broyles, who hosted a community meeting the night before with the developer and local citizens, moved to put off the vote “for a month” to allow more public input on the project. The public has expressed concern that senior housing might not be the best use of the facility.

Rick Dover, of Family Pride Corporation who currently has the contract, spoke to the commissioners during the discussion, saying he would “do whatever it takes” to satisfy the wishes of the public. He said he has talked to the Knoxville High School Alumni about creating a museum on the first floor.

Dover told The Focus that there will be an elevator for residents of the assisted living facility along with other improvements. He also plans to keep the historic features of the building, and, going forward, will hold public meetings to get input from alumni and neighborhood citizens.

Broyles said she thinks the public “has been misinformed” and said that senior citizens are “appropriate neighbors for that part of town.”  Concerns also included the idea that an assisted living facility would be for low income or subsidized housing. Dover addressed that directly by stating that there’s a need for more assisted living in the area for residents who have an income higher than the poverty level.

Some were opposed to the delay and called the recommendation to sell the school to Family Pride for $ 500,000, which is above the estimated value, “a fair process.” The appraised value of the school is $ 410,000.

“It has nothing to do with the process,” Broyles said, adding that she feels there was not adequate time to vet the proposal.

Dewhirst Properties, one of the bidders for the site, promoted a residential unit concept many claim would have brought younger people to the Fifth Avenue downtown building.

Dover said his plan calls for services to the seniors living there that would include, if they wished, on site meals, transportation, a support staff, a wellness center, salon, and other services all paid for by the residents in a monthly rate.

“People are outliving their money,” Dover said, explaining that his partnership with Southeast Housing in the project, would permit  affordable living because the partner is a nonprofit group and savings of financing the project could be passed on to residents.

It now appears there will be more public hearings on the matter leading up to a commission decision which could come in their regular meeting in two weeks.

Broyles said she understands that the proposal is “absolutely not subsidized housing, not a Section 8, and would never be public housing.”