This week marks my 400th essay for The Knoxville Focus. One might consider this as a milestone and invoke special verbiage. However, what’s on my mind is a topic relevant in all circumstances.

During my recent illness family, friends and fellow parishioners often said they were thinking and praying for me and my doctors. In our part of the world we often say, “You’re in our thoughts and prayers.”

Humans are social creatures, and those in solitary confinement are observed to wither without human interaction. You could say a large part of our nature is dependence upon others, so prayerful and thoughtful consideration connects us with each other like a group hug and with powers beyond us all.

It is said that there are no atheists in foxholes. And since all of us encounter the “foxholes” of life, it is probable that we all pray at some time or another. In the movie, It’s a Wonderful Life, George Bailey (Jimmy Stewart) finds himself in severe financial trouble. Bailey implies he’s not a spiritual man, but in his desperation he lifts his eyes and thoughts in prayer.

In all of recorded history humans have had a sense of the sacred, until the Enlightenment. The Age of Reason saw its acme in this 18th century European philosophy. The hope was that the abuses of church and state would be replaced by liberty, reason and tolerance. It didn’t work out as planned. The French Revolution’s motto of “liberte, egalite and fraternite” soon devolved into the “reign of terror.” Robespierre was a principal leader of this new order and had an obelisk erected to reason before the mob turned on him and took his head off.

Prayer is usually defined as a request or petition to God, though “prayers” for rain might be offered as just wishful hope.

The fundamental questions of humankind are where did we come from and what is our purpose. Observational reality began with the ancient Greeks, but the scientific method of exploration and problem solving accelerated after 1600 (AD). Science gives us a vision of the origin of the universe and life, but falls flat in attempting to explain the purpose of human life or if we even have a purpose. On the other hand, religion gives us explanations for both our origin and our purpose. Unfortunately, some say that because humans can’t directly measure God, he doesn’t exist.

Even though God can’t be scientifically measured, we have glimpses of a bigger reality in the beauty of a sunset and in concepts like love. We even sense the sacred in the changed nature of a man. You can certainly see the absence of God in the savagery of National Socialism (Nazi) or ISIS’ perverted notion of God. Prayer is a medium through which we move toward and hopefully encounter that bigger reality which gives life meaning. And having to answer to God and conscience makes us more human than even our ability to reason.

Dr. Andrew Newberg is an internist and researcher in the new field of neurotheology which interfaces traditional science and theology. He has authored many scientific papers and books including “How God Changes Your Brain.” His observations come from studying brain scans of people who have achieved some degree of “enlightenment” through prayer and exercising religious practices. He has scanned Sufi mystics, Pentecostals speaking in tongue, Buddhist mediators, Franciscan nuns and even people engaging in “secular spirituality rituals.”

Surveys show that 55% of Americans pray daily and three fourths of us pray at least weekly. Newberg believes your brain stays healthier by exercising it like a muscle. 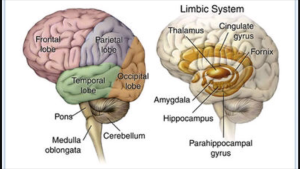 The picture above demonstrates the major areas of the brain affected by prayer. The frontal lobe lies behind our foreheads. Humans have prominent frontal lobes which enable us to reason and plan our lives. This area withers in Alzheimer’s Disease. Newberg has shown that just twelve minutes of prayer every day may slow ageing of the frontal lobe. The anterior cingulate area lies deep in the brain and is likewise activated when we feel compassion or empathy through prayer.

The parietal lobe lies above and behind our ears and affords us an awareness of our body. Interestingly, this area is deactivated during religious activities, especially in states where we achieve “oneness” with God or the universe.

The limbic system also lies deep in the brain and is the oldest area of the brain by evolutionary standards. This area is activated during anger and negative emotions. The amygdala is a part of the limbic system and is activated in fight-or flight responses. Perhaps as a survival mechanism the fight-or-flight “deactivates compassion.”

Newberg maintains that prayer “enhances our emotional well being” and promotes a beneficial lowering of blood pressure. Prayer moves us out of focusing on ourselves and refocuses us on others and God. Prayer is a natural activity for humans, and when we avoid this searching, empathizing and healthful meditative process it is to our detriment.

Last week I observed that children can teach us a lot. Many afternoons I pick up my grandson Oakley at pre-school. It warms my heart when he looks up and recognizes me with a big smile and runs to stand next to me. Oakley then turns to wave goodbye to his teacher and friends because he knows I’ve “got his back.” As I bend down to wrap Oakley in my arms of love and protection, I can similarly envision God reaching down to encircle me in his arms of love and grace when I pray. Thanks for the lesson, Mr. Oakes!