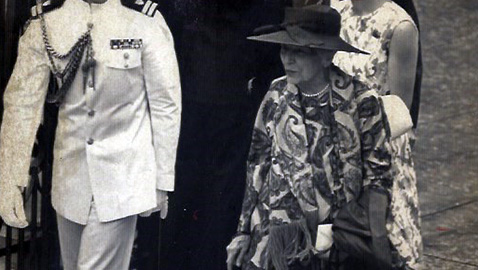 “If you haven’t got anything nice to say about anyone, come sit here by me” – pillow in the home of Alice Roosevelt Longworth.

Alice Roosevelt Longworth, eldest child of former President Theodore Roosevelt, had been in the public eye since the assassination of William McKinley in 1901.  Banned from the White House during the administration of Theodore Roosevelt’s chosen successor, William Howard Taft, due to her public comments about First Lady Helen Taft, Alice found herself in the same position during Woodrow Wilson’s reign as president.  Theodore Roosevelt had a particular dislike for Wilson and when the President refused to allow him to raise a division and fight in France during the First World War, TR’s dislike boiled to a red-hot hatred.  Roosevelt campaigned hard for Republican candidates in 1918 and President Wilson made a crucial mistake in telling the American people the election of a GOP Congress would be a repudiation of him and his administration.  Nobody was more gleeful than Theodore Roosevelt when the Republicans won a majority in Congress that year.  Alice Roosevelt Longworth regularly attended committee meetings, sessions of both the House and Senate, and threw intimate dinners where she lobbied against American entry into the League of Nations.  Dinner at the home of Alice Longworth was a prized invitation and the food was excellent, although apparently she had the same menu for each dinner.  The dinners began with a cream of crab soup that guests never forgot decades later.  Salad, vegetables, some kind of potato, all followed by a cream Brule that made the same kind of impression as did the cream of crab soup.  Virtually everyone who knew Alice Roosevelt Longworth personally attested to the fact she was one of the most stimulating and erudite conversationalists he or she had ever met.

Therein lay much of the dominion Mrs. Longworth exercised over Washington’s elite society.  Conversely, Alice was extraordinarily shy before people she did not know.  Her one-time friend, Cissy Patterson, publisher of the Washington Herald, as well as an old rival for the affections of both Nick Longworth and Bill Borah, once chided her enemy in her newspaper as being unable to utter in public.

Mrs. Longworth’s husband, Nicholas, was a Republican congressman from Ohio, moving up the ladder inside the U. S. House of Representatives.  A convivial man with a love of music, women, and liquor, Nick Longworth was enormously popular with his fellow congressmen, Democrats and Republicans alike.  Longworth was especially good friends with his counterpart on the Democratic side of the aisle, John Nance Garner of Texas.  Garner certainly enjoyed taking a drink himself and instituted what he referred to as the “Board of Education” in a Capitol hideaway office where he poured drinks for a favored few each day.  The Longworth marriage was not what it once had been and while Nick and Alice loved each other, the congressman continued drinking and kept mistresses, a fact known to Alice.  For her part, Alice did not seem as upset about her husband’s lady friends than she did his drinking.  Alice Roosevelt Longworth never tolerated drunks and her husband overindulged on numerous occasions.  As to affairs, Alice had embarked on her own with Senator William E. Borah of Idaho.  Bill Borah was an impressive man, a constitutional expert, a highly regarded lawyer, and a brilliant orator, one of the few members of the Senate thought to be able to change the votes of his colleagues with one of his powerful speeches.  Borah was an isolationist and profoundly opposed to American participation in the League of Nations.  Along with California senator Hiram W. Johnson, Borah had trailed Woodrow Wilson across the county during the President’s ill-fated speaking tour to change the minds of the American people and pressure the U. S. Senate into ratifying the Treaty of Versailles.  Wilson suffered a serious stroke on his speaking tour which left him highly disabled, a fact that was successfully kept from the public by his physician and First Lady Edith Bolling Wilson.  Alice dismissed Wilson as a “whey-blooded schoolmaster.”

Like Senator Borah, Alice Roosevelt Longworth was deeply opposed to the United States joining the League of Nations.  She used her social prominence and dinner parties to further opposition to the Treaty of Versailles.  Alice also became pregnant at age forty.  No one knows if Nick Longworth knew about his wife’s affair with Senator Borah; nor does anyone know if he knew that the daughter Alice bore was that of Bill Borah.  Nick seemed not to suspect as he positively doted on the daughter Alice named Paulina.  Certainly Alice’s affair with the senator was hardly news to many denizens of Washington.  Some wags referred to Alice as “Aurora Borah Alice” while others snickered she should name her daughter “De-Borah.”  Yet Mrs. Longworth was one of those rare and exceptional people who simply did not give a continental what others thought of her and while Paulina’s true paternity was suspected by many, Nick Longworth either did not know or did not care.

For the remainder of his life, Nicholas Longworth took his daughter with him everywhere he could, as often as he could.  Paulina could be found playing with the typewriters in his office, especially after he became Speaker of the House in 1925.  Paulina was deprived of her beloved father when the ailing Speaker had gone to the home of friends in South Carolina where he eventually died of pneumonia in 1931.  While Nicholas Longworth had been wealthy, evidently he did not leave Alice set for life.  Mrs. Longworth wrote an autobiography, “Crowded Hours”, that sold well and was encouraged to write a newspaper column like that of her cousin Eleanor, who was then First Lady.  To augment her income, Alice cheerfully appeared in paid advertisements for cigarettes (which she loved), as well as Pond’s cold cream.

Eleanor was an inviting target for Alice’s malevolent wit and the First Lady had heard about her cousin’s impersonation of her.  Eleanor Roosevelt asked Alice to perform the impersonation, which included Alice protruding her front teeth.  Alice gave Eleanor a demonstration of the impersonation, which had been seen many times by much of Washington’s society, and while the First Lady managed a little laugh, it was utterly devastating.  Eleanor readily granted Alice’s intelligence but observed her cousin’s life appeared “to be one long pursuit of pleasure and excitement and rather little real happiness.”  Alice’s tart tongue usually found its target and she sniffed Franklin Roosevelt was “one-thirds mush and two-thirds Eleanor.”

Eleanor did have the satisfaction of knowing her newspaper column, which expanded to radio, was much more popular and widely read than Alice’s; the problem with Mrs. Longworth’s column was it exhibited none of her vibrant personality and mordant wit.  Eventually, Alice discontinued her column while Eleanor’s lasted until her death.  Still, Alice continued to be invited to the White House by Eleanor until Franklin Roosevelt could stand it no longer.  Alice, being a Republican, heartily denounced FDR and the New Deal lustily every four years.  Still, Alice did not spare some of those in her own party and was credited with the statement that haunted Wendell Willkie, the 1940 GOP presidential nominee, throughout his campaign.  When an acquaintance marveled at Willkie’s surprise win at the Republican National Convention in Philadelphia and speculated his candidacy had been boosted by the “grassroots”, Alice retorted, “Yes, the grassroots of 10,000 country clubs.”  It was Alice Longworth who said of Calvin Coolidge, “He looks as if he’s been weaned on a pickle.”  Alice’s opinion of Warren G. Harding was even lower, saying the president was “just a slob.”

Thomas E. Dewey, the 1944 Republican presidential nominee was the victim of another supposed Alice Longworth bon mot.  Allegedly, Alice was thought to have said Dewey “looks like the little man on the wedding cake.”  For the rest of her life, Alice Longworth denied she had ever said any such thing.  According to one of Mrs. Longworth’s biographers, two women who thought it would be clever went around Washington, D. C. quoting the remark and crediting Alice.  The fact it spread so far and quickly is tribute to Alice’s usual wit.

When Republican senator Joe McCarthy encountered Alice, he met his match.  Putting his arm around her, something she genuinely disliked, he tried to make a joke, saying he considered Mrs. Longworth his date and would therefore call her “Alice.”  Mrs. Longworth snapped, “No, Senator McCarthy, you are not going to call me Alice.  The truckman, the trash man and the policemen may call me Alice, but you may not.”

Alice Roosevelt Longworth remained an isolationist, serving on the Board of America First, until the United States entered World War II with the bombing of Pearl Harbor.  With the death of Franklin Roosevelt and the presidency of Harry Truman, Alice’s company was still much sought after and invitations to her home still highly prized, but Eleanor’s comment about happiness seemed prescient as Paulina descended into depression.  Paulina had married well, but her husband, Alexander Strum, while remarkably talented and intelligent, had a very serious drinking problem.  Strum died at age twenty-eight from viral hepatitis after having produced a daughter, Joanna, with Paulina.  Five years after Alex Strum’s death in 1951, Paulina Longworth Strum died from a combination of sleeping pills and alcohol.  Alice was faced with raising her ten year-old granddaughter.  Whatever failings she had as a mother, Alice made up for as a grandmother.  Joanna remained the person whose company Alice craved the most until the end of her life.  Fortunately, Joanna proved to be as happy an adult as her mother had been unhappy.  The year before Paulina’s death, Alice Longworth had suffered a fall and broken her hip; a year later she was diagnosed with breast cancer and underwent a mastectomy.  In 1970, cancer was found in her other breast and once again she had a mastectomy.  Alice referred to herself as “Washington’s only topless octogenarian.”

Alice Longworth, or “Mrs. L” as she was popularly known by those who knew her, remained a fixture of Washington society and was preeminent amongst the Capitol’s “cave dwellers.”  Alice had long liked Richard Nixon and supported him in his 1960 campaign against John F. Kennedy, but even she was not immune to the Kennedy charm.  While Alice was sorry Nixon lost the election, she admitted until she met the Kennedy clan she did not realize “how amusing and attractive Democrats could be.”  Despite her affection for the Kennedy family, Alice Roosevelt Longworth was one of the very few people knowledgeable about politics who did not believe Richard Nixon’s career was over, even after losing the 1962 gubernatorial race in California.  Alice also abandoned her own political party briefly when she voted for Lyndon Johnson over Barry Goldwater in 1964.  Yet Alice scalded LBJ when he complained about her habit of wearing broad brimmed hats, saying it prevented him from kissing her.  “That, Mr. Johnson, is why I wear them,” Alice replied.

Well into her eighties, Alice explained, “The secret to eternal youth is arrested development.”

Alice was well able to turn her humor on herself and as she aged, she joked she was a “withered Twiggy”, a reference to the popular and extremely thin British model.  Yet even well into her eighties, her temper was capable of flashing.  When her black chauffeur, Richard Turner, was driving her in her ancient limousine and pulled out in front of a taxi driver who bellowed, “What do you think you’re doing, you black bastard?”  It was Alice who replied, snarling, “He’s taking me to my destination, you white son-of-a-bitch!”

Alice Roosevelt Longworth delighted in attending social events in Richard Nixon’s White House and made her final visit to what had once been her home in 1976 during Gerald Ford’s presidency for a bicentennial dinner attended by Queen Elizabeth of Great Britain.