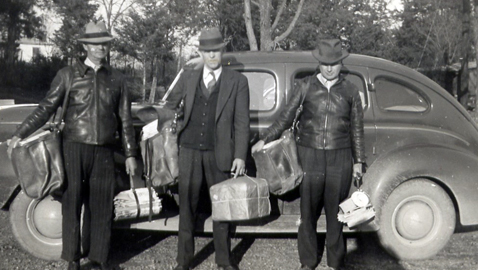 The timeline of events as told by the late Woodrow Luttrell is packed full of history.  Words that were  meant to communicate with his family’s younger generations are being shared with Focus readers, giving a rare glimpse of life during the early 1900s.

Woodrow Luttrell was born in 1916 in a small, two-story house about 200 feet from the railroad tracks and about 1/8 mile from the center of Corryton where the post office was located.  During

World War I and the decade before the 1920s, his Dad carried the mail by horseback from the Corryton Post Office.  He used their horses, Molly and Prince, on alternate days.

In 1918, when Woodrow was about age two, the family moved to a house on the Chiles farm near the foot of House Mountain about two miles from Corryton.  It was alongside and close by Little Flat Creek on Childs (spelled differently) Road.

In 1920, they moved again.  This move was to Luttrell House which his parents bought along with a 30-acre farm.  Woodrow was four years old.  “Along about that time Dad bought a new rubber-tired top buggy, with side curtains,” Woodrow wrote.  “It also had a big front curtain with what was called Ison (or Izon) Glass, a plastic material window to see through.  There was also a slot in the front curtain that the horse lines could be run through.  The buggy was used for carrying the mail.  Molly and Prince were the buggy horses.  On cold days, Dad burned a kerosene lantern for heat,” he added. The 1920s brought change for the family.  “By about 1922, Dad bought his first Model-T Ford at Rutledge.  It was a two-seated Touring Car with a top and removable side curtains,” Woodrow recalled.

“Fairly soon all roads on Dad’s route were good enough for driving a Model T Ford, except the last four miles of his route from where Roberts Road crosses Washington Pike.  During bad weather, Mom would harness one of the horses, hitch it to the buggy, and drive there to meet Dad for him to use on the remainder of the route.  She would drive the Model T Ford home,” he continued.

While the automobile was used for mail delivery, Woodrow recalled other uses.  “Of course, that Model T Ford made many trips back and forth to our grandparents’ home and farm.  It was also used extensively for all other travels,” Luttrell wrote.  “One Sunday each summer, Dad and Mom would travel to the Smoky Mountains to take the family on an all-day picnic trip of fried chicken, biscuits, lemonade, and lots of other goodies; and we would do some sightseeing and wade a little in the cold mountain streams,” he added.

It was important for Luttrell to pass down his childhood memories.  It is just as important that we learn what life was like for those who came before us.  (To be continued)