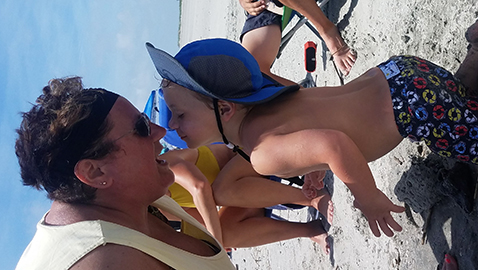 With the 2018 high school football season just around the corner, a lot of teams are finishing off-season workouts before the TSSAA’s dead period.

A lot of work and preparation is going on behind the scenes, too.

Most of my dealings with Tracy have had to do with her duties in Athletics. In a phone call and brief chat with her last week, I found out she and her family already has been on vacation.

“We usually take a vacation right when school ends,” pointed out Tracy. “It gets crazy this time of the year.

“There are a lot of things going on. New coaching hires. Getting information out on the KOC Kick-Off Classic. In July, we’ll have meetings with middle schools and the high schools’ athletic directors.”

Miller-Davis works closely with Marion Quinn, part-time Athletics Specialist for KCS. Their offices are located on the 12th Floor of the Andrew Johnson Building.

Miller-Davis has worked 12 years for Knox County Schools and eight years in her current position.

“As for me being an assistant in the office, I like to think I can at least be helpful in providing any necessary information coaches or athletic directors may need.

“I think people underestimate the time and responsibilities our athletic directors and coaches put in and have.”

“I try to keep them up to date in these areas,” she said.

Miller-Davis sees her position as a “connection” that ADs and coaches can contact and “we can get back to them as soon as possible.”

Organizing the KOC Kick-Off Classic is No. 1 on her list right now. That event is returning to Neyland Stadium for the first time since 2013. It will be held on Friday night, Aug. 10, starting at 6 with the first of eight quarters of play.

A luncheon for high school football coaches and ADs will be held in the Ray Mears Room at UT July 20 and that too is on Miller-Davis’ current list.

Now, more on that well-deserved vacation.

Tracy and the gang went to Wild Dunes Resort on Isle of Palms, S.C., which is near historic Charleston.

“We always stay at Wild Dunes location,” said Tracy. “We just love it.”

Joining Tracy and husband Greg were their two sons, Dustin and Tyler, daughters-in-law Haley and Ashton, and 3-year-old grandson Creed. The party also included Tracy’s sister and family and an aunt and uncle.

“Creed calls me MiMi,” added Tracy. “And he has brought so much happiness to my life for sure (especially after losing my mom (Dianna) suddenly last January).

Tracy’s father, Ace Miller, headed up the Golden Gloves’ boxing program in Knoxville for years prior to his death in March of 2012.

Miller-Davis took over as general manager of Ace Miller Golden Gloves and also is a Golden Gloves’ national board member and the franchise holder for Knoxville.

With her family’s history, it’s really no surprise she stays busy in athletics.