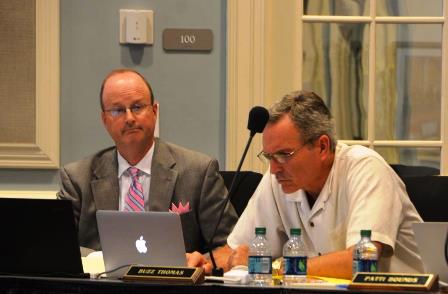 Thomas gave his first official Superintendent’s report, announcing that the big goal, established four years ago in a joint meeting with County Commission to create the “best school system in the South,” had not changed, but that “You may be even farther along in that task than you thought you were.”

Thomas said, “We learned a few weeks ago that we had surpassed Charlotte-Mecklenberg, which some consider to be the best large school system in the South, in academic performance, including ACT scores, reading and math scores, and graduation rates, and our County Commission will be especially pleased to learn that we are doing it for less money than in Charlotte-Mecklenberg.”

He added, “We also learned that Austin, Texas is ahead of us and we aim to catch them.”

The main topic on the Board’s work session meeting agenda, however, was a discussion of seating arrangements for Board of Education meetings, at the request of Thomas.

“I just wanted to give the Board a heads up on seating arrangements for your regular Board meeting that is scheduled for tomorrow night,” Thomas said, explaining, “I’ll be moving our staff off the Dias at the regular Board meetings – we’re not the Board of Education, we’re the staff, we work for you, the Board, and I think it’s important symbolically for us to do that, and I think it’s good for the community to see who the Board of Education is and not be confused about all those folks up there on stage.”

He added, “I am not so presumptuous to rearrange the work space in your workroom without your all’s input and consulting, so I’m not asking for a decision tonight, but I wanted to let you know that we were going to pull our staff off the Dias tomorrow night and let’s see how we like that arrangement. We’ll be seated on the front rows, and at some point we may want to make some changes to the seating arrangements for our staff here as well.”

He again reiterated, “I am trying to change where our staff sits at your regular Board meetings to, I think, better communicate both to our folks and to the community, who works for whom.”

Tracie Sanger asked, “Are you including yourself in that?” to which Thomas immediately replied, “I am! I am, unless you instruct me otherwise… but If you all feel like I need to be at the table with you I’ll be happy to do whatever you want. I didn’t want my staff to feel like I was moving them off and not going with them.”

Sanger said she was fine with moving the staff off, but in comparing Commission meeting to BOE meetings, the difference is that the Board employs the superintendent, whereas the mayor is elected.

Doug Harris asked for clarification on Terri Coatney (BOE Executive Assitant). Thomas said he would keep her on the Dias because she serves the Board, and added he would say the same thing about the Law Director. He said “I’m not trying to tell the Law Director where to sit – I’m trying to create a culture in our staff that clearly understands the difference between the Board of Education and our folks.”

Other Board members agreed with the suggested changes, including keeping the Superintendent, Executive Assistant, and Law Director on the Dias. Patti Bounds and Amber Rountree specifically commended Thomas on his leadership and foresight.

The rest of the meeting was spent discussing the agenda items for the July 6 regular session meeting. Considerable time was spent, in both the work and regular meetings, discussing the first reading of Knox County BOE Policy J-260 “Dress Code.”

Many in the community may not realize that KCS has a dress code, but you can find it on the KCS website. The suggested revisions were rather minor: removing the words “spandex” and “offensive,” giving principals options besides using in-school suspension for first offenses. The discussion, which took nearly 10 minutes in the work session and again in the regular session, revolved around how to revise the policy.

Rejecting the initial suggestion of the term “leggings,” the Board ultimately decided to delete reference to “spandex,” revising item 5 on page 1 and item 8 on page 2 to read, “Prohibited items include …skin-tight outer materials without appropriate coverage of the students’ posterior.” Lynn Fugate said in expaseration, “I never thought I would spend this much time on this.” It will come up again next month, for second reading.

Another policy that received a fair amount of discussion was Policy B-165, “Minutes,” after Sanger suggested that similar to Commission, she would be OK with minutes only being kept for the voting (regular) meetings, and not for the work session or mid-month meetings. She questioned the need for detailed minutes in the workshop sessions, especially since all the meetings are videotaped.

Carson disagreed, saying, “I personally believe anytime you meet you should have minutes, because the minutes are also a record of who attended, who participated, and those kind of things.” She added that abbreviated minutes “are fine, as long as we have video archives.”

Fugate concurred, for the reasons Carson stated, but also, “in the interest of transparency – everyone may not have access to video, or some people may want to print them out…Our discussion is probably the most important thing that citizens need to hear, not just our votes, because in our voting meetings we rarely discuss. The informed decision making that we do happens at our workshops.”

Other Board members agreed, but suggested the minutes could be streamlined in more summary or bullet form. Sanger withdrew her comment.