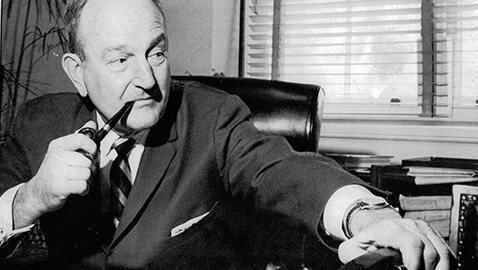 I imagine few, if any, readers remember George Grider of Memphis.  Grider served one term in Congress from Shelby County, yet he deserves to be remembered due to the fact he defeated the last vestige of the old Crump machine to get to Congress.  Clifford Davis had been hand-picked by E. H. Crump in a 1940 special election to replace Walter Chandler, who the Memphis Boss had brought home to serve as mayor of the Bluff City.  Davis had been quite popular in Shelby County and had won election countywide, at least once, over the fierce opposition of the Crump machine.  James A. Farley, Franklin Roosevelt’s Postmaster General and Chairman of the Democratic National Committee, once said U.S. Senator Kenneth D. McKellar was apparently the only man who could get along with Ed Crump over any period of time.  Crump was pondering replacing Cliff Davis in Congress when the congressman was one of five members shot while on the House floor by Puerto Rican nationalists.  The shooting won Davis much sympathy, especially in his home district and few people missed photographs published in newspapers and magazines of the congressman being carried to a waiting ambulance.  Crump realized Cliff Davis was too popular to displace in 1954.  The Memphis Boss never did remove Clifford Davis from Congress, as Crump was removed first.  E. H. Crump died in October of 1954.

Davis was amongst those shocked by the showing of Republican Bob James who came with 1200 votes of beating the congressman in 1962.  For a district that had remained solidly Democratic, it was a profound shock to Tennessee Democrats and Shelby Countians.  George Grider, a local attorney who had been an opponent of the Crump machine, entered the Democratic primary in 1964 against Congressman Cliff Davis, who stubbornly insisted upon seeking yet another term.  Davis had been in Congress for twenty-four years and even without Crump, had proven to be popular inside his own district.  Cliff Davis had won every Democratic primary easily and had no reason to believe he could not win again.  Yet, like most long-time incumbents, there were some noticeable cracks in the foundation.  Davis was no longer as active as he once was; at sixty-six, he returned home less frequently, his constituent service evidently had slowed down and there were rumors about the congressman’s fondness for alcohol.

George Grider was a vigorous fifty-one when the primary campaign began.  A native of Memphis, Grider’s father John MacGavick Grider, had been an aviator during the First World War and had been killed in action.  George Grider won an appointment to the U. S. Naval Academy and received a commission in 1936.  Grider served initially as an ensign on the USS Mississippi.  Eventually, Grider was selected to attend the Navy’s Submarine Warfare School and was assigned to the USS Skipjack.  Grider was stationed in San Diego at the time of the Japanese attack on Pearl Harbor.  Grider’s service in the Navy ended in 1947 when he suffered a heart attack.  George Grider retired with the rank of Captain.  Grider later authored a book, War Fish, written with Lydel Sims, about his World War II experiences.

George Grider, after his Naval career, had to start anew and he enrolled as a student at the University of Virginia law school.  Graduating in 1950, Grider passed the Tennessee bar and began the practice of law in Memphis.

When George Grider entered the 1964 Democratic primary for Congress, he was not a political novice, having served on the Memphis Planning Commission.  Grider had also managed the successful mayoral campaign of Edmund Orgill, who only narrowly lost the Democratic nomination for governor in 1958.  Grider had also been elected to the Shelby County Quarterly Court, the forerunner of the County Commission.  Grider had won local notice as a member of the Quarterly Court when he led an investigation into election practices in Shelby County.  Grider had been highly critical of segregation and inequities at certain polling locations.  Grider announced his own candidacy for Congress before Clifford Davis, perhaps thinking the congressman would opt not to run if he realized he would have significant opposition inside the primary.  The announcement of Bob James that he would try again to be elected to Congress as a Republican meant whoever the Democratic nominee was, he would have a real fight in the general election.  The Democratic primary was complicated by the entry of Frank L. White, a forty year-old state senator, into the race.

Grider immediately was critical of Congressman Davis, saying Tennessee had not gotten its fair share of defense projects.  “A city like Atlanta or a region like California enjoys a boom based on their biggest industry—defense—while Memphis and the Mid-South have pitiful shares,” Grider said.  George Grider said the Mid-South region, as well as Memphis, had “the natural assets, location, people, power and transportation to make an effective contribution to this nation’s defense and to local economy.”

Congressman Cliff Davis waited to make his own formal announcement for reelection on June 6, 1964.  The veteran congressman “shrugged off charges of physical incapacitation and neglect of office” to say he was running yet again.  “I would say I’m too busy to get into mischief that some would say I have,” Davis retorted.  The congressman promised to withdraw from the race if it could be proven he was physically incapable of doing his job.  Davis pledged to continue his support of the Tennessee Valley Authority and President Lyndon Johnson’s anti-poverty program.

Lydel Sims, a newspaper columnist, who had co-authored War Fish with George Grider, was announced as the congressional candidate’s campaign manager for the 1964 race.  The Grider campaign took advantage of a remark made by an angry Congressman Clifford Davis, who was made livid by the support of Grider by most African-Americans inside the district.  “Negroes have turned against me because I voted against the Civil Rights Act this year,” Davis complained.  “It is my judgment this law was untimely and the events in Harlem prove it.”  The congressman was referring to riots in New York.  Grider snapped the congressman’s comment was “deplorable.”  “all responsible citizens are trying desperately to keep civil rights from becoming an issue in these ominous times,” Grider said.

State senator Frank White described himself as “conservative in principle and progressive in action” while saying George Grider was one who did things in a “typical loose liberal fashion.”  Grider largely ignored White, stressing his five point program of increased jobs and wages, medical care for the elderly, more funding for education, as well as ending waste in national defense programs and providing responsible leadership in Congress.  Grider supported Medicare “with proper controls.”  Both Grider and White hit Congressman Davis for his allegedly spotty attendance.  Grider also effectively chastised Congressman Davis for having voted to increase his salary from $25,000 per year to $30,000 annually.

Election Day brought victory to George W. Grider and ended the long political career of Congressman Cliff Davis.  Grider beat Davis by more than 8,000 votes, while Frank White ran a poor third, polling just under 10% of the ballots cast.  Grider had quite nearly won half of the votes cast in the Democratic primary.

George Grider campaigned on the traditional bread and butter issues favored by Tennessee Democrats, which went hand-in-hand with the theme of President Lyndon Johnson’s reelection campaign in 1964.  Still, Grider only narrowly defeated GOP candidate Bob James who had come close to defeating Congressman Clifford Davis two years earlier.  Grider beat James by less than 11,000 votes, winning 52.5% of the vote.  George Grider’s congressional campaign was likely helped immeasurably by that of Lyndon Johnson.  Both of Tennessee’s Senate seats were up in 1964 and Albert Gore and Ross Bass both won with roughly 53-54% of the vote.  GOP presidential nominee Barry Goldwater’s pledge to sell off the TVA had offended and frightened tens of thousands of Tennesseans.  Without the surge of support for the Democratic ticket, it is quite possible George W. Grider would have lost.  Yet, George Grider has reason to be optimistic; he had defeated not only an incumbent congressman to win the Democratic nomination, but he had also beaten a very strong Republican candidate by a margin nearly ten times that of 1962.

George Grider discovered there is considerable difference in running against an incumbent and being one; in 1966, Congressman Grider faced Republican businessman Dan Kuykendall in the general election.  Kuykendall had managed the congressional campaign of Bob James in 1962 when James had almost beaten Congressman Cliff Davis.  Dan Kuykendall had also been the GOP nominee for the U. S. Senate against incumbent Albert Gore in 1964 and had won an impressive 46% of the vote.  Highly articulate, Dan Kuykendall was a very credible congressional candidate.  Initially, things looked good for Congressman George W. Grider.  The incumbent won more than 42,000 votes inside the Democratic primary and was unopposed.  Kuykendall won just over 6,000 ballots, down from more than 16,000 in the presidential year of 1964 in Shelby County.

Things were changing, not only in Tennessee, but Shelby County as well.  Many former adherents of the old Crump machine had drifted into the Republican Party; for those who could not bear to give up their ties to the Democratic Party, they simply voted for GOP candidates in general elections.  Younger business people, the country club set, and many more conservative working class voters liked the messages espoused by candidates like Dan Kuykendall.  George Grider spoke the traditional language of liberals like Franklin Roosevelt and Harry Truman.  That was the same language spoken by Lyndon Johnson, but the Great Society and LBJ’s war on poverty were not proving to be popular with many voters, especially those in the middle class.  Howard Baker was once again running for the United States Senate.  Senator Ross Bass had lost the Democratic primary to Governor Frank Clement, whom Bass had beaten for the nomination by 100,000 votes two years earlier.  The results of the 1966 Democratic senatorial primary were shocking, especially when compared to the results in 1964.  Ross Bass had easily carried all four of Tennessee’s big urban counties; in 1966 Frank Clement carried Davidson, Shelby and Hamilton counties, while Bass carried only Knox County, albeit narrowly.  Clement won the Democratic nomination by just over 18,000.  To the end of his life, Ross Bass would insist his defeat in the Democratic primary was due to Republicans crossing over to vote for Clement.

Dan Kuykendall would be the only Republican elected to represent Shelby County in Congress, serving for a total of eight years before losing in 1974 to Harold Ford.  Kuykendall’s victory in 1966 effectively ended George W. Grider’s electoral career.  Joe Hatcher, political columnist for the Nashville Tennessean, attributed Grider’s loss in 1966 to voter backlash and wrote readers shouldn’t “be surprised if Grider regains that seat in 1968.”  Yet George W. Grider did not run for Congress once again in 1968.

Instead, Grider accepted a job as general counsel and vice president of the Carborundum Corporation of Niagara Falls, New York in 1967.  George Grider left New York in 1975 when he returned home to Memphis and resumed the practice of law at age sixty-three.

George W. Grider was little more than a footnote when he died on March 20, 1991, yet he deserved far more.  Grider was a member of what author David Halberstam called America’s “Greatest Generation” and lived a full and productive life.  Indeed, George Grider remade himself and reconstituted his life more than once, a remarkable achievement for any human being.