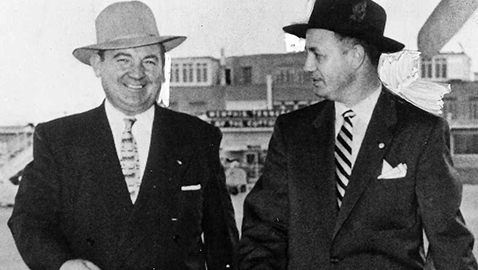 Genuine war hero, sheriff, accused counterfeiter, convict and U. S. congressman from Tennessee, Pat Sutton was, if anything, a colorful character.  It may be difficult for some readers to imagine today, but the entire country had been unified in winning World War II.  White, black and brown; men and women; even Republicans and Democrats were focused upon winning the war and destroying the forces of fascism led by Adolf Hitler and Benito Mussolini, as well as the imperialist expansionism of the Japanese Empire.  Like so many others of “America’s greatest generation”, Pat Sutton went off to war and came home.  Like many other veterans, he ran for office.  Pat Sutton set his sights high; he ran against incumbent congressman Wirt Courtney who represented Tennessee’s Seventh District.  Courtney had won a special election in 1939 to fill the vacancy caused by the sudden death of Congressman Clarence W. Turner of a heart attack.  A former judge from Franklin, Tennessee, Wirt Courtney was an old-fashioned New Dealer.

The race between Congressman Wirt Courtney and Pat Sutton was nick and tuck from beginning to end.  On Election Day, Tennessee State Troopers were sent to Hohenwald due to threats of violence.  Some fifty spectators crowded a courtroom in the Lewis County courthouse to watch as “the canvass was being made.”  The Seventh Congressional District was comprised of thirteen counties, which ran from Cheatham and Montgomery, just above Nashville, which nestled the Kentucky border, to Wayne and Lawrence counties, which border Alabama.  Courtney carried seven of the thirteen counties while Sutton carried six counties in the final vote count and the end result was as close as could be; Pat Sutton nudged out Congressman Wirt Courtney by a mere fifty-eight votes inside the Democratic primary.  Both sides complained about voter fraud and election “irregularities.”  Pat Sutton possessed a flair for the dramatic and had petitioned U. S. Attorney General (and future Justice of the Supreme Court) Tom Clark to order the FBI to investigate the alleged irregularities in the voting inside the Seventh Congressional District.  Sutton complained his supporters were “forcibly” prevented from watching the ballots being tabulated and claimed some ballots had been destroyed and others “changed.”  Sutton insisted there had been dubious goings-on in at least three of the Seventh District’s twelve counties.  For his part, Congressman Wirt Courtney said he would welcome any investigation and would do whatever he could to assist the FBI or any other entity.  As Sutton was declared the victor, Congressman Courtney remained at his home in Franklin, but refused to concede until completing his own survey of the election returns.

When World War II had started, Pat Sutton volunteered and went off to fight in the Pacific theatre.  Sutton saw service with the Sixth Army in the Philippines and New Guinea.  When General Douglas MacArthur retook the Philippines, Pat Sutton was amongst the first wave of Americans landing on Leyte Island.  After five years in the military, Pat Sutton went home to Lawrence County, but readily admitted he had his eye on a seat in Congress the entire time.

Only thirty-three years old when he won election to Congress in 1948, Pat Sutton had waged what one newspaper labeled a “novel” campaign accusing Wirt Courtney of “absenteeism.”  Even Courtney’s detractors acknowledged he was an able congressman.  Both men were veterans; Courtney had fought in the First World War, while Sutton had fought in the Second World War.  Sutton had a pretty well funded campaign and spent at least $4,000 of his own money.  He had employed some stars of the Grand Ole Opry to entertain while he spoke to crowds throughout the district.  “Uncle Dave” Macon was perhaps the first star of the  Grand Ole Opry, a singer and banjo virtuoso who apparently always entertained in a batwing collar.  Interviewed by the Chattanooga Times, Sutton bragged, “I knew from the beginning I could win it.  What issue did I win it on?  Absenteeism.”  Pat Sutton explained he never used Congressman Courtney’s name during the campaign, always referring to “my opponent” and “the incumbent.”  “I cited the record showing that in the past four years he missed 37 per cent of the roll calls and 87 per cent of the quorum calls,” Sutton explained.  “In other words, he was absent an average of 62 per cent of the time when members are supposed to be present and answer the roll call.”  Courtney explained illness had kept him away upon occasion, but Sutton pointed to important votes missed by the congressman, including federal aid to education, the Hill-Burton hospital aid bill, the Fair Employment Practices Commission, and cancer research.  Sutton said he was a strong supporter of the Tennessee Valley Authority and veterans.  When asked about foreign policy, Sutton barked, “I am against any further appeasement of the Russians – – – I say tighten up on them.”  The Democratic nominee for Congress in Tennessee’s Seventh District added, “If it takes war to stop them (the Russians) we might as well have it.  I will leave my seat in Congress and put on the uniform again if there is a war.”

Once the election results were ratified, Congressman Courtney, a scholarly man and himself a soldier of considerable valor, issued a simple, yet eloquent statement thanking his friends for their support in his campaign for reelection.  Courtney thanked the people of the Seventh Congressional District for allowing him to serve them in Congress.  Wirt Courtney, fifty-eight years old when he was defeated in 1948, went back home to Franklin and resumed his law practice.

The 1948 election was the beginning of Pat Sutton’s political career and he proved to be an exceptionally ambitious young man.   Pat Sutton faced no Republican opponent in the general election and was assured of winning in the fall.  Still, the young candidate astutely continued his energetic canvass of the Seventh Congressional District.

Pat Sutton hurried to Washington, D. C. where he joined Dayton Phillips, the GOP congressman from the First District, and Senator Kenneth McKellar for a meeting with Paul Rudolph, the general manager of the Eastern Dark-Fired Tobacco Growers’ Association.  Naturally, tobacco was an especially important crop in Tennessee at the time.  Sutton hurried back to Tennessee where he was to join Congressman Estes Kefauver, who had defeated Senator Tom Stewart for the Democratic nomination for the U. S. Senate, to campaign in Clarksville with Hammond Fowler, the Democratic nominee for the Public Utilities Commission.  Kefauver and Sutton also campaigned together at the Lawrence County Fair.

Campaigning that fall, Pat Sutton told an audience the “Democratic party has always been against special privileges.  It is the part of the common map.”  Sutton then explained why he was a Democrat.  “I am a Democrat because I am a common man,” Sutton said.  “I have no opposition in this race, but any time there is an opponent against a Democrat I have an opponent.”

Tennessee had two new congressmen in 1949 and a new junior U. S. senator.  Pat Sutton was joined by James B. Frazier, Jr. as a new congressman.  Frazier, son of a former Tennessee governor and U. S. senator, had been the U. S. attorney for the Eastern District of Tennessee since 1933.  Frazier had been elected to succeed Estes Kefauver in the Third Congressional District.  Kefauver had been elected to the United States Senate by defeating former congressman B. Carroll Reece in the general election.  Sutton traveled to Knoxville to visit the TVA headquarters along with John Wilmot, a member of Great Britain’s Parliament and Charles TeWater, the Ambassador-At-Large from South Africa.  From Knoxville, the three dignitaries went to Chattanooga and Muscle Shoals, Alabama.

Once installed in office, Congressman Pat Sutton tried a novel approach in his office arrangements.  Freshmen congressman received two room offices in either the Cannon House Office Building or the Longworth Office Building.  The front office housed the congressman’s secretaries and assistants, while the back, inner office was reserved for the congressman.  Visitors to Sutton’s office walked through the front door and came face-to-face with the congressman.  Sutton decided to give the back office to his staff members, telling a reporter, “They are doing all the hard work and I don’t want visitors bothering them.”  Throughout his 1948 campaign for Congress, Sutton told audiences to write him in Washington and they would receive a courteous and prompt reply to their inquiries.  Shortly after the inauguration of President Harry S. Truman in 1949, Congressman Sutton informed a reporter he was receiving 150 letters daily, which was about three times as many letters as most Tennessee congressmen.  Sutton missed a dinner for Tennesseans in the nation’s Capitol, explaining he had gone down to Virginia to kill hogs.  “Just because I am in Washington doesn’t mean I’m not going to eat,” Sutton said.

Pat Sutton hired Todd Elrod as his administrative assistant.  Elrod had held the same position under Congressman J. Ridley Mitchell, who had served in Congress from Tennessee’s Fourth District from 1931-39.  Mitchell had run for the U. S. Senate in the 1938 special election and lost.  Mitchell made another attempt at a political comeback running for governor in 1942 and made a surprisingly strong showing against incumbent Prentice Cooper.  Ridley Mitchell had then accepted a position to work as an attorney in the U. S. Attorney General’s office, as did his former assistant, Todd Elrod.  Elrod had been a special assistant in the lands division of the Department of Justice, while Mitchell worked in the anti-trust division of the Justice Department.  Sutton, needing someone who knew and understood Washington, wisely hired Elrod away from the Department of Justice.  Sutton found himself a house in Alexandria, Virginia on Tennessee Avenue.

Sutton very much wanted a place on the House Agriculture Committee and constantly seeking publicity for his efforts, the freshman congressman naturally notified the news media of his desire.  Congressman Sutton claimed he had the support of “a number of his colleagues” for a spot on the Agriculture Committee.  No Tennessean had sat on the House Agriculture Committee since Harold Earthman, who had been defeated for renomination in 1946.  “My district embraces the largest dark-fired tobacco market in the world,” Sutton said, “and I’m hopeful I will be permitted to speak for the tobacco folks in the committee.”  Sutton had a powerful ally in Jere Cooper, a Tennessee congressman and the second ranking member of the House Ways & Means Committee, which made committee assignments.  The new congressman and his wife began enjoying Washington social life with a dinner held at the Shoreham Hotel by the Tennessee Society for the Tennessee Congressional delegation, led by Senator McKellar.  Finis Garrett, a former longtime member of Congress and judge of the United States Court of Appeals, served as the toastmaster for the evening.

Sutton’s desire to serve on the House Agriculture Committee was granted and Tennessee’s other freshman congressman, James B. Frazier, Jr., landed a spot on the Judiciary Committee.

Pat Sutton kept his name before the public and the people of his district throughout his first term in Congress.  Still, he faced opposition inside the Democratic primary in his 1950 campaign for reelection from Dave Alexander, a state representative from Franklin, Tennessee, which was also home to Sutton’s predecessor in Congress.  Alexander kicked off his campaign with a blast at the Brannan Plan, named for Secretary of Agriculture, Charles Brannan.  “I am against the Brannan plan,” Alexander thundered. “Congressman Sutton voted for it.  That is the issue between us and on it I am willing to stand or fall in this campaign.”  Alexander had been the House floor leader for Governor Gordon Browning during the 1949 session of the legislature.  Unfortunately for Dave Alexander, he fell on the issue of the Brannan plan.  Alexander lost every county in the Seventh Congressional District, save for one: Lewis.  Dave Alexander even narrowly lost his own Williamson County to Congressman Sutton.

Sutton’s victory and his natural ambition caused him to look to move up to the United States Senate.