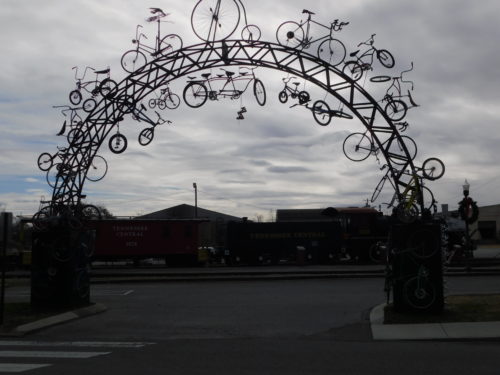 Cookeville is a popular stop for travelers headed west on I-40 with its many restaurants and hotels on the interstate as well as a lively downtown. If you are a fan of odd attractions, then Cookeville has more than a few for you to visit.

Seeing pink elephants is a common term for hallucinations while drunk but, if you’d like to see one without getting stinking drunk then Cookeville has one for you. The Pink Elephant fiberglass statue can be found near the Fairgrounds there off I-40, exit 286, on Tennessee Highway 135 and South Willow Street.

The elephant stands looking toward the highway and there’s parking before and after the odd attraction. The elephant wears glasses and is sometimes seen wearing a painted-on bikini. It stands sometimes on water skis.

Want to see Cookeville attractions even more unusual than a Pink Elephant?

Tennessee Tech University’s campus has a rather strange grave. Dammit the Dog, a beloved dog in the area, died in 1954 and received a hero’s funeral. Students buried him next to a fire hydrant. The grave is located on 9th Street near Derryberry Hall. The street is currently being repaved and hopes are the grave will be preserved. The tombstone is flat and flush with the grass.

Not odd enough for you?

How about an arch decorated with bicycles. Yep, there’s one of those on the west end of town at the corner of West Broad and North Oaks Street, next to Cookeville’s Depot Museum. It’s lit with color shifting LED lights at night and worth a day or night-time trip. You can park at the depot and walk back for a great photo.

The bicycle arch is called “Spokes” and was created in 2018 from an idea from biking enthusiast Brad Sells. It was a project of the Arts Around Tennessee, the City of Cookeville and the Tennessee Arts Commission.

The arch was obviously there before the various types of bikes were added but the entrance way takes on additional visual appeal with the bicycles.

While you are in Cookeville you might like to take a short ride to Cummins Falls State Park. The park, fairly new to the state system, is currently undergoing building construction at the parking area but has a bathroom building. There is a small ranger station there and the entrance to the path leading down to the falls passes through a metal shelter complete with warnings about the falls and the waters below.

Cummins Falls State Park is still being developed but worth a trip for the healthy walker. To get there, you can take Highway 290 north of Cookeville and follow the signs. You can also Google the park or find out much more about Cookeville and Putman County at https://visitcookevilletn.com/