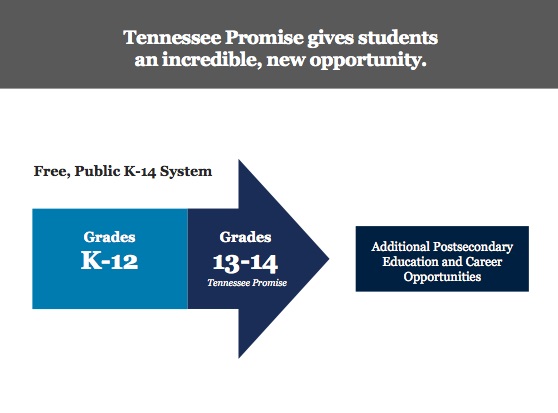 Even the Tennessee Department of Education is acknowledging that we are dumbing students down. They won’t say that outright. But when the Tennessee Commissioner of Education Candice McQueen visited Knoxville in March, and included the above slide in her presentation, it raised eyebrows among those who have been following the Common Core debate.

We do not mean to belittle the role of the Community College, or the high school graduates who will now have the opportunity to attend college. But when the DOE creates a program offering FREE tuition at a community college for any high school graduate, and then refers to it as “Grades 13-14,” one has to wonder.

Could it be that under our new “more rigorous” Common Core standards, high school graduates simply are not prepared for admission to a four year college or university? After all, Jason Zimba, one of the “architects” of Common Core admitted that the standards are designed only to prepare a student for admission into a non-selective two-year community college. Parents, are you paying attention?

The education reformers (and our own KCS administration) have bombarded us with the constant message that Common Core standards are “more rigorous,” and will prepare our students to be “college and career ready.” But the reality is quite different.

We need only look to California. Dr. James Milgram, Professor Emeritus at Stanford University, was on the Common Core validation committee for the math standards. But he also has a long history of reviewing, and writing mathematics standards.

Prior to the adoption of Daro’s standards, California math outcomes were about mid-range among the states. By 1996, four years later, California had dropped to 49th in the country.  The State Board of Education requested that Milgram, and three colleagues from Stanford, create the new California mathematics standards, which they did. It took two weeks, and they were adopted in 1997-98.

For the next ten years, the CA standards were regarded as the best mathematics standards in the country. He said, “Students were showing real progress – across all ethnicities and SES levels – learning math at a level that was close to what is expected internationally.” Milgram helped other states revise their math standards, and by 2004-2005, was regarded as the country’s leading expert on mathematics standards.

The Common Core project came along in 2009. Milgram was invited to serve as a member of the validation committee for the new standards. He was surprised to learn that Phil Daro was one of three lead authors of the common core mathematics standards. The others were William McCallum and Jason Zimba, both of whom have PhDs in mathematics, but no experience with K-12 math standards.

“Consequently,” Milgram says, “the Common Core mathematics standards are very low level indeed – at least two full years behind international expectations by eighth grade.” “Moreover,” he adds, “The same curricula that we got rid of in 1998-2000 in California are now reappearing claiming to be entirely aligned with Common Core.”

Milgram discussed his concerns with McCallum and Zimba, but said, “it appeared their hands were tied.” He then discussed his concerns with the leaders of Achieve.  The result was the Common Core writing team was given permission to include a limited amount of Algebra II and Geometry in the standards. Milgram assumed that there would be a (non-compulsory) path to Calculus included. That was not the case.

Shortly afterward, the members of the validation team received notice they would no longer be permitted to “interfere” in the work or the writing group. They would only be permitted to sign a letter asserting that the standards were excellent, and benchmarked to the highest international expectations. Milgram and 4 others refused to sign the letter.

Because of his work in California, Milgram had access to a huge data set of nationally normed outcome data from 1999 – 2012. He wondered, “How long would it take for a student initially in the Daro 1992 program before it would have produced irreversible damage?” The data showed that if a student had been in that program for four or more years – if they had already entered K-12 by 1993 – statistically they never caught up to students not under those standards.

Those students who had been in the Daro program for only 1-2 years recovered pretty quickly. Those with three years took longer, but eventually recovered somewhat. Milgram says we pretty much know what’s going to happen under Common Core mathematics standards – “because the guiding ideas behind it are the exact guiding ideas behind the 1992 California standards.”

In addition to Milgram’s concern about Algebra and beyond, he says the approach to Geometry is almost identical to an approach that was tried and quickly abandoned in the old USSR. There are “outright errors in the standards” with sixth and seventh grade material on ratios, rates, proportions and percents; and the definition of vectors is entirely incorrect in the high school standards.

He concludes, “The standards have not been tested. They have simply been decreed to be the gift that will fix all this country’s problems in spite of the fact that the two authors that are competent in mathematics have no background in the creation, verification, or testing of standards, while the third author has never been successful in creating standards of any quality what so ever.”

But Tennessee is ready with free 13th and 14th grades! Excellence, or mediocrity, for every child?