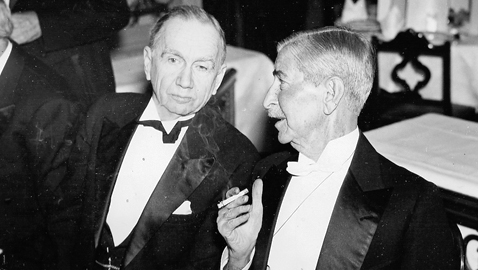 “When the water reaches the upper levels, follow the rats.”

Quote attributed to Claude A. Swanson

Claude Augustus Swanson was already something of a vestige of a time gone by as he approached the end of his life. Tall, stately, with a full head of hair and a bushy moustache, the immaculately dressed Swanson had occupied just about every public office available to a man of ambition. At various times, he served as a congressman, governor, United States senator, and Secretary of the Navy. Swanson was a clever and wily politician; for a time, he was the most powerful officeholder in Virginia.

Born March 31, 1862, the American Civil War was not even a year old when Claude A. Swanson entered the world. The future senator was born in Swansonville, Pittsylvania County, Virginia. Claude Swanson was one of seven children and unlike most of his political contemporaries, good fortune had smiled upon him, as his father was a prosperous tobacco merchant. Yet the Lady Fortune is quite fickle and Swanson’s family suffered when the tobacco market collapsed in 1876. Swanson, well educated, spent a couple of years teaching, but there, too, his fortunes dwindled. Virginia failed to make appropriations for schools and Claude Swanson used the opportunity to further his own education, attending a brand new state agricultural college. Eventually, Swanson joined his brother, John, working as a clerk in a grocery store.

Claude Swanson possessed considerable charm, even as a youth, and was industrious. While attending Randolph – Macon College, he won several oratorical contests, became editor of the student newspaper and was noticed by leaders of the Democratic Party in Richmond. Swanson’s talent for public speaking had caught the attention of others when he first made a speech while speaking before a Sunday School convention. Three prominent local businessmen were so impressed, they offered to finance his education. Swanson politely declined the offer, but did say he would gladly accept if they were to loan him the money to further his education. The businessmen were even more impressed and quickly agreed.

It was while attending Randolph – Macon that he also met Miss Elizabeth Lyons, who became his wife in 1894. Swanson went on to attend the University of Virginia, where he earned a law degree in 1884. Swanson quickly became a successful attorney and enjoyed a busy practice.

Swanson won his first election before wedding Elizabeth Deane Lyons; he was elected to Congress in 1892, representing Virginia’s Fifth District. Several counties inside his district had the unfortunate habit of voting Republican and he survived at least two election contests to remain in the House of Representatives. Congressman Swanson horrified some of the more conservative and staid members of his own Democratic Party when he loudly subscribed to William Jennings Bryan’s inflationary monetary policies. The Democratic Party at the time was nearly torn asunder by Bryan’s pro-silver advocacy and those Democrats who favored the gold standard, rallied around former president Grover Cleveland. Swanson’s position did not seem so outlandish following the depression of 1893 and several other Virginia congressmen were soon praising Bryan’s fiscal policies.

Many Virginians could no secure credit following the depression of 1893 and many of the more conservative Democrats also happened to be creditors. Many of those same Democrats were appalled by Congressman Claude Swanson and the Richmond Times thought him a socialist, if not a communist.

Swanson believed in direct election of United States senators (they were elected by state legislatures when he first went to Congress), championed the free delivery of mail to rural Americans and supported an income tax for the wealthy. When Congressman Swanson landed a spot on the powerful House Ways and Means Committee, many conservatives were not comforted.

Married, successful, and seemingly secure inside his Congressional district, Claude Swanson bought an estate that would remain his true home for the remainder of his life. Swanson bought “Eldon”, one mile east of Chatham, Virginia. Swanson renovated the home and under his ownership, it was both his home and a working farm that provided produce, meat, and additional income.

The key to Swanson’s electoral success was his personality and his devotion to doing all he could for his constituents. Swanson was a very friendly man, readily approachable and he genuinely liked and enjoyed people. Swanson also had the knack for forgiving enemies. Carter Glass, then a Congressman, waged a hard fought campaign against Swanson in 1910. It was an exceptionally bitter campaign and Senator Swanson gave Glass one of the rare defeats in his own long career. The two would later serve Virginia together in the United States Senate and Swanson extended the hand of friendship to Carter Glass and they became good friends.

One of Senator Glass’s own friends observed he was quite surprised by the change in Glass’s attitude toward Claude Swanson. Glass admitted he had become devoted to Swanson and asked, “How can you resist a man who always goes out of his way to be so friendly?”

Swanson also, realizing people liked to be remembered and called by name, was served quite well by his own memory. Senator Swanson became legendary for his ability to meet a person a single time and recall not only that person’s name, but details about that person.

Claude Swanson also employed humor, much of it at his own expense, to soften the reaction of critics. After being charged with being a “fence sitter”, Senator Swanson drawled, “I have never known but four men who could sit on a fence when a battle was raging, without being knocked off —Napoleon, Lee, Jackson, and Swanson.”

Swanson was also an excellent judge of both character and politics. When the Democratic National Convention seemed to be at an impasse in choosing between popular House Speaker Champ Clark and New Jersey Governor Woodrow Wilson as its nominee in 1912, Swanson astutely summarized the situation.

Swanson approached his senatorial colleague, Thomas Martin, the boss of Virginia politics and concluded Virginia was had “taken a fall on the political ice and if they lay still on the ice any longer they would catch political pneumonia.” Senator Martin looked at his colleague, who smiled and said, “Let’s get up in the morning and go skating with Wilson.”

Virginia’s support for Wilson helped to break the impasse and Woodrow Wilson was nominated for and elected president.

After winning election to the U. S. House of Representatives seven times, Swanson was elected governor in 1905. Swanson resigned from Congress on February 1, 1906 to take the oath of office as governor. Governor Swanson reformed Virginia’s state government and lessened the influence of the legislature, which had been quite influential under past administrations.

Claude A. Swanson was not eligible to succeed himself as governor and left office February 1, 1910, but death resuscitated his political career. Senator John W. Daniel, an old former Confederate, had been in failing health for sometime. Senator Daniel had suffered a stroke in 1909 but recovered. He had been reelected to a fifth term in the Senate in 1910, but had another stroke, which left him partially paralyzed. Retreating to a sanitarium for both treatment and to recover his health, Daniel died of a cerebral hemorrhage on June 29, 1910.

Swanson was quickly appointed to fill the vacancy on August 1, 1910 by his successor as governor, William Hodges Mann. Swanson would win reelection to the U. S. Senate four times and remained at the pinnacle of Virginia politics for decades. He easily turned back attempts to deny him reelection by other able politicians. Senator Swanson suffered a terrible personal loss in 1920 when his wife died. Three years later, he married his late wife’s sister, Lulie.

During his time in the United States Senate, Swanson became a passionate advocate for the Navy. Some jokingly called him “Big Navy Claude” Swanson. Swanson was one of the more senior Democrats in the Senate, but much of his time in the Senate was while the Republicans were in power. The exception was 1913 – 21 when Woodrow Wilson was president. Swanson was a strong supporter of President Wilson and a partisan Democrat.

By the time it appeared the Democrats were about to return to power, his own power was facing a determined challenge from former governor Harry F. Byrd. It would be a tough contest and Senator Swanson was beginning to ail. Swanson tried to maneuver Byrd out of the Senate race by seeking an appointment for the former governor to Franklin Roosevelt’s Cabinet. Roosevelt offered Virginia’s other senator, Carter Glass, the Treasury Department, which he had headed under the administration of the late Woodrow Wilson. Glass, dubious about FDR and his program, preferred remaining in the Senate. Finally, it was Claude A. Swanson who was offered a job in Roosevelt’s Cabinet. FDR selected Swanson to serve as Secretary of the Navy and the Virginia senator accepted, making way for Harry Byrd to come to the United States Senate.

Swanson refused to resign his Senate seat early so Byrd could acquire seniority, holding his office until the very last moment before being sworn in as Secretary of the Navy.

President Roosevelt had been an Assistant Secretary of the Navy under President Wilson and loved all things naval. Swanson was a good pick to serve as Secretary of the Navy; he was well-liked on Capitol Hill and was uniquely positioned to petition for greater funding for the Navy, a position he had long advocated while serving in the Senate.

By 1936, most every shipyard in the country was preoccupied with building ships for the Navy. Swanson gloated when he helped to shepherd through Congress the largest peacetime appropriation ever given the Department of the Navy in history. When Claude Swanson first became Secretary of the Navy, the U. S. Navy was comprised of 155 ships. By the time of his death in 1939, there were 272 ships either on the seas and oceans or under construction. One such ship was the U.S.S. Swanson, named for the Secretary of the Navy and christened by his wife, Lulie on November 2, 1940. The U. S. S. Swanson rests at the Battleship Cove Naval Museum in Fall River, Massachusetts.

Even so, there were those in the Roosevelt administration who questioned Swanson’s effectiveness and he was certainly in a serious physical decline. One New Dealer demanded to know why Roosevelt kept Swanson in office and the president replied the Virginian “depended on his salary” to live and FDR confessed he just “didn’t have the heart” to fire the elderly gentleman.

FDR fudged the facts a bit, as Swanson, while not wealthy, was well-fixed and comfortable. Swanson’s health continued to fail and he died on July 7, 1939.

While he had no children, Claude Swanson’s second wife, Lulie, did have a son from her own previous marriage. In 1955, Douglas Deane Hall made an address at the opening of the Claude Swanson Junior High School in Arlington, Virginia. Mr. Hall recounted Swanson’s long career —forty-six years in high office—for his audience.

Hall related that Claude Swanson had told him of all the offices he had occupied, he most enjoyed being governor of Virginia. Swanson is still rated as one of the best governor’s in Virginia’s history. When Claude Swanson left office as governor, the Carnegie Foundation released a statement saying, “Probably no educational development in any state in the Union is more marked than that which is represented in the Old Commonwealth of Virginia.”

Professor Henry C. Ferrell has written an outstanding biography on Claude A. Swanson, likely the definitive work on Swanson’s life and career. It is an excellent book.