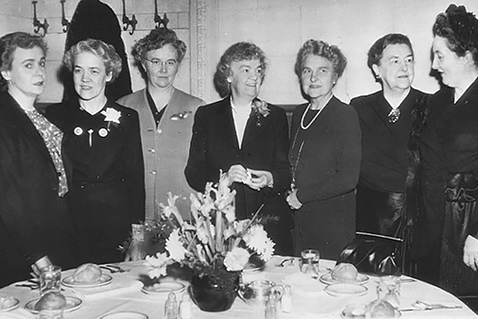 Like anyone fascinated with history, I always take special note of “firsts”; for instance the first person ever to be popularly elected to the United States Senate from Tennessee was also our longest-serving senator, Kenneth D. McKellar.  Georgia Lee Lusk is also a “first,” being the first woman ever elected to Congress from the State of New Mexico.  Admitted to the Union on January 6, 1912, politics in New Mexico was usually rough-and-tumble and tumultuous.  Practicing politics in the Land of Enchantment was never for the fainthearted.

The first United States senators from New Mexico were Albert B. Fall and Thomas B. Catron, both of whom were Republicans.  Fall was an especially adept politician, a rough-as-a-cob crusty rancher who was a tough partisan.  When President Woodrow Wilson was ailing and partially paralyzed (a fact largely unknown to the members of the U.S. Senate and the public) Fall was one of two senators to call at the White House to observe the president’s condition.  Fortunately, it was one of Wilson’s good days and the surprised Senator Fall told the president he had been praying for him.  Woodrow Wilson was still nimble-minded enough to inquire, “Which way, Senator?”—leaving Fall speechless.

Albert Fall achieved his greatest notoriety as the corrupt Secretary of the Interior under President Warren G. Harding.  Offices in New Mexico were hotly contested between the two political parties and the Republicans’ most popular officeholder was Senator Bronson M. Cutting, a progressive.  Cutting fought a bitter and close race for reelection in 1934 against then-Congressman Dennis Chavez.  Senator Cutting was the apparent winner of the race, but Chavez contested it.  Cutting was killed in a plane crash flying back to Washington to gather evidence for the hearing on the contest.  Cutting’s fellow progressive Republicans, including Idaho’s William E. Borah and Independent George W. Norris of Nebraska and FDR’s Secretary of the Interior Harold Ickes, blamed Dennis Chavez personally for the death of their friend.  Chavez was appointed to fill Cutting’s seat in the United States Senate, and he was shunned for years by those in official Washington who had esteemed Bronson Cutting.  Chavez, the winner of at least a couple of questionable elections, remained in the Senate until his own death in 1962.  The first person of Hispanic descent to be elected to the United States Senate was also from New Mexico; Octaviano Ambrosio Larrazolo had been elected in a 1928 special election for a short term.  Larrazolo was also a Republican and the champion of Hispanics in New Mexico.

By the decade of the 1930s, New Mexico had become a solidly Democratic state, although there remained a strong Republican presence.  Governor Clyde Tingley, an Anglo Democrat, was heavy-handed, insisting the political affiliation of those receiving relief from the federal government and New Deal programs in the Land of Enchantment be known to the state administration.  Tingley made no apologies for his partisanship in administering programs in New Mexico and flatly said his intention was to make the Democratic Party the majority in his state.

Georgia Lee Lusk was a native New Mexican, having been born in Carlsbad.  She attended college, which was not at all common for women at the time and graduated from the New Mexico State Teacher’s College (Western New Mexico University today) in 1914.  Georgia Lee Witt married Dolph Lusk, who was a successful banker and rancher, and continued to teach school in Eddy County.  The couple had two sons and Mrs. Lusk was pregnant in 1919 when her husband died.  After her husband’s sudden death, she added the responsibilities of managing the ranch to those of raising three small boys and teaching.

Women in New Mexico were energized by the candidacy of Adelina Otero-Warren, who was the first woman to be elected to New Mexico’s House of Representatives.  Mrs. Otero-Warren ran a hard race to be elected to Congress from the First Congressional District, which was ultimately unsuccessful.  The U.S. Mint announced last year Mrs. Otero-Warren will be one of the women whose image will adorn the reverse of quarters in the series of “American Women.”

While Adelina Otero-Warren was a Republican, Georgia Lee Lusk was a Democrat.  As Mrs. Otero-Warren was running for Congress, Georgia Lusk was running to become superintendent of Lea County Schools.  Unlike Mrs. Otero-Warren, Georgia Lee Lusk was successful and remained in office until 1929.  Mrs. Lusk had made an unsuccessful campaign for New Mexico’s popularly elected Superintendent of Public Instruction in 1928.  New Mexico’s state offices were elected every two years and Georgia Lusk tried again in 1930, which proved to be a better year for Democrats.  She won and was reelected in 1932.

Georgia Lusk was also the first woman ever to serve as a delegate to the 1928 Democratic National Convention, which nominated New York Governor Al Smith for president.

Georgia Lusk left office in 1935 when her term as Superintendent of Public Instruction expired and left politics for a time, concentrating on raising her children.  Mrs. Lusk could not leave her interest in education for long and served as a supervisor for rural schools in Guadalupe County for a year from 1941-1942.  In 1942, Mrs. Lusk was once again running a statewide campaign to be reelected to her old post as Superintendent of Public Instruction.  She won both the primary and general elections and was reelected in 1944.  During her third and fourth terms, Mrs. Lusk was quite successful in her determined bid to reform education in New Mexico.  Among her accomplishments was convincing a recalcitrant legislature to make some significant changes, including funding a program for school construction throughout the state.  Georgia Lusk also was successful in pushing the state to give students free textbooks in school, as well as increasing pay for teachers and providing a pension plan for educators.

New Mexico was electing its two congressmen at-large rather than from districts.  In 1946, Georgia Lee Lusk became a candidate for Congress in the Democratic primary.  One of the contestants seeking election to the House of Representatives that year was incumbent Congressman Antonio M. Fernandez who had first been elected in 1942 and would serve until his death in 1956.  The real contest in the 1946 Democratic primary was for New Mexico’s second seat in the U.S. House of Representatives.  The competition was fierce and included Lieutenant Governor James “Jawbone” Jones, Secretary of State Cecilia Tafoya Cleveland and Joe L. Martinez.  There were no fewer than eight candidates for two seats in the House.

Georgia Lusk pitched her campaign on the basis that she was a native-born resident of the Land of Enchantment and she was intimately acquainted with the issues confronting the people of New Mexico having been an educator all her life, as well as a rancher.  Lusk also stressed her interest in and support of veterans, who she recognized were coming back to New Mexico in large numbers after having fought in the Second World War.  Lusk had worked with numerous young men and women who were returning veterans and interested in continuing their education.

Fifty-three years old in 1946, Georgia Lee Lusk had a somewhat matronly appearance and resembled the stereotype of a school teacher at the time.  The crowded Democratic primary was settled with Congressman Fernandez running first with 25,091 votes.  Georgia Lee Lusk was second with 16,622; James B. “Jawbone” Jones was third, trailing Mrs. Lusk by just over 1,200 votes.

1946 was the best year Republicans had enjoyed since the onset of the Great Depression.  New Mexico saw Republicans fared reasonably well and the race for the United States Senate between Senator Dennis Chavez and Republican Pat Hurley was so close it necessitated a recount.  Georgia Lusk ran at the head of the Democratic ticket in the races for the House of Representatives.  Mrs. Lusk was the top vote-getter in the general election, winning 1,178 votes more than Congressman Antonio Fernandez.

Georgia Lee Lusk went to Washington, D.C., in January of 1947 to take the oath of office as one of seven women elected to serve as members of the U.S. House of Representatives.  For the first time since 1930, Republicans were in the majority in both the House and the Senate, meaning Georgia Lusk came to Congress as a freshman in the minority party.  Lusk won a coveted appointment to the Veterans’ Affairs Committee of the House of Representatives.  Throughout her two years in Congress, she was a supporter of the administration of President Harry Truman.  One can hardly be surprised Mrs. Lusk was a strong proponent for a national Department of Education.

In 1948, despite having demonstrated her personal popularity by running at the head of the Democratic ticket in the 1946 general election, Congresswoman Lusk encountered problems inside her primary in her bid for reelection.  The announcement of former governor John E. Miles likely doomed Congresswoman Lusk’s candidacy from the start.  Miles had been elected governor in 1938 and reelected two years later.  Miles had later become chairman of the New Mexico Public Service Commission and had been elected Commissioner of Public Lands, which is a statewide post in the Land of Enchantment.  Miles was well-liked and popular with the electorate.  To that point in his career, John Miles had never lost a statewide election.  Many of Georgia Lusk’s enemies inside New Mexico’s Democratic Party believed the former governor was popular enough to deny her renomination in the primary.  That surmise proved to be correct with John Miles running first, followed by Congressman Antonio Fernandez running more than 2,000 votes behind the former governor in the primary election.  Congresswoman Georgia Lusk was third, running more than 4,500 votes behind John Miles.

There were some hard feelings following that bruising primary.  John Miles also served only a solitary term in Congress, preferring to try and reclaim the governorship in 1950.  Much to his surprise, and that of most everybody else, Miles lost unexpectedly to Republican gubernatorial candidate Edwin L. Mechem.  Miles never again was elected to public office.

After serving one term in Congress, Georgia Lusk had been defeated by her fellow Democrats.  Still, Mrs. Lusk made some friends while serving in the House of Representatives and even though only a freshman representative, she was appointed to serve on the War Claims Commission after her term expired by President Harry Truman.  Georgia Lusk continued to serve on the commission, which paid as well as a seat in Congress, until she and the other Democratic members were fired by incoming GOP president, Dwight Eisenhower in 1953.

Georgia Lee Lusk came home to New Mexico and promptly announced her candidacy for Superintendent of Public Instruction once again.  The former congresswoman won the general election and resumed her old post for a fifth term.  Mrs. Lusk won a sixth term in 1956.  Following her reelection, Mrs. Lusk told the press, “This is my swan song.  I do not plan to run again.”  Georgia Lusk’s announcement was her declaration of her intent never to run for public office again.

By 1960 Georgia Lusk was still on the campaign trail, albeit not for herself.  The former congresswoman was busy campaigning for her son, Thomas E. “Gene” Lusk.  Gene Lusk was a member of the New Mexico State Senate and had served eight years and was then Majority Leader.  Gene was a candidate for Congress in the Democratic primary against incumbent Joseph Montoya.  Georgia Lusk had been quite popular in much of the district with one reporter noting she had set records for majorities in some of the counties.

The former congresswoman’s last political hurrah was in 1966 when her son Gene was the Democratic nominee for governor, the pinnacle of political success in New Mexico.  Mrs. Lusk accompanied her son when he made a triumphant return to her birthplace of Carlsbad.  Gene lost a close race to Republican David F. Cargo.  Gene Lusk died in 1969.

Georgia Lee Lusk died in an Albuquerque hospital on January 5, 1971.  She was seventy-seven years old.  Mrs. Lusk remained the only woman to represent New Mexico in Congress until the election of Heather Wilson in 1998.