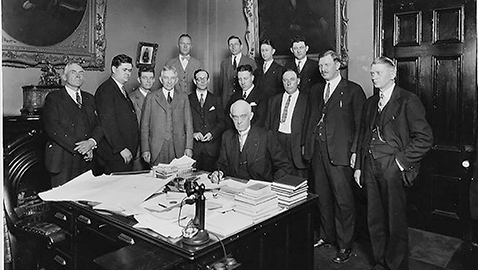 By Ray Hill
Austin Peay had won election as Tennessee’s governor in 1922 and had been reelected to another two-year term in 1924 with only nominal opposition.  In seeking a third term in 1926, Peay faced a significant obstacle in State Treasurer Hill McAlister.  McAlister had cobbled together a coalition of urban interests and enemies of the Peay administration to mount a serious challenge.  While Tennesseans frequently reelected governors to a second term, a third term was something else entirely.  McAlister had been campaigning for months by the time the governor entered the primary campaign in June of 1926.

With little more than a month to go before the election, Governor Peay was picking up speaking dates, while McAlister seemed to linger in communities.  For the first week of July, the Peay campaign announced the governor would speak in Bells, Bolivar, Selmer, Brownsville, Jackson, Reelfoot Lake, McKenzie, Camden, Waverly, Centerville, and Lebanon.  Hill McAlister’s own campaign only confirmed visits to Lawrenceburg, Weakley County, and McKenzie.  It soon became readily apparent the governor was drawing bigger crowds, especially in the rural counties where he was popular.  After moving through much of West Tennessee, the governor crisscrossed the state and kept speaking dates in East Tennessee.  Austin Peay spoke in Morristown and Greenville on July 13; Knoxville on July 14; Cleveland on July 15 and was on his way back to Middle Tennessee where he spoke in Winchester on July 16 and McMinnville on July 17.

The July 4th holiday has long been an opportunity for politicians to press the flesh, greet old friends and make new ones.  Governor Peay spoke at Reelfoot Lake where his supporters sponsored “an old fashioned barbecue.”  Estimates of those attending the barbecue ran as high as 25,000 by Luke Lea’s Tennessean.  Whether the number gathered to hear Austin Peay and eat barbecue was that high is quite doubtful, but the number did likely run into the thousands.  Former governor Tom C. Rye introduced Peay as “the greatest governor Tennessee has ever had.”

Dr. John R. Neal, who would become one of Tennessee’s most persistent perennial candidates for public office, returned from having spent eight days in Memphis on behalf of his own gubernatorial campaign.  Neal denied a claim by the McAlister campaign headquarters their candidate was rapidly gaining strength in Shelby County.  Dr. Neal claimed he had received “a splendid reception” while in Memphis and believed his “liberal policies had met with hearty support” while in Shelby County.  Dr. Neal snorted at the notion Hill McAlister was picking up support in Memphis, snapping the State Treasurer was “practically unknown there.”  Neal’s forecast was wildly skewed.  Out of 19,303 ballots cast in Shelby County’s Democratic primary, Dr. John R. Neal would receive exactly 231 votes.

McAlister had another former governor active in his own campaign.  Benton McMillin, the “Old Warhorse” of Tennessee’s Democratic Party, had only narrowly lost the nomination to Austin Peay in 1922.  Eighty-one years old, McMillin remained highly popular in much of Tennessee and especially in Tennessee’s Fourth Congressional district, which he had represented in Congress for twenty years.  McMillin spoke on McAlister’s behalf in Orlinda, Tennessee and met the candidate in Gallatin for supper.  The former governor also introduced McAlister in Wilson County where Benton McMillin had long been popular.

McMillin had not forgotten Austin Peay had won the Democratic nomination in 1922 solely based upon the election returns from Shelby County.  While campaigning for McAlister, McMillin grumbled, “Governor Peay was elected four years ago and he finally had to go to Memphis to do that.”

Peay had done quite well in Shelby County in 1922 and had also had the support of Clarence Saunders, the founder of the Piggly-Wiggly grocery chain.  As much a showman as a businessman, Saunders had built the opulent “Pink Palace” as his residence in Memphis and had thought to make himself a rival to E. H. Crump as a political power in Shelby County.  Saunders soon found himself in the midst of serious financial difficulties while Crump became leery of the governor.  Anticipating his 1924 reelection campaign, Austin Peay was practical enough to renew his alliance with the Memphis Boss, although Crump’s friend Senator McKellar recommended they remain “neutral for the present.”  Evidently, Peay and Crump reached an agreement that would give the governor Shelby County’s support in the 1924 Democratic primary and the Shelby County legislative delegation in the 1925 session of the legislature.  In exchange, Peay would back Crump’s candidate for the State Election Commission as well as locate a medical school in Memphis.

By 1926, Crump was dissatisfied with an administration he believed favored East and Middle Tennessee over West Tennessee.  Previously not much interested in state politics, Crump was forced to reckon with a governor whom he believed was encroaching more and more on local authority.  From Crump’s perspective, Austin Peay proposed to transfer more power to Nashville from local governments.  Crump ended his truce with Governor Peay and gave his all out backing to Hill McAlister.

Peay’s friend Clarence Saunders, offended by the notion anyone would wish to seek a third term as governor, came out against the governor.  Saunders was no real force in politics, but he was quite adept at attracting attention to himself.  Having lost the Piggly-Wiggly stores, Saunders had started a new grocery chain as “The Sole Owner of My Name” stores.  Saunders inserted himself in the gubernatorial race with repeated attacks on Peay, whom he described as aloof, cold, and unfeeling.

H. Alexander, a political reporter for the Nashville Tennessean, who later wrote the official biography for Austin Peay, turned his column into a virtual extension of the governor’s campaign. In mid-July Alexander was quoting “leaders in the mountains” who were predicting Peay would “sweep East Tennessee by the largest majority ever accorded a candidate for the Democratic gubernatorial nomination…” Governor Peay was certainly very popular in East Tennessee and had received much of the credit for citing the Great Smoky Mountains National Park, although it had been Congress who authorized its creation in 1926.  Peay serenely campaigned upon his record of reforming state government, building roads and supporting schools, while McAlister was left to decry “autocracy” and placing too much power in the hands of the governor.

Peay was campaigning in East Tennessee, speaking in Johnson City during the last two weeks of July.  The governor and his party stopped briefly in Kingsport while traveling by train.  Peay greeted friends and supporters before boarding the train again on his way to Rogersville.  Peay was confident while campaigning in East Tennessee and apparently agreed with the predictions he would do well in the region, telling his Johnson City audience, “The politicians can’t fool the people.  There is little opposition to me in East Tennessee, and I am going to sweep this section of the state.”  The governor acknowledged he had fared poorly in East Tennessee when he had faced Benton McMillin in the primary.  “I carried only two counties in this section,” Peay recalled, “Hawkins and Sullivan.  I am going to carry both of them again and every other county in the First and Second Congressional districts.”

George Fort Milton, publisher of the Chattanooga News, visited Nashville and gave out an interview stating he believed Austin Peay would easily win renomination.  “If the election were held today, Peay’s majority would be 40,000 or 50,000 votes,” Milton said.  “By the day of election his majority should exceed those figures, as there is an unmistakable rush in all parts of the state to get on the Peay bandwagon.”  The notion Peay would win the Democratic primary by 40,000 votes or more became almost a daily staple of articles appearing in Luke Lea’s Tennessean.

Peay’s supporters underestimated the extent of the opposition to Governor Peay.  The 1925 session of the Tennessee General Assembly had been contentious and Peay had encountered opposition from legislators in Middle Tennessee, all of whom were Democrats.  Crump, as well as Mayor Hilary Howse of Nashville, was strongly opposed to Peay, most especially because the governor’s programs tended to tax the urban areas and redistribute the revenue in rural communities and counties.  Crump was also highly suspicious of the close relationship between Peay and Luke Lea, whom the Memphis Boss cordially hated.  Suffering from heart disease, the governor had asked Lea to “keep an eye on things” while he retreated to a sanitarium in Battle Creek, Michigan for rest.  Still, Austin Peay, despite their warm personal friendship, remained independent.  When Lea suggested campaign contributions might flow should the governor select one particular company to provide cement for road projects, the governor curtly replied such a thing was “unthinkable.”

Speaking in Carthage, Tennessee, Governor Austin Peay poked at Hill McAlister, daring his challenger to take a stand on the issue of showing “moving picture shows” in Memphis on Sundays.  Peay also took a swipe at Kenneth McKellar, thundering “the people of Tennessee will not be swerved in their choice of gubernatorial candidates by Senator K. D. McKellar or anyone else in Tennessee…”  Doubtless, Peay knew McKellar, like Crump, was supporting McAlister.  McKellar and McAlister had long been personal friends and while not as open as Crump, the senator was doing what he could for Peay’s opponent.

As the gubernatorial campaign entered the last week, both candidates scrapped for votes.  The Nashville papers heaped scorn and ridicule upon the candidates they opposed and heaped praise on those they supported.  Both sides predicted victory.

Election Day brought Austin Peay a third term, but only barely.  The forecasts Governor Peay would win East Tennessee proved to be accurate.  The governor won Knox County 3,998 to 1,009.  Peay’s margins in many of the more rural East Tennessee counties were astonishing; Peay carried Blount County 827 to 111 for McAlister.  Peay swept Loudon County 500 to only 97 votes for McAlister.  Hill McAlister got a respectable 3,973 votes in Hamilton County, but Governor Peay tallied 5,034 ballots.  McAlister began to make up ground in Middle Tennessee and carried Davidson County 9,844 votes to 5,360 for Peay.  McAlister ran well enough in West Tennessee, but carried Shelby County 15,415 to 3,657 votes for Austin Peay.

When all the ballots were counted, Governor Austin Peay won the Democratic nomination with 96,545 votes to 88,448 for Hill McAlister.  The governor had prevailed by 8,057 votes.  Dr. John R. Neal, who had actually traveled all across the state, was likely surprised to note he received only 2,015 votes from his fellow Tennesseans.

“The most progressive and constructive administration in the history of the state has been vindicated and approved,” an editorial in the Tennessean crowed.

Austin Peay crushed his Republican challenger, Walter White, in the general election, winning almost 65% of the vote.  Peay became the first Tennessee governor since the Civil War to win a third term.

Yet Governor Peay’s last electoral triumph may well have been a pyrrhic victory.  Increasingly ill, the governor had real difficulty with the legislature during the 1927 session of the General Assembly.  Peay’s heart condition worsened and despite his frailty, Tennesseans were stunned by the governor’s sudden death of a cerebral hemorrhage on October 2, 1927.  Austin Peay was only fifty-one years old.

The Tennessean bitterly lamented the governor’s life had been cut short by “the unceasing, bitter, malignant and intense hatred” of Peay’s political opponents “who sought to destroy him because they could not bend him to their selfish will.”  Luke Lea’s Tennessean lauded Peay as perhaps the greatest governor Tennessee had ever had and sadly noted, “Austin Peay gave his life for his state.”

As late as 1981, fifty-two Tennessee historians were asked to rank the Volunteer State’s governors on the basis of ability and accomplishments and Austin Peay was ranked number one.  Thus far, Austin Peay is the only governor of Tennessee to die in office.  His legacy endures and Austin Peay State University is named for the late governor.

Austin Peay sleeps in greenwood Cemetery in his hometown of Clarksville.