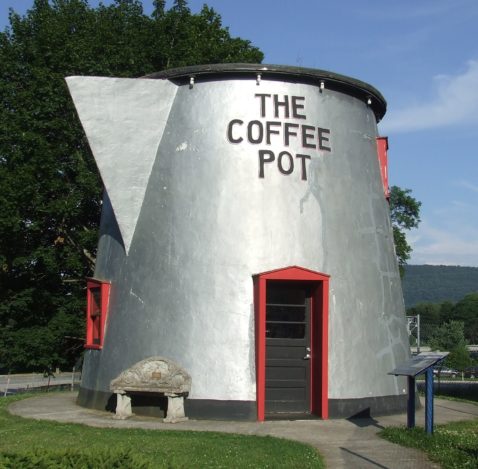 The website “Roadside America” does a pretty good job of listing unusual attractions, sites, and oddities in our nation and Canada. You can pick a state and take a look at everything from Knoxville’s Airplane Filling Station to Alaska’s Igloo City.

Making a side trip on any journey sometimes makes the travel better and gives you a chance to get out of the car and stretch. Sometimes the creation, saving and promotion of an odd attraction can be a great benefit for a smaller community. Within our region are several examples such as the historic courthouse in Kingston, the old gasoline station in Tazewell, and the Crockett Tavern in Morristown.

On our vacation, a long camping trip to Canada, we stopped at many of these unusual landmarks, attractions and preserved places. Probably the best example of a community effort to save and promote an odd attraction is a large unusual structure in Bedford, Pennsylvania.

The Coffee Pot was built in 1927 by David Berton Koontz and served as a diner, bus station and bar over the years. The 18-foot tall metal building, shaped like a huge coffee pot, was closed in 1980 and sat abandoned and deteriorating until 2003 when the Lincoln Highway Heritage Corridor group bought it and moved it to the Bedford County Fair Grounds.

The old Lincoln Highway, stretching from Time Square in New York City to San Francisco, was built in 1913 and was the first transcontinental auto highway in our nation. In the Bedford area there are many other small attractions available free to the public.

Pennsylvania is a haven for anyone interested in covered bridges and Bedford County has 14 of the hand-built structures, some as old as 100 years. The county also has a “Gravity Hill” where it appears your vehicle rolls uphill along the route.

Bedford is just off Interstate 70/76 and not far from the site of the Flight 93 National Monument and the Johnstown, Pa., Flood Museum.

Anyone planning a vacation or travel in the area might want to keep an eye out for unusual landmarks, structures or historic sites. Certainly The Coffee Pot is one of those and anyone in Bedford can direct you to that odd structure. If you keep an eye out for little known attractions or oddities you might discover places you didn’t expect to see.