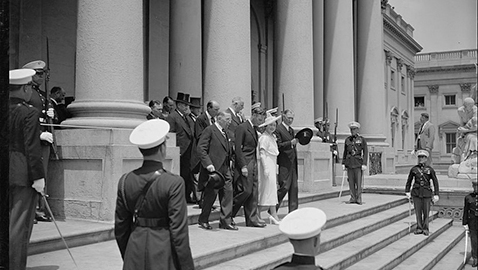 The fascination with royal families is hardly new.  I well remember just how many people were caught up in the wedding of Prince Charles to Diana Spencer.  Like every capital of a civilized country, Washington, D.C. has a vibrant social life and the visit of King George VI and his queen, Elizabeth, to the United States captivated much of the country.    Those folks who have watched The Crown on Netflix realize their daughter is Queen Elizabeth II.

The invitation to visit America had come from President Franklin Delano Roosevelt and it was heralded throughout the media of the day for no reigning British monarch had ever trod on American soil.  The United States and Great Britain had something of a checkered history since the Colonies broke away from the British Empire.  The Capitol still carries scars from the War of 1812 when President James Madison and First Lady Dolly Madison had to flee before British troops burned down the White House.  Relations between the two countries had not always been amicable and there were periods when it was downright tense.  The United States had entered the first World War on the side of the Allies, which included Great Britain, but it was Franklin Roosevelt and his invitation, as well as King George’s acceptance of that invitation, which ushered in a new era between our two nations.  Since that time, Great Britain has always been the greatest ally of the United States and vice versa.

When President Roosevelt sent his invitation for the royal couple to visit America, Europe was under the dark clouds of war.  Adolf Hitler, once Chancellor of Germany, now ruled as a supreme dictator.  Allied with Benito Mussolini, the fascist dictator of Italy, Hitler’s appetite for expansion  – – – he had already annexed neighboring Austria and swallowed Czechoslovakia – – – had not been appeased by Great Britain and France.

Franklin Roosevelt was one of the shrewdest politicians ever to occupy the White House.  It was FDR who guided America through two of the greatest, almost certainly the greatest challenges, to face our nation in modern times: the Great Depression and World War II.  Roosevelt realized the strength of isolationist sentiment in the country as Hitler threatened the peace of the world in Europe and the Japanese Empire gobbled up territory in the Far East.  President Roosevelt hoped a visit to the shores of America would allow Americans to have a better understanding of their British cousins.  While it might seem ostensibly social in nature, FDR gambled it would help to foster a political bond between the United States and Great Britain.

King George VI wrote back, in responding to President Roosevelt’s invitation to visit the United States, his acceptance.  The King told the President he and the Queen could only manage a short visit to America as the British were living through “disturbed days” in Europe.  William C. Bullitt, FDR’s ambassador to France, had written the President, “The grand smash seems fairly imminent.”

As President Roosevelt had calculated, the widely covered visit of King George and Queen Elizabeth was a rousing public relations success.  The great-great-great grandson of King George III solemnly laid a wreath at the tomb of George Washington.  Their Britannic Majesties enjoyed their first hot dogs at President Roosevelt’s home in Hyde Park, much to the horror and dismay of his mother, Sara Roosevelt.  The King ate his hot dog and immediately asked for another.  The King and President Roosevelt sipped beers on a warm day with a variety of folks, including the great, near great, and plain, everyday people.  Perhaps the only snag in the program was an overly long presentation of a Native American dance by performers selected by First Lady Eleanor Roosevelt.

The royals had crossed the U. S. – Canadian border to enter Niagara Falls, New York.    King George and Queen Elizabeth visited New York City, the site of the World’s Fair before departing for Washington, D.C. where the couple was received formally as if it were an official State Visit.  In New York, the King had sipped tea with J. P. Morgan, the American titan of finance.

A reception given by the King and Queen for official Washington caused a frenzy of activity, especially on the part of the Capitol’s women folk, who hurried to select gowns.  Initially, only a few ranking members of Congress were to be invited to a garden party at the British Embassy, but the outcry was so vociferous the Ambassador invited the congressmen and their wives.  Senators and congressmen were deluged by most everyone they had ever known, along with those they had never met, all of whom were begging for tickets to the event.  Fortunately, the British ambassador solved that problem by announcing the event was only for the Members of Congress.

Still, curious Tennesseans descended upon Washington, D.C. and the Volunteer State’s senior United States senator, Kenneth D. McKellar, threw open the doors of his office to his constituents.  McKellar suite of offices in the old Senate Office Building afforded onlookers a particularly good view of Delaware Avenue, which was along the route of the parade for King George and Queen Elizabeth.  According to the Chattanooga News, McKellar hosted more people from his home state than any other senator that day.

Tennessee’s junior U.S. senator, Tom Stewart, found his own office abuzz with excitement.  His staff members were all agog over the reception at the British Embassy and listened eagerly for tidbits about the apparel being selected by the wives of senators, including Mrs. Stewart.  Like many senatorial wives, Helen Stewart had immediately gone shopping for a new dress as soon as she knew she would be attending the garden party at the British Embassy.  Mrs. Stewart came back with a white and chartreuse dress bought especially for the occasion.  Senator Stewart told a reporter he was in something of a quandary as to what to wear himself, confessing he owned a cutaway coat and striped trousers, which was considered formal wear for men at the time.  Stewart confessed he also had his eye on “a neat, cool, white suit.”  “Senator Ellender (of Louisiana) and some of the others are going to wear white suits,” Tom Stewart explained.  “I might do it myself.  I am giving it plenty of thought.”

Senator McKellar, a bachelor, was not all atwitter over the impending party and said he would probably wear his cutaway coat unless he thought several of the gentlemen would be turned out in an array of summer white suits.  Fortunately, white suits had indeed been sanctioned by the British Embassy.

The only member of the Tennessee Congressional delegation who was not going to the garden party was Congressman Sam D. McReynolds of Chattanooga.  McReynolds was ailing and had only been released from Bethesda Naval Hospital where he had been treated for a heart condition.  Although the congressman’s doctors thought McReynolds was doing “splendidly”, they did not want him overly excited.  In fact, Congressman McReynolds was not doing at all splendidly; he would die a month later from heart disease.

At the British Embassy, King George stood for a few moments, scanning the assembled congressman and senators and was then joined by his Queen, who was attired in white satin.  Queen Elizabeth wore white shoes, a starched white lace hat and carried long lace gloves and a parasol.  Senator McKellar, elegant in his black cutaway with braided edges, was the sixth senator to be presented to Their Majesties.  McKellar later related the King had offered his hand “in regular Tennessee style.”  Senator McKellar took the King’s hand and shook it, saying, “I am glad to welcome you to our country.”  The King quickly replied, “I am very happy to be here.”  McKellar, moving to shake hands with the Queen, said, “I am glad to greet you” and was pleased when she chirped, “I thank you ever so much.”

Senator Tom Stewart was grinning when he approached, having decided  upon a double-breasted summer suit instead of the more formal cutaway coat.  The members of the House followed those of the Senate in the procession.  Each came in the receiving line according to his or her seniority.  J. Will Taylor, a Republican who represented the Second Congressional District, arrived wearing a blue serge business suit.  Carroll Reece, Walter Chandler of Memphis, and Jere Cooper of West Tennessee all opted for the more formal wear.  Freshman congressman Albert Gore, Joe Byrns Jr., Wirt Courtney and Herron Pearson all wore their “every-day work clothes” which the media said didn’t seem to make much difference to the royal pair.  In fact, one reporter thought if expression was any measure, the King and Queen enjoyed “lawmakers so attired all the more.”  The King, who was about 6’2 and towered over his 5’2 Scottish wife, personally greeted every Member of Congress in the receiving line with grace, good cheer and impeccable manners.

Every member of the Tennessee Congressional delegation had something kind to say about the royal couple, save for one: Congress Joseph W. Byrns Jr. of Nashville.  Returning to his office, Byrns complained, “What a couple of flat tires they turned out to be.”  Byrns was serving his first term in Congress and was the son and namesake of Joseph W. Byrns, the late Speaker of the House and for decades the congressman from Tennessee’s “Hermitage District.”  Byrns added an uncomplimentary comment about the Queen’s “wooden gestures.”

Senator McKellar said, “I was impressed by their graciousness and friendliness and sociability.”  Senator Tom Stewart told reporters he, too, liked the royal couple and had been struck by the “Democratic” manner in which the British monarchs conducted themselves.  Walter Chandler offered, “They’re just folks.”  Congressman Wirt Courtney said, “The queen was lovely, and I was very much impressed with the king.”  Herron Pearson admitted his “estimate of them increased tremendously.”  Republican Carroll Reece of upper East Tennessee said he had been “particularly impressed with the charm of the queen.”  Congressman Jere Cooper, a high ranking member of the Ways and Means Committee, gruffly told a reporter he was far too busy working on social security matters to discuss social matters.

Senator Robert R. Reynolds of North Carolina quipped he had chosen not to attend the party as the king and queen could not vote in his home state.  He remained at the Capitol, entertaining North Carolina visitors.

The lack of graciousness demonstrated by young Congressman Joe Byrns Jr. appalled a goodly number of the people he represented in the Hermitage District, which was famous for its hospitality.  It was unthinkable to many of the folks he represented he would publicly say anything unkind about the British monarchs.  It was a foolish statement, which he soon denied making.  Byrns certainly had neither the courtliness or political acumen of his father.  Joe Byrns Jr. was renominated in 1940 but lost to an Independent.

A formal dinner at the White House hosted by President Roosevelt and First Lady Eleanor Roosevelt featured a menu of clam cocktail, calf’s head soup, terrapin, boned capon (chicken), cranberry sauce, peas, buttered beets, sweet potato cones, cornbread, frozen cheese and cress salad.  For dessert, the guests enjoyed maple and almond ice cream with white pound cake and coffee.  The gold service used for the dinner for the King and Queen of Great Britain, ironically, dated back to the administration of James Madison.  In his toast to the royal couple, FDR lifted his glass and said, “It is because each nation is lacking in fear of the other that we have unfortified borders between us.  It is because neither of us fears aggression on the part of the other that we have entered no race of armaments the one against the other.”

When King George VI and Queen Elizabeth returned to Britain in 1939, they took the good will and good wishes of millions of America back home with them to Buckingham Palace.