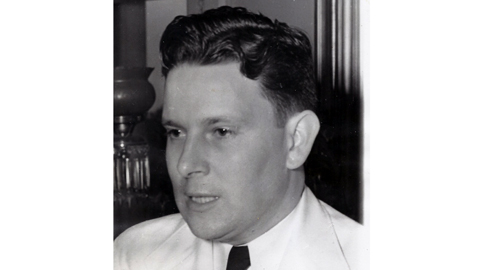 Senator Burton K. Wheeler of Montana, a fierce isolationist, thundered, “I don’t believe there is any crisis.  I don’t believe the people of the country should be allowed to think there is a crisis.  I am unalterably opposed to the propaganda being sent out of Washington and New York that we are going to get into this war.”

Senator Robert LaFollette, Jr., a Progressive from Wisconsin, offered an amendment for a national “advisory referendum”, before any declaration of war could be made.  Key Pittman, the frequently sodden Chairman of the Senate Foreign Relations Committee, in speaking on LaFollette’s amendment, found himself entangled in a rancorous debate with Senator Bennett Champ Clark of Missouri.  Clark had accused Pittman and others of trying to obscure the issue at hand, a charge that made the Nevadan tremble with anger.  “Does the senator include my remarks in that?” Pittman demanded.  Senator Clark thought about it for a moment before replying, “I think the senator’s remark should be so classed.”

“You have a habit, in your complete conceit and vanity of engaging in these things,” Pittman roared at Clark.  Senator Pittman muttered something about a “lack of ethics” when Bennett Clark bawled, “Mr. President, I call the senator to order for making personal remarks.”  Senator Scott Lucas of Illinois, sitting as the Senate’s presiding officer, ordered both Pittman and Clark to their seats.

The final vote tally in approving the Roosevelt – Hull bill repealing the arms embargo and extending the cash and carry provision was 63 – 30.  The noninterventionists finally conceded defeat, at least in the Senate, but believed their intransigence might help when the House of Representatives considered the legislation.  Senator Bennett Clark announced, “I certainly think the fight has slowed up the war fever.  We have won a great moral victory.”

At least one freshman senator was not impressed by the formidable William E. Borah of Idaho, one of the most notable members of the United States Senate.  Tennessee’s Tom Stewart said the entirety of Borah’s major speech in the Senate against repealing the arms embargo was predicated on a premise he just could not accept.  “I think he’s fundamentally wrong on the whole thing,” Stewart said.  “After all, the only governments left in Europe that are like our own are France and England, and I don’t see why we shouldn’t help out our own kind of folks.”  The premise which Senator Stewart could not accept was Borah’s belief it made no difference whatever to the United States who won the war in Europe.

There was still reason for the isolationists to be hopeful.  While the Senate had approved revising the neutrality law by a lopsided margin, the battle brewing in the House of Representatives promised to be a bitter brawl.  Nobody believed the House was ready to ratify the Roosevelt – Hull proposal by the same kind of thumping majority it had won in the Senate.  The Roosevelt administration and Congressional leaders soon discovered they had only a narrow margin in the House.

As had been the case in the United States Senate, each side was interested in a test vote to ascertain its strength.  The first test vote was an attempt by House Republicans to open up the bill passed by the Senate for amendments.  The result was a resounding victory for the administration with House members rejecting the proposal 237 – 177.  Both Tennessee Republicans, J. Will Taylor and Carroll Reece, were vocal in their support to open the bill for amendments.  It was Congressman Taylor who opened the fight for the GOP House members.  “I am in sympathy with the principles and objectives of this bill but am opposed to this rule,” Taylor told his colleagues.  “The rule is arbitrary and more or less a subterfuge.  It does not permit adequate debate on this, the most important piece of legislation before Congress since the declaration of war in 1917.”

“Why all this unseemly haste?” Taylor wondered.  “Congress is not operating under the Wage-Hour Law.  It should remain in session until the regular session convenes in January.  It would give the people a sense of security to have Congress remain in session.”

Taylor’s comment protesting “unseemly haste” by the Democratic leadership provoked a reaction from the House galleries.  Taylor’s remark drew boisterous applause from a group of women in the galleries, causing Speaker William Bankhead to sharply rap his gavel and remonstrate with the offending ladies.

Will Taylor had already announced his intention to vote for the neutrality bill.  “At the meeting od the Rules Committee yesterday, I took the position that this should be handled as if it were a new bill, subject to amendment,” Taylor explained.  “However, the majority voted what is in effect a gag rule.  I see no reason why we should be in a hurry about this.  The Senate took four weeks and I think the House should have a reasonable time.”   Congressman Taylor thought the bill passed by the Senate was “all right except for some minor provisions, such as permitting the RFC to underwrite credit for exportation.”

The issue squarely facing the House of Representatives was the Senate version of the neutrality bill was diametrically opposed to that passed by the House during the last session of Congress.  The Senate had repealed the embargo on arms and munitions while the House had approved an embargo on all “lethal” weapons, which included not only gun and ammunition, but also poisonous gases and chemicals.  Yet the House had not banned the sale of other items that could be used by belligerent nations for war such as airplanes and oil, which now literally fueled mechanized warfare.  The tone of the debate could be summarized in an exchange between Majority Leader Sam Rayburn of Texas and Republican Hamilton Fish of New York.  Fish was an ardent opponent of intervention, although like Carroll Reece, the New Yorker was no coward, quite the contrary.  Fish had fought in the First World War, leading a unit of African-American soldiers that were known as the “Harlem Hellfighters.”  Fish’s unit spent more time on the frontlines than any other American regiment.  Congressman Fish had been awarded medals by the French government, as well as his own.

Hamilton Fish was one of Franklin Roosevelt’s bête noirs and the President loathed the fact his home in Hyde Park was in Fish’s Congressional district, yet Fish could claim his own family was at least as old and distinguished as that of FDR.  Fish’s father had been a member of Congress and his grandfather had been Secretary of State under President Ulysses S. Grant.  His great-grandfather had fought in the American Revolution for independence from Great Britain.  A former athlete, Hamilton Fish was tall and lanky with a craggy face and could hold his own in any debate.  Congressman Fish complained the Democratic leadership of the House was forcing a gag rule on the neutrality bill.  His face turning crimson and his arms windmilling about him, Hamilton Fish cried, “Those who vote for this gag and cut off debate are committing political suicide.”

Sam Rayburn, unperturbed, calmly told his colleagues the Senate had managed to debate the issue on a “high plane”, pointing out there had been “no boos, no accusations of phony bills or city slicker tactics.”  Rayburn said when the House of Representatives had finished its own debate, he hoped the same could be said for the House.  While Sam Rayburn held out hope for his colleagues, it proved to be futile, as Congressman Adolph Sabath, Chairman of the House Foreign Affairs Committee, was greeted by a hail of boos when he had chastised Hamilton Fish for “trying to deliver us to Hitler on his last visit to Europe.”  Sabath was referring to a visit to the European continent by Fish where the New Yorker had attempted to meddle in the foreign policy of the United States.  Fish had urged the European powers to lay down their arms and come together and settle their differences in a peace conference.

Youthful Congressman Albert Gore received a signal honor from the Democratic leadership of the House of Representatives when he was selected to lead off the debate on the neutrality bill on the second day of speeches.  Gore’s own speech focused on the “connection between repeal of the arms embargo and this country’s national defense program.”  The Nashville Tennessean’s Washington Bureau reporter said Gore had been selected to speak “because of his oratorical ability”, which had been proven when the young Democrat had derailed an administration measure on housing earlier in the year.  The second reason was even simpler still; Gore came from the hometown of Secretary of State Cordell Hull.  Congressman Gore used both his oratorical ability and his wit to “severely” rebuke a Republican colleague whom the Tennessean believed had uttered “an attempted slur” on Secretary Hull.  Minnesota Congressman Harold Knutson was one of the more senior Republicans in the House of Representatives, as well as a fierce isolationist and a bitter critic of the Roosevelt administration.  Knutson claimed the Secretary of State had changed his mind about the arms embargo since penning a letter to Senator Key Pittman in 1938.  “Of course, Secretary Hull was 100 per cent right in what he wrote to Senator Pittman,” Knutson told his colleagues.  “I am wondering what has caused him to change his position on the subject.  Is it due to pressure from the international bankers and the munitions makers?”  Gore jumped to his feet and demanded time to reply to Congressman Knutson.

“The gentleman who preceded me inferred by his remarks that a fellow townsman of mine had taken his position on the embargo because of the influence of munitions makers,” Gore said.  “I have known Cordell Hull since soon after I knew my own father and I know him to be sincere and big and that his motives are above reproach.”

Gore looked at his Minnesota colleague and barked, “I have heretofore had a very high regard for the gentleman preceding me, but am frank to say that his questioning the motives or purpose of so great a man raises a question in my mind as to his own purity, patriotism and depth of sincerity.  Such things are not proper in a discussion of a matter so vital to the nation as this question.”

Wirt Courtney of Franklin, Tennessee, like Albert Gore, was a freshman congressman.  Courtney’s “maiden” speech was on the topic of repealing the arms embargo and he spoke for thirty-five minutes.  His colleagues remained in their seats as he spoke eloquently and with feeling.   Congressman Courtney said literature was being mailed to his district in an attempt to influence the opinions of his constituents against the Roosevelt administration and while he hesitated to break his silence, he felt he could not do so and keep his “self-respect.”  “I hate war with every fiber of my being,” Courtney said.  “I have told my constituents and here renew the pledge, that I will never vote to send America into this war unless further developments bring about a cause so just and righteous to my mind, that immediately voting for war I will myself enlist in the armed forces of the country.”

The Tennessee Congressional delegation was doing its part in Congress as the House of Representatives continued to debate the neutrality bill.