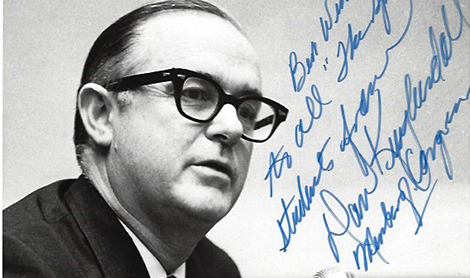 Kuykendall was not a Tennessee native, having been born in Cherokee, Texas.  Dan Kuykendall’s job as an executive with Proctor & Gamble brought him to Memphis.  Kuykendall quickly became active inside Shelby County’s Republican party, organizing and working for Richard Nixon’s 1960 presidential campaign.  Two years later, Kuykendall managed the congressional campaign of Bob James who came within 1,200 votes of toppling veteran Congressman Clifford Davis, the last vestige of the Crump machine.  Kuykendall was no East Tennessee Republican; Dan Kuykendall was a red meat Republican and deeply conservative.  With a voice that would have done service to a radio announcer and his trademark horn-rimmed glasses, Kuykendall was the GOP nominee for the United States Senate in 1964 against Albert Gore.  Both of Tennessee’s seats in the U. S. Senate were up for election that year due to the death of Estes Kefauver and Kuykendall gave Albert Gore the closest race of his career up to that point.  Having won considerable notoriety from his race for the Senate, Dan Kuykendall won the Republican nomination for Congress from Tennessee’s Ninth District and faced incumbent George Grider in the general election.  Grider had first been elected to Congress in 1964 after having defeated Clifford Davis inside the Democratic primary.  Grider won a narrow victory over Bob James who was running again for Congress that year.

Unlike Clifford Davis, who had grown more conservative over the years, George Grider was a committed liberal and the race against Dan Kuykendall gave voters a clear- cut choice.  Many of those Democrats who had supported both the Crump regime and Cliff Davis were drifting toward the Republican party.  Nixon had eked out a narrow victory inside Shelby County in 1960 against John F. Kennedy.  Howard Baker had carried Shelby County by more than 15,000 votes over Congressman Ross Bass in the 1964 Senate race, while Albert Gore nudged out Kuykendall by approximately 10,000 votes.  Even Barry Goldwater only trailed Lyndon Johnson by less than 11,000 votes in Shelby County.  Kuykendall, a frequently tart-tongued conservative with a bare knuckles style of politics, was well suited to make a congressional bid against Congressman George Grider, who took a more cerebral approach to politics.

Richard Nixon came to campaign for Dan Kuykendall and two other West Tennessee GOP congressional candidates in the fall of 1966.  House Minority Leader Gerald Ford also visited Memphis on behalf of Kuykendall.  In mid-October, a columnist for the Nashville Tennessean speculated the “high hopes” many Republicans had for a Kuykendall victory had somewhat diminished as George Grider seemed to be gaining the lead in the congressional race.  Congressman Grider was running as a stalwart supporter of the Johnson administration while Kuykendall pitched his campaign as a critic of LBJ.  Always something of a showman, Dan Kuykendall highlighted the frustrations of many voters with inflation, opening his campaign at a grocery store and pointing out the high prices of food to consumers.  Kuykendall noted the price of foodstuffs had risen 4 ½% since the first of the year and quite nearly 16% since Dwight D. Eisenhower had been president.  Kuykendall charged Democratic administrations and a Democratic Congress was responsible.  Grider replied wages had risen faster than the rate of inflation and thought families were spending less on food overall.  As Election Day approached, just about everybody agreed the race between Dan Kuykendall and Congressman George Grider would be close.  The Tennessean thought Grider remained a “slight favorite.”

As Howard Baker was winning the race for the United States Senate in 1966, Dan Kuykendall beat George Grider.  Kuykendall proved to be a reasonably popular congressman, winning reelection in 1968 and 1970 easily.  Before deciding to run for Congress in 1970, Kuykendall briefly flirted with running against Senator Albert Gore once again.  Having won a seat in Congress and coming from West Tennessee, Kuykendall was considered an even stronger candidate, especially after having held Gore to 54% of the vote in a year that was less than stellar for Republicans.  Kuykendall’s senatorial ambitions potentially put him into conflict with East Tennessee Congressman William E. Brock of Chattanooga, who was already gearing up to run against Gore.  Kuykendall was serious enough to ponder polling data and taking his own poll to determine whether he could win the GOP primary and general elections.  It was clear there was going to be a crowded and heated race for the Republican nomination for governor and some Republicans feared a divisive GOP primary for the U. S. Senate would only help the Democrats.  A poll commissioned by Bill Brock showed the Chattanoogan could beat Kuykendall in a Republican primary.  Whatever his reasoning, Dan Kuykendall eventually decided to run again for Congress while Brock went on to defeat Senator Albert Gore in the 1970 Senate race.  When making his announcement he would seek reelection to Congress and forgo the Senate race, Kuykendall said a primary campaign “with an uncertain outcome but certain damage to all participants” weighed heavily in his thinking.

While Dan Kuykendall decided against running for the United States Senate, he was outspoken in his belief the GOP gubernatorial nominee should be from West Tennessee.  More specifically, Kuykendall thought the Republican gubernatorial candidate should be from Memphis.  A host of East Tennesseans were preparing to run for governor at the time, including State Republican Party chair Claude Robertson and House Speaker Bill Jenkins.  Winfield Dunn, a Memphis dentist, also entered the race and immediately garnered the support of Dan Kuykendall.  To the surprise of virtually everyone, Dunn won the gubernatorial nomination.

Congressman Kuykendall and Senator Gore clashed over tax legislation.  Preparing to run for reelection, the senator supported increasing the personal income tax deduction to $1,000, a proposal Kuykendall immediately labeled “phony.”  Kuykendall scoffed Gore’s notion would aid the wealthy more than the working class.  Gore, Tennessee’s “Old Gray Fox”, retorted, “If Congressman Kuykendall can live on $600 per year and can support each of his dependents for $50 per month, then he stands alone among all Tennesseans with whom I have talked.”  Gore added, “I understood him to say that he voted to raise his salary to $42,500 a year because he was having difficulty getting along on $30,000 a year.”

The congressional pay raise was a sore spot and Gore noted the Memphis congressman had failed to offer an amendment to the tax bill to increase tax credits for dependents.  Congressman Kuykendall snarled the senator had told an “out-and-out unmitigated lie” as he had not voted in favor of the congressional pay hike.  Kuykendall snapped, “Sen. Gore has been around Congress 30 years.  I was aware that he hadn’t learned much, but he certainly should know that a member of the House can’t offer an amendment to a tax bill on the floor.”

By 1972, his district had been slightly reconfigured and was slowly becoming less white.  The Democratic nominee to face Congressman Kuykendall in 1972 was J. O. Patterson, an African-American minister.  Kuykendall won by a solid 55%, but his percentage was down from 1968 and 1970.

When Kuykendall appeared on the House floor holding a noose as congressmen considered the impeachment of President Richard Nixon, he said, “I want everybody in this house to go slow and not be a part of a legislative lynch mob.”  Some Democrats expressed their displeasure by hissing loudly while most Republican congressmen sat in stony silence.  Kuykendall compared Nixon to President Andrew Johnson, who the Memphis congressman said was the victim of political backstabbers.

Kuykendall’s full-throated defense of Nixon may well have been popular with highly partisan Republicans, but it would also ultimately harm the congressman’s reelection chances.

In 1974 Congressman Kuykendall was faced with two serious political problems, the first being his district was hemorrhaging white folks, either through redistricting or flight from Memphis to the suburbs.  The second was his fierce defense of embattled President Richard Nixon.  The departure of many whites from Kuykendall’s district had seriously eroded the congressman’s electoral base, a fact recognized by a young State Representative named Harold Ford.  Ford sponsored a huge voter registration drive to increase the African-American vote inside the district, while also benefitting from support from whites who were dismayed and disgusted by Kuykendall’s last ditch defense of Richard Nixon.  With Nixon’s eventual resignation, Kuykendall’s position inside his own congressional district was weakened further.

Harold Ford had to walk something of a tightrope as the district remained 58% white; Ford faced the challenge of energizing his base in the African-American community without unduly alarming the white community.  Ford campaigned hard, going door-to-door in many white subdivisions.  Ford’s campaign was so well organized some opponents accused him of attempting to revive bossism and wanting to become a “black Crump.”

Democrats sensed the opportunity to defeat perhaps as many as three GOP congressmen in Tennessee.  LaMar Baker, who had succeeded Bill Brock in Congress, and Dan Kuykendall were the primary targets of Tennessee Democrats.  Robin Beard was being challenged by wealthy attorney Tim Schaeffer, but Schaeffer’s chances of beating the young and energetic Beard seemed less plausible than those of Harold Ford and Marilyn Lloyd, who had become the Democratic nominee for Congress after the death of her husband Mort in a plane crash.  Ray Blanton, the Democratic nominee for governor, campaigned along side Harold Ford in Memphis.

Kuykendall and Ford bickered over debates and the congressman finally cancelled any plans to debate his opponent.  Kuykendall said he realized he would be criticized over his decision to refuse to debate Ford, but noted “there aren’t many eight-year incumbent representatives who debate their opponents.”  By mid-October, Congressman Kuykendall knew he was in a tough race.  “The campaign has been tight,” Kuykendall confessed to a reporter during an interview in a Memphis restaurant.  Kuykendall was also candid about his past support for disgraced former president Richard Nixon.  His ties with the former president “certainly will not do me any good” Kuykendall admitted, but said it was part of his record as a congressman.

1974 was a terrible year to run as a Republican and Dan Kuykendall was no exception.  As the early returns began to come in, Congressman Kuykendall was leading Harold ford almost 2-1.  Initially, it appeared Kuykendall had won a narrow victory and was on television making his victory statement when word arrived he had lost.  Several ballot boxes from black wards had been found and the Shelby County Election Commission tally showed Harold Ford winning by 574 votes.  It was one of the closest House races in the country.  Kuykendall was apparently stunned by his defeat.  “I will ask for a recount,” Kuykendall said.

Earlier in the campaign, the verbose Dan Kuykendall had opined, “The only thing that can beat me is just simple arithmetic, voter turnout.”  Kuykendall had tried to do the math in his head.  “I assume his penetration of the white community is the same as my penetration of the black community, and that being the case, voter turnout is the entire election.”  Kuykendall had been right; the election was decided by voter turn out and Harold Ford had turned out a big vote in his own community.  Within a few days, Congressman Kuykendall announced he would not challenge the election results and would not attempt to regain his seat in the House of Representatives in the 1976 election.

“Tennessee’s Talking Horse” became a lobbyist in Washington and finally retired to returned to live in Germantown.  Kuykendall, a skilled carpenter, enjoyed his family and hobby until his health failed him.  Dan Kuykendall died June 12, 2008.

Harold Ford went on to create a political machine that rivaled that of E. H. Crump, finally relinquishing his congressional seat to his twenty-six year old son.