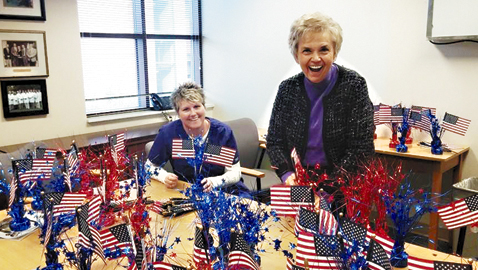 It was a beautiful sight—the entrance lined with American flags blowing in a crisp November breeze.  We followed the flags to the event:  the University General Dentists’ (UGD) 5th Annual Veterans Pancake Breakfast on November 8, 2014.  The breakfast was as tasty as it was colorful.  Those attending received dental products as well as a patriotic poster suitable for framing by local artist Danny Wilson.  Every moment and movement of the packed program honored America’s heroes.  A staff member circulated among the tables and handed out a flag lapel pin or key ring to each guest.

Dr. Joseph Rainey emceed the program.  Dr. Rainey, a retired dentist from Clinton, is on the Faculty Staff at UGD and works on the residency program.  The ceremony included University of Tennessee Medical Center Security Color Guard, Security Officers, and K-9 Officers.  Trooper Knipper played the theme song for each branch of the military on his trumpet as veterans were recognized.  UGD Staff placed a huge wreath at the front of the room to acknowledge soldiers.  Students of Temple Baptist Academy Elementary gave the 300 attendees some heart-warming moments as they emphatically recited “The American’s Creed.”  Both elementary and high school students from Temple sang a medley of favorite patriotic songs.  Though I had briefly met the Academy Director, Rev. Clarence Sexton, I had never heard the students.  I was impressed!

Two well-known speakers I had heard many times before delivered words of gratitude to the veterans and gave all of us much to ponder.  Knox County Mayor Tim Burchett thanked veterans and shared memories of his late father who was a veteran.  Congressman John J. Duncan, Jr. told of a place in the United States Capitol that gets little publicity—the prayer room.  In these times, I would think it would be a most prominent place.  The Congressman reminded the crowd of the inspiring words in the seldom-heard second verse of “The Star-Spangled Banner.”

What a great tradition to celebrate veterans!  Dr. Rainey, Dr. Lee Wilson, Dr. Tim Williams, Dr. Andrew Young, and UGD Residents and Staff are to be commended for their hard work in recognizing that Such honor and recognition seem to go hand in hand with America’s time-honored Thanksgiving holiday.  It gives us pause to count our blessings and remember those who have served our nation so that we may live in freedom.  From the huge flag displayed by the City of Knoxville’s Fire Department to the flag centerpieces that adorned each breakfast table and even the touching tribute of the small flag emblem on the vests worn by the K-9s, every flag we see should be a reminder to all Americans of their veterans and all they have given so that we may give thanks on Thanksgiving Day.