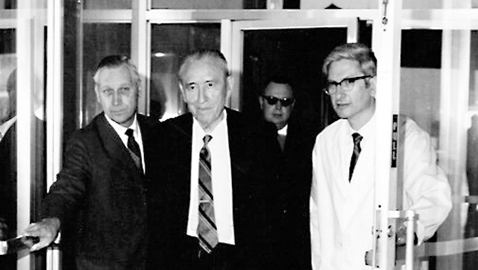 For three decades Gordon Browning had been a force to be reckoned with in Tennessee politics. Following his disastrous attempt to return to the governorship in 1954, Browning was relegated to the status of senior statesman. First elected to Congress in 1922, Gordon Browning left office thirty years later. Browning belonged to another era. E. H. Crump, leader of the Shelby County political machine was dead; Tennessee’s longest serving United States senator, Kenneth McKellar, had been retired by the voters, along with Gordon Browning, in 1952. The decade of the 1950s and 1960s belonged to younger men: Estes Kefauver, Frank Clement, Albert Gore and Howard Baker.

Browning settled into semi-retirement, serving as Chairman of the Board of the Tennessee Valley Life Insurance Company, as well as practicing law occasionally. Yet Gordon Browning never lost his interest in politics. The former governor was pleased when he was recognized by the Southern Governor’s Conference for his “outstanding leadership” in the field of education in the South. Browning had twice been chairman of the Southern Regional Education Board. Browning was awarded a special certificate of recognition by the Southern Governor’s Conference in November of 1959. Gordon Browning’s was a member of an exclusive club – – – that of a former governor of Tennessee – – – and it began to dwindle when Hill McAlister died of lung cancer on October 30, 1959. McAlister had been governor during the worst of the Great Depression. McAlister was also the first governor of Tennessee elected by the powerful combine of Senator K. D. McKellar and E. H. Crump. With McAlister’s passing, Tennessee had four living former governors: Gordon Browning, Prentice Cooper, Jim Nance McCord, and the thirty-nine year old Frank Clement, who had served as governor for six years before leaving office in January of 1959.

Apparently life insurance was considered a fitting occupation for former governors of Tennessee. Jim McCord was president of the Capitol Life Insurance Company and Frank Clement became a founder of the American Educational Life Insurance Company. The fraternity of former governors all kept a healthy interest in the government and politics of Tennessee. Jim Nance McCord had made a spirited bid to win election as governor as an Independent in 1958 against the Democratic nominee, Buford Ellington, despite his seventy-nine years. Prentice Cooper had started his own campaign to win back the governorship that same year, but finally switched to the United States Senate race to challenge Albert Gore. Both Cooper and McCord lost and they, like Gordon Browning, were forced to settle into semi-retirement. The former governors lived like most everyone else; newspaperman Bill Maples wrote he had encountered Frank Clement at a local cafeteria “with a loaded tray and a healthy tan” as the former governor had just finished a stint at National Guard camp. “I was a wonderful field soldier,” Clement laughed. Maples also wrote Gordon Browning had dropped by to see him to talk about nothing more significant than the effort to air condition the auditorium in the War Memorial Building. “They’ll have a hard time air conditioning that one,” Browning said. “It’s a whopper!”

Tennesseans could visit with the four former governors on occasion. All four attended the Fayetteville and Lincoln County fairs in the fall of 1960. Gordon Browning, Prentice Cooper, Jim McCord and Frank Clement were all present as guests at the Andy Largen Hotel for a feast of country cured ham, “half shell potatoes, string beans, salad, spiced peaches and apple pie” in September. Tennessean report Albert Hines recorded both governors McCord and Cooper liked the ham so well they wanted second helpings, but that notion did not meet the approval of their wives, who said no. Governors Browning and Clement had fortuitously left their own spouses at home, so they were able to enjoy third helpings. A downpour of rain dampened the event and Browning’s wife, “Miss Ida”, had reminded him to take his raincoat. Before leaving his home in Jackson, Browning noted the weather had been beautiful and left his raincoat. “She’ll fuss at me for a week when I get home,” Browning murmured. The former governor decided to stay in Fayetteville for a few days.

Mayor Fred Womack offered each of the former governors three minutes to say whatever was on his mind, so each spoke for about ten minutes. Browning recalled he had received a telephone call during his first term as governor from the London Daily Mirror. The governor had been beset with severe flooding along the Mississippi River and thought the reporter was calling about the flood. To Browning’s surprise, the reported had called to ask about a child bride. “I asked the reporter, didn’t he know we had a bad flood in the Mississippi Valley, and the British newsman replied that he didn’t know there was such a thing as a Mississippi.”

Newspaper columnist Elmer Hinton recalled Browning as a “thigh slapper.” Whenever Browning was highly amused, he would laugh and slap his thigh. “Whenever we told something that caused Browning to slap his thigh when he laughed, we knew we had clicked,” Hinton remembered. The former governor was not laughing about his “life-long” friend Andrew “Tip” Taylor running against Senator Estes Kefauver in the Democratic primary in 1960. Browning announced he would back Kefauver. “I never have failed to support Sen. Kefauver, and I don’t see any reason to do otherwise this year,” Browning said. Browning had strongly backed Taylor’s bid to win the gubernatorial nomination in 1958, but had long been associated with Kefauver. Browning had been elected governor in 1948, along with Kefauver who had defeated Senator Tom Stewart for the Democratic nomination that same year. Browning felt Kefauver’s seniority in the Senate was too valuable for Tennesseans to sacrifice. The former governor believed Kefauver was “invaluable” to Tennessee because the senator could protect TVA, the REA and other agencies important to the state. Browning agreed to serve on a committee of Democrats to support Kefauver’s reelection campaign.

Both Senator Kefauver and “Tip” Taylor were expected to join as many as 3,000 residents of Carroll County to honor former governor Gordon Browning in June of 1960. A menu of fried fish and chicken would kick off the festivities that evening for the “appreciation day” for Browning. The Nashville Tennessean published an editorial praising Browning following the tribute from his home folks in Carroll County. Browning had said in his speech that his early life had been difficult, causing him to spend his life in politics to “fight for the things that would make it better for the people.” The Tennessean noted Browning “stuck to that vow.”

Tennessee’s four living former governors were on hand in Nashville when Democratic presidential nominee John F. Kennedy made a campaign appearance. Governor Buford Ellington greeted Kennedy at the Virginia-Tennessee border, along with Congressmen Ross Bass, Joe L. Evins, and J. Carleton Loser. Governor Ellington described Kennedy as “the young champion of the New Frontier – – – a man who will be your next president”, a sentiment shared by Senator Albert Gore who gushed JFK was “the new FDR.” Ellington told Tennesseans, “I predict we’ll put Tennessee back in the Democratic column with one of the greatest majorities in history.” The governor was wrong; Tennessee went for Richard Nixon.

Browning and his fellow former governors all attended the Middle Tennessee Fair in Lawrenceburg to celebrate with the “Over Eighty Club.” The over-eighty crowd rode the merry-go-round and Ferris wheel. The ex-governors made brief speeches and joined the elderly citizens for a picnic lunch held at the National Guard Armory. At eighty-one, only Jim Nance McCord was eligible for membership in the Over-Eighty Club. Quite nearly 100 members of the club participated in the celebration and the oldest member, Mrs. Mary Clark, was a spry ninety-nine.

Gordon Browning was on hand when Senator Lyndon Johnson of Texas, John F. Kennedy’s vice presidential running mate, came to Jackson, Tennessee to campaign. The presidential election gave Browning the opportunity to stump for the Democratic ticket. The former governor was one of six prominent Democrats who began a weeklong campaign across Tennessee on behalf of the Kennedy – Johnson ticket, which included Governor Buford Ellington, Senator Albert Gore, Senator Estes Kefauver, Congressman Joe L. Evins and former governor Jim McCord. Browning and Miss Ida were special guests when Tennessee’s Democratic women gathered together for a luncheon at the Biltmore Motel that fall. Browning kept up his speaking engagements and campaigned with gusto. Speaking in Big Sandy, Tennessee, the former governor thought John F. Kennedy and Lyndon Johnson made a superlative team. “Kennedy, unlike slicky Dick Nixon,” Browning thundered, “is not an artificial actor with lots of makeup on before a television camera.” Browning added, “And Kennedy can make a quick decision. Nixon can’t.” The old orator spoke for forty-five minutes before a crowd of 400 people, who were watching one of the last of the old-time stump speakers campaign.

Tennessee was considered an important battleground state during the 1960 presidential election and Democrats tried hard to return the Volunteer State back in their own column. Tennessee had voted for Dwight D. Eisenhower twice and Democrats were taking nothing for granted. Speaker of the House Sam Rayburn was dispatched to campaign in Tennessee and former governors Gordon Browning and Jim McCord, both of whom had served in Congress with Rayburn, joined the Speaker. Harry Truman was also sent to campaign in Trenton and Jackson, Tennessee. Prentice Cooper joined Browning and McCord for a rally in Pulaski, Tennessee headlined by Rayburn. Likely nothing could have kept Gordon Browning away from Harry Truman’s speech in Trenton, which Congressman Robert “Fats” Everett declared having the former president in his district was the “greatest thing since sliced bread.” Gordon Browning and Governor Buford Ellington greeted Truman at the airport. As Truman stepped out of the private plane ferrying him to Trenton, the former president grinned and said “Howdy” to Browning and Ellington.

Gordon Browning kept campaigning until Election Day. Naturally, the former governor was deeply disappointed when Richard Nixon carried Tennessee. Browning still enjoyed the spotlight and one of the rewards of being out of office was being able to mend fences with old foes. Burgin Dossett, whom Browning had defeated in 1936, was the President of East Tennessee State University. Dossett invited Browning to be the featured speaker at the homecoming dinner in the fall of 1961. Although aging, Browning declared, “I’m not bored with life and I’m not tired of living.” Browning told one audience, “I believe we ought to tackle this matter of living, not as though the world were indebted to us, but as though we were indebted to the world.”

Gordon Browning remained active throughout the decade of the 1960s and suffering from Parkinson’s disease, the former governor began to finally slow down. As with every aging person, Browning suffered from a variety of ailments, which included intestinal problems and cerebral arteriosclerosis. Browning still made public appearances despite his advancing age and infirmities. Browning thoroughly enjoyed himself at the dinner to celebrate the inauguration of Ray Blanton as Tennessee’s governor in 1975. Finally Gordon Browning’s body simply wore out. Taken to the Carroll County Hospital in May of 1976, the former governor grew weaker. Miss Ida stayed by his side constantly and Browning began to slip away. The former governor no longer could respond to his wife or friends when they came to visit. Browning died May 24, 1976 at age eighty-six.

Governor Ray Blanton ordered state flags to be flown at half-mast and issued a statement. “Gordon Browning was a loyal Democrat and a proud Tennessean. He never backed away from a fight he thought needed fighting. He spoke out for progress, and the people of Tennessee gave him their confidence by electing him their governor three times.”

The old warrior could finally rest.