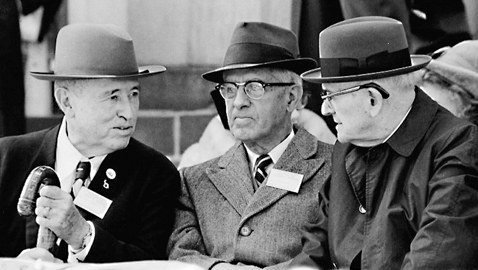 Gordon Browning was a veteran of Tennessee’s turbulent and oftentimes brutal political wars. Browning had unseated a twenty-four year incumbent in his first race for Congress in 1920, although he lost the general election to a Republican. Stubborn to a fault, Browning ran again in 1922 and handily beat Lon Scott, the GOP congressman. Browning remained in Congress for twelve years before his yearning to go to the United States Senate got the better of him. Browning ran against Senator Nathan L. Bachman and began the campaign as the frontrunner, with strong support from his fellow veterans of the World War. Browning lost, but rebounded in 1936 to win election as governor of Tennessee, crushing a primary opponent who had the open support of Tennessee’s powerful senior United States senator, Kenneth D. McKellar. The 1936 Democratic gubernatorial primary saw McKellar and his personal friend and political partner, E. H. Crump, leader of the Shelby County machine, parted ways. Crump, likely believing Browning was going to win in any event, cast his lot with Gordon Browning. Crump’s Shelby County produced a whopping majority for Browning, as expected, but the Memphis Boss’s intuition had been correct; Browning would have won without the totals from Shelby County.

The alliance between Browning and Crump did not last long. A bitter spilt erupted between the two men and brought Crump and McKellar together closer than ever. Senator Bachman had died and Governor Browning appointed labor leader George L. Berry to fill the vacancy in the Senate. Browning declared all out war on the Crump machine and the Memphis Boss and Senator McKellar joined together to eliminate the governor and Senator Berry completely in the 1938 primaries. McKellar and Crump were successful; Browning had been badly beaten by Prentice Cooper and after a defiant burst in his farewell address, quietly returned to practice law in his hometown of Huntingdon, Tennessee. Browning continued to practice law until he received a summons from former governor Tom C. Rye, who was the Chancellor of the Eighth Judicial District. Rye told Browning he intended to retire and urged the younger man to run to succeed him. Browning agreed and was elected without opposition.

Browning desperately wanted to get back into the armed services with the outbreak of World War II, but felt he was being thwarted by Senator McKellar. Eventually, Browning entered the Army at his old rank of Captain and remained in Europe past the 1946 election despite being a candidate for governor. Browning lost to incumbent Jim Nance McCord, but ran again in 1948. McCord was considerably weaker, especially after having introduced the sales tax to Tennessee. Crump had also wounded the machine he and Senator McKellar had used to dominate Volunteer State politics for almost two decades by refusing to support Senator Tom Stewart for reelection. Gordon Browning allied himself with insurgent Congressman Estes Kefauver and both won.

Browning won yet another term as governor in 1950, although there were signs his political strength was ebbing. An obscure state senator from Nashville had run a surprisingly close race inside the Democratic primary. Browning had decided to seek a third consecutive term in 1952 when he was challenged by Frank Clement. The governor was surprised by his defeat. Senator K. D. McKellar lost to Congressman Albert Gore that same year and for the next fifteen years, Clement, Gore and Estes Kefauver would represent a new era in Tennessee politics.

The race between Governor Browning and Frank Clement had been exceedingly bitter. Browning went back to Huntingdon and smoldered. Despite virtually every friend urging him not to run again in 1954, Gordon Browning announced his bid to reclaim the governorship from Clement. Browning was competing for the first four-year term granted a Tennessee governor following the constitutional convention in 1953.

Charismatic, an eloquent stump speaker, and youthful with an attractive family, Frank Clement was a sharp contrast to the sixty-four year old Browning.

Clement’s reelection campaign was lavishly funded, while Browning had difficulty attracting contributions. Still, the former governor campaigned gamely all across the state. If anything, the 1954 campaign was just as bitter. Clement described Browning’s campaign as one of “hate, vilification and vituperation.”

Despite raising questions over a Cadillac delivered to Governor Clement on the day of his inauguration in January of 1953, Browning was thrashed in the primary. Frank Clement carried every county in the state of Tennessee save for Browning’s home county of Carroll. Gordon Browning’s political career of more than thirty years had finally come to an end with jarring finality. The Nashville Tennessean, which had strongly supported Gordon Browning through the years, concluded, the people of Tennessee obviously wanted “fresher faces and younger blood” in 1954. Browning, perhaps realizing his star had set, promised the 1954 gubernatorial campaign would be his last. The magnitude of his defeat ensured that it would indeed be Gordon Browning’s last campaign for public office.

Clearly disappointed, Gordon Browning returned to Huntingdon and worked for several hours in his law office and told a reporter he would spend the weekend resting at his home. After leaving the governor’s office in 1953, Browning had built a new home for his wife, Ida, which was paneled with woods from trees native to Tennessee. Ida Leach Browning was a retiring woman, uncomfortable in the spotlight and she disliked politics. Mrs. Browning was happiest in her home and surrounded by her friends in Carroll County and was clearly contented with retirement. Gordon Browning’s retirement from politics had been forced but he would retain his interest for the rest of his long life. Aside from his law practice, Gordon Browning kept himself busy as the Chairman of the Board of the Tennessee Valley Life Insurance Company.

The former governor supported his friend Estes Kefauver for the Democratic nomination for president in 1956 and campaigned on behalf of the ticket when Kefauver won the vice presidential nomination instead. As the campaign drew to a close, Browning spoke to crowds in Trezevant and Bolivar, Tennessee. Browning was also active in the Democratic primary for governor in 1958. After six years in office, Frank Clement was ineligible to succeed himself as governor of Tennessee. A fierce primary was fought by Buford Ellington, Commissioner of Agriculture under Clement, Edmund Orgill, the former mayor of Memphis, and Judge Andrew “Tip” Taylor of Jackson, Tennessee, who had been elected to a term on the Public Service Commission in 1946. Browning backed Taylor and traveled much of Tennessee on behalf of Judge Taylor. Browning visited Johnson City when Taylor opened his campaign headquarters in May of 1958. Browning was not the only former governor working hard for “Tip” Taylor. In July of 1956, both Gordon Browning and Jim Nance McCord were on hand in Greeneville when Taylor campaigned there. Both former governors made predictions that Taylor would be the next governor of Tennessee. The 1958 Democratic primary was a free for all and the election results were close enough to give many Tennessee Democrats ulcers. Ellington won, but only barely, polling 213,415 votes. “Tip” Taylor was right behind Ellington with 204,629 votes; only a few hundred votes separated Taylor and Edmund Orgill, as the former Memphis mayor won 204,382 votes.

Buford Ellington was hardly the universal choice of Tennessee Democrats and the seventy-nine year old Jim McCord launched a bid for the governorship in the general election as an “Independent.” As both Gordon Browning and Jim McCord had strongly supported Andrew Taylor in the heated 1958 primary campaign, rumors began to circulate one of the two former governors would run in the general election as an Independent. Apparently, Browning and McCord met privately to discuss the idea.

Despite having been opponents during the 1948 campaign, Gordon Browning chose to back McCord’s quixotic bid rather than Ellington. Browning did not hold back, saying, “I’m going to support him every way I can and request all my friends to support him.” When queried if he would actually campaign for Jim McCord, Browning was somewhat more vague. “I don’t know. But I’m in his army and I’ll do anything he wants.”

Former governor Jim Nance McCord, in making his announcement he would run in the fall election, addressed the most obvious burden he carried, his age. “My age, which is no secret, will undoubtedly be discussed during this campaign,” McCord acknowledged. “I am proud of every year I have lived. I feel fully qualified, fully competent – – – both mentally and physically – – – to be of further service to my native state.”

McCord had served as Commissioner of Conservation in the Cabinet of Governor Frank Clement from 1953 – 1958, yet he did not hesitate to criticize Clement’s administration. McCord’s stepdaughter, Christine Reynolds, had been the Commissioner of Welfare under Clement and had joined him in resigning her post to support Andrew “Tip” Taylor for governor.

In a television address to the people of Tennessee, the former governor promised to “tighten the purse strings of the state government to eliminate the great, wanton and willful waste that has crept in during the past six years.” As McCord spoke over television, Gordon Browning was stumping Middle Tennessee for his former rival. Evidently Browning and McCord had put aside their differences and become quite friendly as members of the special fraternity reserved for former governors. Neither man was happy with the backing Ellington had received from Governor Clement. Both Browning and McCord grumbled about Clement having “hand-picked” Ellington, which they believed meant four more years of the Clement administration. Browning spoke at the Fentress County Courthouse in Jamestown and denounced Buford Ellington as “the hatchet man of a corrupt administration” and derided Ellington as the “Crown Prince” of the Clement regime. “We said in the 1953 constitutional convention no governor should control this state for more than four years at a time,” Browning bellowed. “But the present governor is trying to project himself through the gap and control it for four more years.”

“That’s more power than a good governor would want and more than a crooked governor should have,” Browning snapped. “If any state was ever saturated with fraud and deceit and falsification, Tennessee has been for the past six years.”

With Ellington running as the regular nominee, both Gordon Browning and Jim McCord stoutly maintained they were not leaving the Democratic Party. The former governor was obviously enjoying himself and while in Jamestown, lunched with old friends and supporters, who included relatives of the late Secretary of State Cordell Hull. After leaving Jamestown, Browning drove to Pallmall, Tennessee where he enjoyed a visit with Sergeant Alvin York. Browning, along with former Knoxville mayor George Dempster, headlined a five-county rally in Dayton, Tennessee on behalf of Jim McCord’s candidacy. Browning flew from Dayton to Selmer, Tennessee to appear beside McCord at an evening rally.

Browning and McCord were tilting at windmills, as virtually every important Democrat in Tennessee lined up behind the party ticket and Buford Ellington. Congressmen Robert “Fats” Everett and J. Carleton Loser of Nashville dutifully announced they were supporting Ellington, as did Senator Estes Kefauver. Still, Gordon Browning was a stubborn man and he joined McCord in Columbia, Tennessee to kick off the general election campaign. McCord, considered one of the most eloquent speakers in the state, wore a big grin and a bowtie, as he lambasted Buford Ellington. The two former governors were photographed together smiling.

Browning introduced McCord at the McNairy County courthouse in nippy 40-degree weather. “I don’t like Frank Clement,” Browning roared. “I don’t know whether you do or not. I think he’s the biggest crook I ever saw. I don’t like the way he and his pappy have administered the government of Tennessee.” The former governor’s remarks were greeted with applause, laughter and cheers from the crowd.

Gordon Browning kept up a hectic pace during the final days of the campaign, speaking in Camden, Paris and Ripley, Tennessee. Like an old fire-horse sniffing the cinders in the air, Gordon Browning pawed at the ground and took off running.