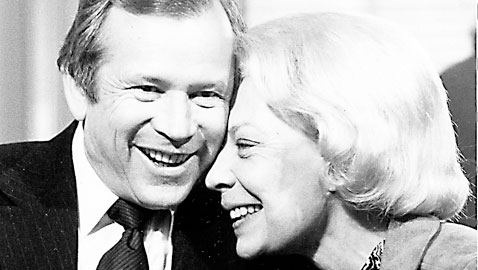 Senator Howard Baker had seen several election cycles diminish Republican gains in 1974 and 1976. Democrats were optimistic about continued success and Speaker of the Tennessee House of Representatives Ned Ray McWherter was asked by President Jimmy Carter and Vice President Walter Mondale to run against the Minority Leader when Baker came up for reelection in 1978. In fact, there were rumors Carter had written McWherter, urging him to make the race.

McWherter did not seem to seriously consider the idea, especially as he had his eyes firmly set on becoming governor. When queried about a possible challenge from McWherter, Senator Baker replied, “I am certain Ned Ray McWherter can make up his own mind about whether to run without being cajoled by the President or vice president.” Baker pointedly added, “And I would remind the President and the vice president that the people of Tennessee have long resented outside intervention in Tennessee politics.” For his part, McWherter privately described Baker as “the most popular, powerful politician in the state.” Carter was uneasy about Baker, who had indicated he might very well run against the President in 1980 and the Tennessean had been giving the chief executive a hard time in the Senate. As early as 1977, Jimmy Carter and his White House staff were certain Howard Baker would be the GOP nominee. Carter liked the idea of removing his competition by defeating Baker, or at the very least, forcing him to wage an expensive and bloody campaign against the popular House Speaker.

Jim Sasser, who had defeated Senator Bill Brock in 1976, confirmed he had been asked about the possibility of McWherter running against Senator Baker by Carter aide Hamilton Jordan. Still, Senator Sasser dismissed the idea of the White House recruiting candidates for the United States Senate.

Senator Baker had already begun to organize his reelection campaign and told reporters, “You should assume that I’ll run for reelection for the Senate.” Asked by a reporter about some fretting on the part of professional staff irritated by a fundraising letter sent out to raise money for the Tennessee Republican Party as he organized his own efforts, Baker replied, “Staff members usually get upset over letters. Nobody else much does.” Senator Baker said his relations with President Jimmy Carter had been “cordial” and denied any responsibility for sinking the nomination of Ted Sorensen, a Kennedy family intimate, to serve as Director of the CIA. Baker claimed he had not gone to the trouble to solicit votes against Sorensen, but did tell President Carter there was growing opposition to Sorensen’s nomination inside the Senate.

It soon became clear Tennessee Democrats intended to do all they could to defeat Howard Baker. Secretary of State Gentry Crowell flatly said, “Howard Baker will have formidable Democratic opposition in November – – – he can count on it.” Crowell was considered a potential candidate himself, a fact he readily acknowledged. “I certainly haven’t ruled it out at this point,” the Secretary of State said. “Howard Baker is certainly vulnerable. He is beatable. He hasn’t represented the people of Tennessee.” Crowell went on to say, “I think I could do a better job than Howard Baker’s doing. At least I’d stay home and tend to business. And if I decide to run against him, I’m going to beat him.”

For all of Crowell’s bluster, Democrats were having a difficult time finding a credible candidate willing to run against Senator Baker. Tennessee Democrats were also beginning to have problems of their own with the administration of Governor Ray Blanton mired in corruption. Republicans discounted Democratic chest thumping and believed with Baker heading the GOP ticket, there was a very good possibility of electing a Republican governor. Some political writers believed the Democrats were worried about Baker’s popularity and hoped the senator would agree not to back a strong GOP contender for governor. If Tennessee Democrats were hoping Baker would only help himself, they were sorely disappointed.

By February of 1978 Democrats were still searching for a candidate while Senator Baker made campaign swings through Knoxville and the Tri-Cities, followed by a trip to Chattanooga. As Senator Baker was beginning his reelection campaign, he was helping to pass the Panama Canal Treaty in the United States Senate. Baker frankly admitted approving the treaty was a “minus” for him politically, but did not believe it would impair any bid for the Republican presidential nomination in 1980.

Baker quickly set out to raise money for his reelection campaign and former Secretary of State Henry Kissinger headlined an event at Opryland Hotel in March of 1978. More than five hundred Republicans paid $250 each to hear Kissinger speak. Kissinger said, “There is enormous moral support to know there are men in Washington who go beyond self-interest to stand for the national interest, and Senator Baker has always been such a man.” Henry Kissinger told the audience his support for Baker was only the second time in his life that he had campaigned for a candidate.

As Baker kept up his appearances around Tennessee and raised money for his reelection bid, one Democrat began testing the waters to take on the veteran senator. Jane Eskind announced she was thinking of running for the United States Senate. “I don’t know of any politician who isn’t vulnerable somewhere, and I think Howard Baker is beatable this year,” she said. Mrs. Eskind was the first Democrat to make a move to run against Senator Baker. Mrs. Eskind said she would begin traveling across the state to discuss her candidacy with party leaders. Eskind said she had been surprised when she received support for the Senate during a straw poll taken during a recent convention of Young Democrats. Mrs. Eskind noted any campaign would need strong financial support especially in “combatting Howard Baker’s presidential fund.” Eskind was also critical of Baker’s vote on the Panama Canal Treaty, saying, “It is obvious that Baker and the citizens of Tennessee differ on the Panama Canal, and people feel that they weren’t represented. I don’t think Baker would have taken the posture he did if he hadn’t been running for president.”

After the disastrous elections of 1974 and 1976, Tennessee Republicans were expectant in 1978. Lamar Alexander was running once again for governor and with Senator Baker on the ticket, Republicans had reason to believe their fortunes would improve. That much was evident when Republicans gathered in Nashville for the annual Statesman’s Dinner. Former senator Bill Brock, now Republican National Chairman, joined Senator Baker, Congressmen John Duncan, Jimmy Quillen, and Robin Beard as well as former governor Winfield Dunn. It was Governor Dunn who brought the enthusiastic crowd of eight hundred Republicans to howling laughter when he said, “I personally owe a great deal to Ray Blanton. He’s made me look damn good.”

In May of 1978, Senator Baker drew his first official challenger for reelection. Bill Bruce, a former state senator from Memphis, announced his candidacy in a series of press conferences across Tennessee. Baker would also have a challenge from the right when Tom Anderson, an ultra conservative publisher, also announced he would run as an Independent in the fall election. Anderson had been affiliated with the 1968 presidential campaign of Alabama governor George Wallace and was the American party’s vice presidential nominee in 1972 and its presidential nominee in 1976. Baker made his own announcement that he was running for reelection on May 21, 1978.

One week later another major political announcement came from the governor’s mansion. Tennessee’s Constitution had been amended and approved by the voters and Ray Blanton became the first governor eligible to seek a second consecutive four-year term. Claiming he knew he could be reelected, Governor Blanton declared he had decided to leave public life, which he confessed was a wrenching personal decision. Irrespective of what Ray Blanton said publicly, it is highly doubtful he believed he could win a second four-year term. The burgeoning scandal of his administration would undermine the candidacies of Tennessee Democrats in the fall.

As the filing deadline closed, nine Democrats filed qualifying petitions to oppose Senator Howard Baker for reelection. None was an especially strong candidate. Then came a bombshell when the Tennessee Election Commission refused to place Howard Baker’s name on the Republican primary ballot. The two Democrats of the three member Election Commission said they believed Senator Baker’s signature on his qualifying petition had been “forged.” The lone Republican on the Election Commission, James Harpster, hurriedly telephoned Senator Baker, who told him that he had personally signed the document “in front of a raft of people.” Fred Thompson, then practicing law in Nashville, angrily said that “appropriate action will be taken” to ensure Howard Baker’s name would be on the ballot. Eventually, Baker’s name was placed on the ballot and the Baker campaign issued campaign buttons bearing his signature.

Jane Eskind emerged as the winner of the Democratic primary and immediately said she would invade traditionally Republican East Tennessee to unseat Senator Baker. “I will start campaigning in the morning in East Tennessee, at all the traditional campaign stops.” Mrs. Eskind, wife of a wealthy stockbroker, was willing to invest family money in her campaign and declared, “For months I have been saying Howard Baker had lost touch with Tennesseans, and the voters have agreed with me.” It was an odd statement for Eskind to make, as Baker has just won his own primary in a landslide. Two weeks after the primaries, Jane Eskind faced the first of several defections from party ranks when attorney Henry Hooker, brother of John Jay Hooker, announced he was supporting Senator Baker.

Governor Ray Blanton created yet another headache for Tennessee Democrats when he declared the polls were wrong in assessing President Jimmy Carter’s dwindling popularity in Tennessee. The governor had been furious with White House staffers when he had been excluded from the presidential limousine when President Carter had visited Tennessee earlier in the year. Blanton’s rage was increased when he learned that senators Howard Baker and Jim Sasser accompanied Carter in the presidential limousine. Blanton said it was readily apparent Carter’s staff was “inept.” The governor, asked by reporters about Lamar Alexander campaign against his administration instead of opponent Jake Butcher brought a snort from Blanton. “Well, just let me give you an example on the positive side,” Blanton sneered. “Bill Brock tried that, and I figure it will do him the same amount of good it did Bill Brock.”

Howard Baker entered the general election as a popular senator, having a significant fundraising advantage over his challenger. Most of Eskind’s campaign financing during the primary came from her own pocket; she secured a bank loan of $250,000 and contributed $100,000 to her senatorial campaign and spent $369,000.

Much of the attention of the general election campaign was focused not on the senatorial race, as few people believed Jane Eskind could beat Howard Baker, but rather on the heated gubernatorial race between Lamar Alexander and Jake Butcher. Eskind tried touting a poll indicating Senator Baker’s approval rating was 48%, with 46% of Tennesseans disapproving of his job performance. Baker calmly replied Mrs. Eskind’s poll was “starkly at variance” with his own campaign’s polling data. Senator Baker also benefitted from his post as Minority Leader and while not a member of the majority party in Congress, Jimmy Carter’s popularity was sinking steadily.

Eskind tried to take advantage of Baker’s support for the Panama Canal Treaty by saying had she been a senator, she would have voted against it. Ed Blank, a Democratic state senator from Columbia who was supporting Baker, caused a minor stir when he produced minutes from a meeting of the Tennessee Democratic Executive Committee showing Eskind had made a motion to support the treaty. A somewhat embarrassed Mrs. Eskind dismissed her actions as a parliamentary maneuver and claimed she was out of the room when the resolution was adopted.

The fall campaign was nearly over and Tennesseans would decide whether to give Howard Baker a third term in the United States Senate.