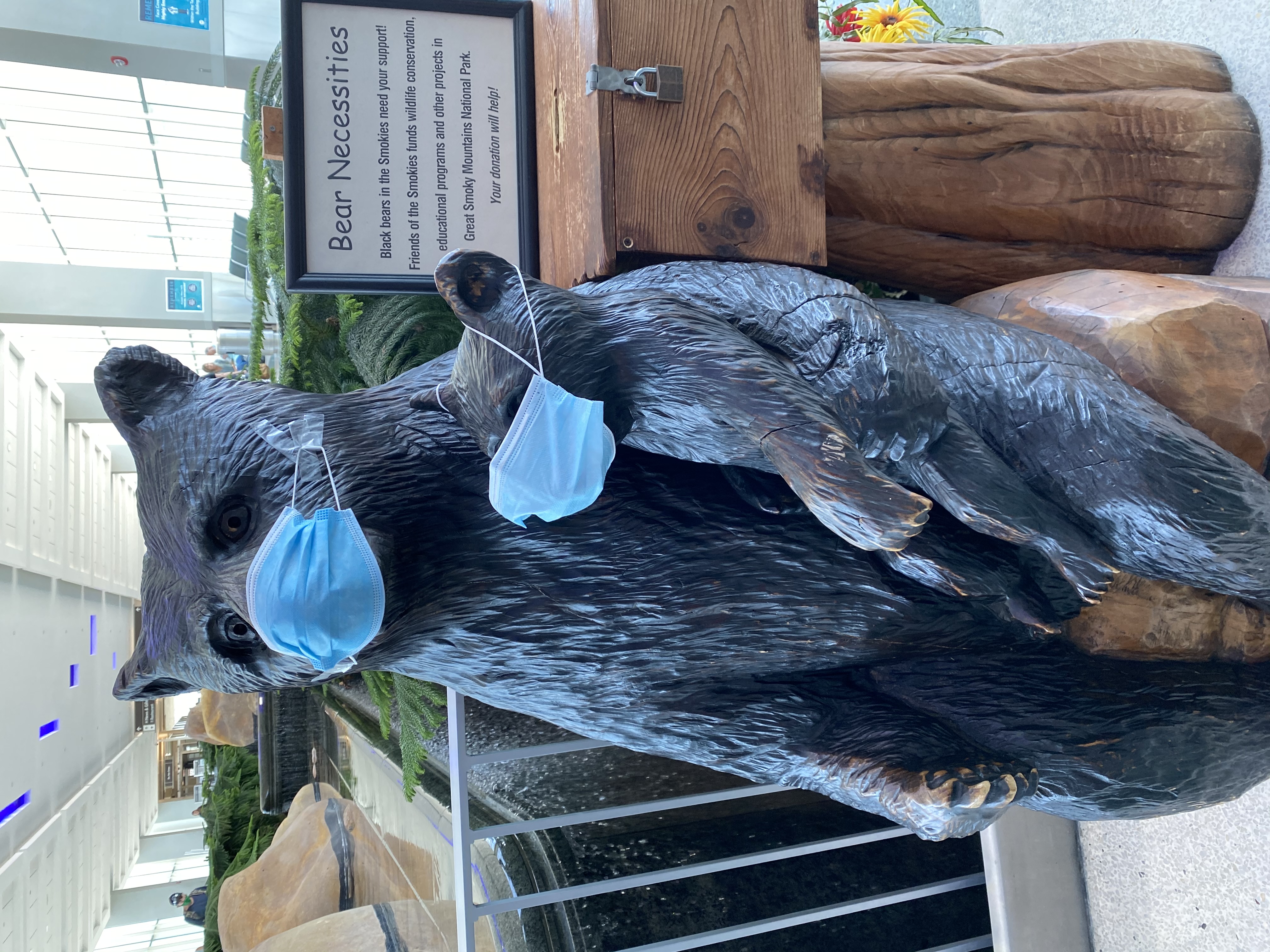 Well, we made it back from the beach without incidence. The only difference I noted in our recent travel was the ubiquitous mask that even our airport’s Smokey bears are forced to wear. Sadly, most of us can now complain, “I can’t breathe.”

I would like to give a shout out to Allegiant airline which ran right on time, using modern aircraft with courteous and professional staff. This no-frills company may be uniquely positioned to survive the orchestrated Covid-19 financial calamity. As we taxied to take off, I counted thirty plus aircraft of other companies parked on the McGhee Tyson tarmac. None were Allegiant.

As we went through the onerous TSA check-in process, I thought to myself, “What good is a photo ID when everyone is wearing a mask?” Nonetheless, all of us, including my five and eight-year-old grandkids, complied principally for the protection of others – masks offer little protection for the wearer, unless you’re using an N95 mask, and then you really can’t breathe.

As a 69-year-old man, my sense of smell, hearing and vision are less acute, but functional. When you get off the airplane, South Florida has a distinctively humid, balmy feel and a swampy beach smell which is faintly sulfurous. Humans detect sulfur dioxide (the rotten egg smell) at lower concentrations than any other chemical. Also, a Caribbean beach has a distinctive susurrus of softly whispering surf. I’ve written about the rhythmic sounds of waves lapping the shore (Rhythms of Life, March 2018).

Being a concierge physician I’m always on-call for my patients. I no longer admit patients to the hospital or make hospital rounds, but I’m available to my patients 24/7 for text, phone, email, Skype or FaceTime consultation. Most of the time people just have concerns, need explanations or reassurance, but occasionally need a round of penicillin. I was doing “telemedicine” before it was cool!

My beach vacation was great, but unusually busy. I managed a patient’s constipation, another’s diabetes worsened by steroids, abdominal pain which turned out to be a leaking abdominal aortic aneurysm in an elderly man, COVID-19 exposure in a patient just out of the hospital for spinal stenosis surgery and a patient with acute urinary retention from an enlarged and inflamed prostate.

Technology can connect me to my patients like never before, yet I hear people complain they cannot reach their doctors for urgent or even routine consultations. And technology at my finger tip affords me a compendium of medical knowledge previously only available in medical libraries.

No longer is there a susurrus of hatred for conservatives and Republicans. Now, there is a howling cacophony of insane hatred. In their raw pursuit of power, Marxists and progressive Democrat socialists march, and media leftists whip the uninformed into a loathing of our country. But we are also to blame. We allowed teachers and academia to indoctrinate and corrupt our children. We buy products from China (never again) and give credence to the rants of vacuous Hollywood and sports stars. We were duped into thinking that Wall Street was occupied by Mainstreet Americans or that Tech Giants might consider fellow citizens alongside the bottom lines of their multi-national globalist corporations.

As we approach the November election, you should expect the hysteria and the dishonesty to worsen. Under the influence of anarchists and BLM, the mobs will continue to demand corporate cowards bend a knee to their tyranny. Our American history and monuments will continue to be disparaged by leftists (different than liberals). Even the statue of the abolitionist Frederick Douglas was attacked by the ill-educated “march of morons.”

The 24/7 multidirectional attack on Trump will increase because he is “the only person who stands between the American people and the mob.” You might ask your “White Guilt” (Shelby Steele’s book) ridden liberal friends how they expect the Democrat Party and mob to “lead a country they hate.” Poor ole Joe won’t be able to control the leftist AOC mob who now controls the Democrat party. If elected he’ll be nothing but a figurehead. He’s already a victim of other people’s political designs, tantamount to elder abuse.

At this moment I still have the freedom to express my opinion and a bully pulpit. I suspect the leftists who are intolerant of free speech, espouse open borders, demand socialism and see class warfare in all aspects of life may eventually come for me, but they haven’t yet. If my column goes away before November you’ll know why.

For me an especially influential biblical passage comes from 2 Timothy 4:7. The author was Paul who was under house arrest while awaiting trial by the Roman Emperor, Nero. Paul didn’t expect things to go well and he spent the time training his protege Timothy to take over the Christian movement when he was gone. I’ve changed Paul’s scriptural verb tense to a future tense for my mantra. Paraphrasing, “I will fight the good fight, I will finish the race, I will keep the faith.”

My partner in life and wonderful wife, Becky, and I have a new mission project and a challenge for you. We have jointly developed our 20/20 Project as our effort to PUSH BACK against the darkness sweeping our country. We won’t be marching, burning, looting, desecrating monuments or mouthing obscenities on TV. As conservatives we believe in the rule of law, our representative republic and the freedom of speech. We will publish our challenge in my column next week. The Project will list simple actionable items which will enable you to make a difference. It is what we’re doing for God, country and those we love and serve. And, we need your help.

The revered 19th century British statesman Lord Acton once said, “The only thing necessary for the triumph of evil is for good men to do nothing.”

Becky and I will not remain silent. Stand together with us in the breach and help Make America Great Again!