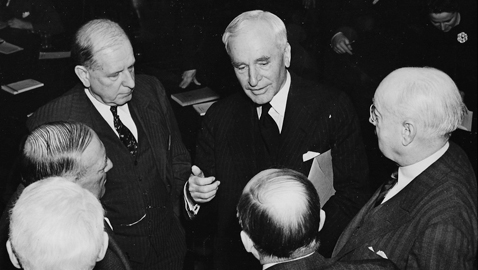 Attempting to purge senators from his own party proved to be President Franklin Roosevelt’s folly. It was certainly true FDR remained the most popular Democrat in the country and he believed the voters would heed his call to eject those Democratic senators whom he targeted as obstructionists. Among those marked for defeat by President Roosevelt were several senatorial barons, including Walter F. George of Georgia and Millard Tydings of Maryland. FDR also wished to see E. D. “Cotton Ed” Smith of South Carolina, Frederick Van Nuys of Indiana, and Guy Gillette of Iowa beaten.

The President personally campaigned for challengers to Senators George and Tydings. While traveling through South Carolina, Roosevelt made an ill-concealed jab at Cotton Ed Smith. FDR allowed his Secretary of Commerce, Harry Hopkins, to bear most of the burden in the battle to defeat Senator Guy Gillette. Hopkins, although originally from Iowa, had not lived in the state for decades, knew virtually nothing about the intricacies of Hawkeye State politics, nor did he have any kind of political base of his own.

Hopkins was a creation of Roosevelt and entirely dependent upon the President for political power. Hopkins backed Congressman Otha Wearin against Guy Gillette in the Democratic primary. Gillette was an able speaker, personally popular with tens of thousands of Iowans and was quite likely the one senator in the United States Senate who looked most like Hollywood’s version of a senator. Senator Gillette easily dispatched Otha Wearin in the primary.

The defeat of Senator Frederick Van Nuys was to be accomplished by the political machine headed by former governor Paul V. McNutt. Governor Clifford Townsend read Van Nuys out of the party and the machine was certainly powerful enough to deny the Democratic nomination to Van Nuys. Senator Van Nuys was a small, bespectacled little man with a fondness for cigarettes. While Van Nuys might look like a small town tax lawyer with a cigarette firmly grasped between his fingers, he refused to be cowed and proved to know a thing or two about politics himself. Senator Van Nuys promptly kicked off a campaign inviting 100,000 Hoosiers to support him and announced if he were denied the Democratic nomination, he would run in the general election as an Independent. Some Indiana Republicans said the senator should leave the Democrats and run under the GOP banner. The state machine was thunderstruck, quickly realizing Senator Van Nuys was not about to go quietly into the night; the machine also knew if Van Nuys carried out his threat to run as an Independent, it would mean a Republican would win his Senate seat. The machine abruptly dropped its plan to replace Fred Van Nuys and amid a love fest at the Democratic state convention, he was renominated.

Senator Walter F. George beat two opponents and Roosevelt’s preferred candidate ran last. Senator Millard Tydings crushed Congressman Davey Lewis who had the all-out backing of the Roosevelt administration. Cotton Ed Smith beat the sitting governor to win the Democratic nomination, winning by a wide margin. The purge had been an abject failure and as if that were that not bad enough, the Republicans won seventy-two seats in the House of Representatives from the Democrats and seven in the Senate. A congressional coalition of Republicans and conservative Democrats faced President Roosevelt in 1939. A story oftentimes attributed to either Cotton Ed Smith or Walter George, which may well be apocryphal, had one senator lamenting FDR was his own worst enemy. George or Cotton Ed Smith, depending on the story, was supposed to have snarled, “Not while I am alive, he isn’t!” It summarized the challenge faced by President Roosevelt and his administration.

The slackening of Roosevelt’s influence with Congress required the help of Cordell Hull. The Secretary of State became a pivotal factor as the battle to repeal the arms embargo and keep the cash and carry provision from lapsing took shape. The President wisely allowed the proposals to become those of Cordell Hull. Roosevelt knew better than anyone that the Tennessean’s prestige with Congress exceeded his own. The respect for Hull, as well as the large number of Americans who believed the Secretary of State was doing a good job quite likely surpassed that of Roosevelt as well. Almost as many Republicans rated Hull’s performance as Secretary of State as highly as did Democrats, a feat that was impossible for Roosevelt.

President Franklin Roosevelt’s success in having the cash and carry provision added to the Neutrality Act of 1937 needed to be renewed in 1939 or lapse. With war looming in Europe and already raging in Asia, the President wanted to see the arms embargo lifted. To help accomplish that end, Franklin Roosevelt needed Cordell Hull. The Tennessean charged in April of 1939 the present Neutrality Act allowed Japan to accumulate a large supply of American materials, which aided the Japanese Empire to prosecute her war with China. The Secretary of State’s comments spurred further discussion in Congress for the need to revise the neutrality laws. Congressman Louis Ludlow of Indiana had revived his effort to approve a Constitutional amendment requiring a national referendum before war could be declared against any nation. Ludlow’s bill continued to languish in the House Judiciary Committee, although it had only narrowly failed to pass the full House of Representatives the previous year.

Both President Roosevelt and Secretary of State Hull had vehemently opposed the Ludlow amendment for the obvious reason it would cripple the government’s ability to handle foreign affairs. Just days later Italian troops invaded the little kingdom of Albania. Hull telephoned Roosevelt who was vacationing at his home in Warm Springs, Georgia. Following the telephone conference, Hull held a special press conference and told reporters the Italian invasion was “unquestionably a threat to the peace of the world.” As Italian troops poured into Albania, members of the Senate Appropriations Committee, of which Tennessee’s senior U. S. senator K. D. McKellar was the ranking member, heard the astonishing news Germany had “the best aircraft in the world”. The Appropriations Committee had provided funds for the purchase of new airplanes and being told those aircraft would be second to those of Germany was not especially good news.

The hostility of the isolationist bloc ion Congress was demonstrated by a speech made by Senator William Borah, who denounced efforts to alter the existing neutrality laws as Mussolini’s troops occupied Albania. “It seems proponents of these measures want us to become the moral censors of the world,” Borah cried, “decide which nation or nations is in the wrong in case of war and then punish the one or ones we decide to be wrong. If this nation wants to get involved in war, I can think of no better way than to adopt this aggressor policy.” Borah warned, “The next step in the program is for this nation to open up an economic war upon the aggressor nations. We seek to break down its economic strength, to starve its people, and to render it incapable of carrying on war. We take part at once in this economic war.”

Secretary of State Cordell Hull was to be the star witness as the Senate Foreign Relations Committee opened hearings on revising the neutrality laws. Congressman Sol Bloom was serving as Acting Chairman of the House Foreign Affairs Committee as Tennessee’s Sam D. McReynolds was ailing. Bloom, too, would open hearings and announced the Secretary of State would be called to testify.

Senator Key Pittman, Chairman of the Senate Foreign Relations Committee, was carrying a bill to eliminate the embargo on selling arms to belligerent nations, as well as to renew the cash and carry provision, which Congress had reluctantly agreed to at the insistence of President Roosevelt. While there were several bills pending to revamp the neutrality laws, the Pittman bill seemed the best vehicle for the Roosevelt administration to support. The Pittman bill seemed to attract support not only from those senators who usually backed the Roosevelt administration, but from some powerful conservatives as well. Hull’s inherent caution and tendency to dither before making a decision helped to undermine the administration’s strength in the Senate.

While Hull waited to appear before congressional committees and tried to make up his mind which bill offered the best results for the administration, Massachusetts Congressman George Holden Tinkham sponsored a resolution stating the foreign policy of President Roosevelt and the Secretary of State “is leading the United States inevitably to war if and when war comes to Europe.” Congressman Tinkham’s resolution urged Congress to “reassert its conviction that the only policy by which the United States can avoid war is the traditional American policy of genuine neutrality.”

There was an impediment to Hull’s appearing before the Senate Foreign Relations Committee; that was the insistence of its chairman that the Secretary of State appear before an opening hearing. Hull’s appearance before the House Foreign Affairs Committee was to be held in executive session, meaning closed to the public and the press.

As Hull waited, newspapers began to editorialize. The Wilmington News Journal wrote, “Secretary Hull can do the public a useful service by accepting the invitation of the House Committee on Foreign Affairs to appear before it and explain the position of the Administration with respect to neutrality laws.”

The News Journal noted, “Among the members of the Cabinet none enjoys a higher popular respect than does Cordell Hull.” Moreover, the American people “has confidence in his judgment” due to his restraint in addressing the growing crisis in Europe. Of the twenty or so neutrality bills pending before the Congress, the News Journal believed the Secretary of State could eliminate some of the confusion by promoting the bill that would best serve the overall interests of the country. The News Journal complained Hull’s views were “not known” to either the public or Congress and President Roosevelt “has kept the people pretty much in the dark,” although most observers thought FDR was in favor of the neutrality bill sponsored by Senator Key Pittman.

On May 28, 1939, Secretary of State Cordell Hull finally unveiled his position. Hull asked Congress to repeal the current neutrality law’s provision for an embargo on the shipment of arms to belligerent countries. Hull wrote letters to the Chairmen of the House Foreign Affairs Committee and the Senate Foreign Relations Committee and outlined six points for suggested legislation which the Secretary of State believed would “help to keep this country out of war.” Hull wanted to curtail travel by American citizens in combat zones’ to prohibit American ships, irrespective of whatever cargo they might be carrying, from wandering into combat zones; to renew the cash and carry provision of the neutrality law, as well as keeping laws on the books with respect to the loans and credits available to belligerent countries; to regulate “the solicitation and collection in this country of funds for belligerents”; to keep in place the National Munitions Control Board, as well as the existing system of arms export and import licenses.

Hull wrote Key Pittman and Sol Bloom he believed if Congress would adopt the measures he suggested it “would make easier our two-fold task of keeping this country at peace and avoiding imposition of unnecessary and abnormal burdens upon our citizens.” Hull had already talked to several members of both the House and Senate committees and Chairman Sol Bloom confessed a bill had already been drafted that incorporated all of the Secretary of State’s suggestions.

Cordell Hull had outlined the parameters of the debate before Congress and the isolationists were prepared to meet the challenge.