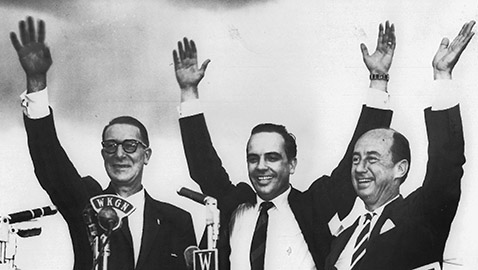 The 1956 Presidential Election in Tennessee

Dwight D. Eisenhower had carried Tennessee in the 1952 election, albeit it only barely, with the final totals being 446,147 for “Ike” and 443,710 for Democratic nominee Adlai Stevenson. It was a difference of 2,437 votes. The 1956 presidential election saw a rematch between Eisenhower and Stevenson. Tennessee was considered to be something less of a battleground state as Stevenson had allowed the Democratic National Convention to select his running mate without any interference from him. A host of prospective vice presidents had jumped at the chance, including Senator Hubert Humphrey of Minnesota and Senate Majority Leader Lyndon Johnson of Texas.

The Volunteer State found itself with an abundance of political talent with no less than three vice presidential hopefuls: Governor Frank Clement and Senators Estes Kefauver and Albert Gore. Clement had been the keynote speaker and as an orator of considerable ability and note, great things were expected from the governor. Clement, a wonderful speaker on the hustings, did not come across nearly so well on the relatively new medium of television. Governor Clement’s speech was not a success. That left Senators Kefauver and Gore who fought for the honor as a young colleague from Massachusetts began to rise in the vote totals: John Fitzgerald Kennedy. Amon Evans was publisher of the Nashville Tennessean, the voice of liberal Democratic politics in the state, since the death of his father, Silliman, the previous year. The younger Evans, believing Gore’s continued candidacy might make it possible for Kennedy to overtake Kefauver, sought out Tennessee’s junior United States senator and reportedly demanded that he withdraw and throw his support to his colleague. Evans reportedly told Gore he would oppose the senator in the future if he did not withdraw. For whatever reason, Gore saw the handwriting on the wall and the break caused a stampede for Estes Kefauver who finally won the vice presidential nomination. Few Tennessee Democrats believed the Volunteer State would abandon its native son in the general election and confidently believed the Stevenson – Kefauver ticket would carry the Volunteer State in the general election.

Yet the Republicans had hardly given up the ghost as in past elections. Most believed the personal popularity of President Eisenhower gave the GOP an even chance to win Tennessee. As had been the case for the better part of two decades, the Tennessee Republican Party was dominated by Carroll Reece, a congressman from the First District, and his supporters. Reece had been the Southern manager for Ohio U. S. senator Robert Taft during the 1952 Republican National Convention. Having served as chairman of the Republican National Committee, Reece had a plethora of contacts across the country and likely knew more Republicans in Tennessee on a first name basis than any other single individual. Yet Eisenhower had carried Tennessee by winning more than merely the usual Republican vote in the Volunteer State. The 1952 election saw the first real movement of white middle-class suburban voters begin to move toward the Republican Party in Tennessee. Some of those who had joined the Republican Party in the state because of “Ike” did not relish the domination of Congressman Reece. A struggle between Reece and West Tennessee Tennesseans who had cut their political teeth as members of Citizens for Eisenhower sought to take over federal patronage in the area. In 1953, a committee of three Reece supporters and three members chosen by the Citizens for Eisenhower group was proposed to select those who would fill federal jobs and appointments in West Tennessee. As might be imagined, that proposal was one which Carroll Reece did not much care for and the wily congressman gave his opponents a lesson in practical politics. Daniel Taber of New York was the chairman of the powerful House Ways and Means Committee and was opposed to President Eisenhower’s proposal to extend the excise tax. Taber proposed to hold the president’s bill in his committee without acting upon it. The Eisenhower administration was one vote short on the Rules Committee to discharge the bill from the Ways and Means Committee to the House floor. Eisenhower called Carroll Reece, who was a member of the Rules Committee and asked the Tennessean to change his vote. Reece did and the members of the Citizens for Eisenhower organization were stunned to find the President had restored full control of federal patronage in Tennessee to the congressman from the First District.

Almost four years to the day Richard Nixon had come to Nashville to campaign in 1952, he returned in 1956. There was one big difference; now Nixon was Vice President of the United States. He would be greeted at the Nashville airport by 3,000 well-wishers, who ignored sleep and had been gathering at the airport terminal since well before 10:00 p.m. By the time the plane carrying the vice president and Mrs. Nixon taxied down the runway to a specially protected area, the terminal building was “bursting at the seams” according to a Nashville Banner report.

James Stahlman, publisher of the Banner, joined Congressmen Carroll Reece and Howard Baker, and Guy Smith, editor of the Knoxville Journal and campaign manager for the Eisenhower-Nixon ticket, to be on hand to greet Vice President and Mrs. Nixon. A motorcade took the Nixons to the Hermitage Hotel where they spent the night. The next morning, Jim Stahlman hosted a breakfast for Richard and Pat Nixon and the newsmen traveling with the vice presidential party covering the campaign. The publisher warned the Republicans could not win on a campaign of “sweetness and light.” Instead, Stahlman recommended the GOP campaign be waged with “sledgehammer blows” while stressing the fact Eisenhower had brought “peace, progress and prosperity” to the country. “President Eisenhower’s popularity is greater today than it was in 1952 or at any other time,” Congressman Carroll Reece agreed.

Publisher Jim Stahlman made the introduction of Vice President Richard Nixon in the auditorium of the War Memorial Building which was filled to capacity and overflowing. An appreciative Nixon said Stahlman’s introduction was “the most rip-snortin’ and best introduction I ever had.” The vice president said he had traveled to 32 foreign countries and one observation he had come away with was President Eisenhower was “the most revered and respected man in the world.”

“Don’t settle for second best when you already have the best in Dwight D. Eisenhower!” Nixon cried. As Nixon closed his speech, he alluded to the prosperity theme and brought gales of laughter from the crowd when he said, “America doesn’t want warmed over Truman hash when they can get Eisenhower beef and potatoes.”

Nixon paid special tribute to the scores of youngsters waving campaign signs and said, “If this tremendous support is an indication of the feeling in Tennessee, President Eisenhower will carry the state again in November just as he did in 1952.” Richard Nixon summarized the choice of the voters as he saw it; they could “go forward with Eisenhower or back to the policies of the Truman regime.”

Tennessee Democrats rallied around their own ticket. Former United States Senator Kenneth D. McKellar had not been a warm admirer of Estes Kefauver when they had served together; quite the contrary. Yet McKellar was a Democrat and he contributed $200 to the Stevenson- Kefauver campaign. In today’s dollars, that would have the buying power of more than $2,000. The eighty-seven-year-old former senator had been named as a delegate at-large to the Democratic National Convention in 1956 and although a plane was put at the crusty political warrior’s disposal, McKellar’s physician thought it better for him to remain in his hotel apartment. Very reluctantly, McKellar followed the advice of his doctor. McKellar had been one of the first to congratulate Governor Frank Clement on being named keynote speaker for the Democratic National Convention. “It sure is good news for both the governor and for Tennessee generally,” McKellar said. “It’s a fine compliment for the governor to be selected and I am sure he’ll do a great job.”

According to the Nashville Tennessean, Knoxville became “the political capital of the South” when Adlai Stevenson and Estes Kefauver arrived. Democrats from 11 states dutifully filled “special buses” to join a 100-car motorcade to McGhee Tyson Airport to welcome the Democratic Party’s standard bearers. As Democrats arrived in Knoxville, they were escorted to the Andrew Johnson Hotel by uniformed state troopers. Herbert S. “Hub” Walters of Morristown and Democratic Party state chairman, thought it was “a historic occasion for Tennessee.” Walters pledged both he and Governor Frank Clement intended to return Tennessee to the Democratic column in November. Agriculture Commissioner and future Governor Buford Ellington said, “Neither Stevenson nor Kefauver should have a moment’s concern about the South’s vote this fall.” Ellington said when the election was over, Democrats intended to “spell out to the nation that the South is solidly Democratic once again.”

Willard Yarborough, a reporter for the Knoxville News-Sentinel and sometime member of the Knox County Quarterly Court (the forerunner of the county commission), covered the “unity session” hosted by the Democratic nominees. Yarborough noted in his article “some great Southerner” had once insisted during the dark days of Reconstruction “the South will rise again!” Although Stevenson was from Illinois, Yarborough pointed to Estes Kefauver as a “candidate from our own down-South Tennessee” as the two ticket mates conferred with Democratic leaders from ten states in Knoxville.

“Adlai Stevenson and Estes Kefauver would have risen to sing ‘Dixie’ had someone struck up the band,” Yarborough wrote. Although from the Land of Lincoln, Willard Yarborough polished his prose and noted the former governor “looked the part of Jeff Davis” and better still apparently, “talked like one.” The meeting was held in Confederate Hall. Kefauver assured those assembled if Adlai Stevenson were elected president, he would guarantee the “South returns to its place in the sun.” Stevenson, admired for his wit by his supporters, was even telling southern jokes. “Dick Russell of Georgia (U. S. senator) told me about a Georgia scarecrow,” Stevenson told his fellow Democrats. “This one was so good it not only scared all the crows away, but the crows returned all the corn they had stolen the year before.”

Alabama’s governor “Big Jim” Folsom was present and the Democrats gathered together insisted he get up and speak. Likely they didn’t have to ask more than once. Folsom grabbed the microphone and thundered, “Down in ‘Bama when the wolf packs get after our sheep we get our guns… and aim for the leader of the pack.”

Adlai Stevenson had warm words of praise for Governor Frank Clement, who played host to the visitors and led the pep rally for Democrats. Senator Albert Gore, doubtless recovered from his cussing by Amon Evans, was there. Gore, according to Governor Clement, was “one of the jewels” of the Democratic Party. Senator Gore told the audience he expected to give all his time from September until the November election to working on behalf of the party’s ticket.

It was mighty hot that August as Senator Kefauver discovered while in Anderson County. The senator was wearing no undershirt and kept removing his suit jacket to cool off a bit. By the time Kefauver returned to the Andrew Johnson Hotel his shirt was soaking wet with perspiration and it was too late to shop for another dress shirt size 17 and a half with a 35-inch sleeve. The homespun Kefauver, whom no less than Lyndon Johnson once dubbed “the greatest campaigner of them all,” simply took off his shirt and placed it on the air conditioning unit inside his hotel room to dry it off. Once dry, the senator donned the shirt once again and campaigned throughout the evening.

The Knoxville meeting left Democrats, especially those in Tennessee, feeling mighty good. Governor Clement grinned and predicted a victory for his party by a “pretty big” margin. Yet the Republicans felt they had yet another opportunity to win in the Volunteer State, Democratic optimism notwithstanding.