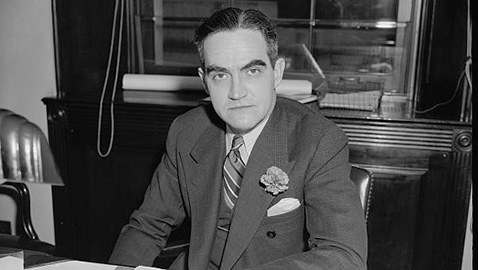 Congressman Joseph W. Byrns, Jr. had first been elected in 1938 and as befitting Tennessee’s “Hermitage District,” so-called because it contained the home of General Andrew Jackson, was solidly Democratic.  Byrns was being challenged for the Democratic nomination in 1940 by his predecessor in Congress, Richard M. Atkinson and W. D. “Pete” Hudson, a prosperous farmer/businessman from Clarksville, who had served five two-year terms as mayor of Clarksville, Tennessee and had won a statewide election in 1938 to Tennessee’s Railroad & Utilities Commission, the forerunner of the Public Service Commission.  A third candidate, M. S. “Monty” Ross, was also seeking the Democratic nomination for Congress in the Fifth District, but was not a serious candidate.

Atkinson, a former District Attorney General for Davidson County, was a seasoned campaigner, although something of a polarizing figure.  The former congressman while campaigning in Hudson’s home of Montgomery County, hit the Utilities Commissioner hard.  Atkinson scolded Hudson for not rebating the two cents saved per gallon of gasoline back to the consumer, as well as operating barges on the Cumberland River in direct competition with businesses regulated by the Tennessee Railroad & Utilities Commission.

Congressman Joe Byrns, Jr. had shrewdly been able to remain above the political fray by virtue of his service on the House Military Affairs Committee.  Byrns had been inspecting the country’s defenses along the Atlantic seaboard and the Panama Canal Zone.  The incumbent had reaped considerable favorable publicity from Tennessee newspapers anxious to cover his activities as the beginnings of the Second World War raged in Europe.  With the Democratic primary in the first week of August, Joe Byrns, Jr. had not returned to his district to campaign; rather the thirty-seven year-old congressman was remaining in Washington in keeping with his 1938 campaign pledge to remain “on the job.”  The Byrns campaign released a speech by the congressman during the last days of July.

Byrns opened his speech by reminding his listeners of his campaign promise of 1938.  “A little less than two years ago, I promised you that I would stay on the job.  It is because I am keeping my pledge to you that I am resorting to the marvelous facilities of the radio rather than being privileged to see and speak to you in person.”

The radio address by the congressman would constitute the only campaign activity by Joe Byrns, Jr. during the Democratic primary of 1940.  Evidently it was enough.  The advantages of incumbency and remaining “on the job” proved to be an effective strategy.  Congressman Byrns won Davidson County by 1313 votes over Richard Atkinson with Pete Hudson trailing well behind.  Hudson did carry his own Montgomery County by 633 votes over the combined total of Byrns and Atkinson.  Congressman Byrns also carried Robertson, Stewart, and Sumner counties.  Pete Hudson narrowly edged out Byrns to win Macon County by a meager 37 votes.  Dick Atkinson carried only one county inside Tennessee’s Hermitage District; the former congressman won Trousdale County by 20 votes over Joe Byrns, Jr.

Richard Atkinson’s loss to Joe Byrns, Jr. in 1940 signaled the end of his political career.  For the remainder of his life, Dick Atkinson would practice law in Davidson County.  The former congressman died of a heart attack in his Nashville home.  Atkinson was only fifty-three years old at the time of his death.  The Tennessean published an editorial eulogizing Atkinson’s time as District Attorney General, recalling “he prosecuted law-breakers vigorously and obtained many notable convictions.”  The editorial reminded readers of Atkinson’s “genial yet energetic disposition” and recalled the former congressman’s service to his church and community.

D. “Pete” Hudson resigned from the Tennessee Public Service Commission in 1942 to serve with the U. S. Army Transportation Corps during World War II. Hudson had risen to the rank of Captain during the First World War and was discharged from the Second World War with the rank of Lieutenant Colonel. Hudson was the statewide campaign manager for U. S. senator Tom Stewart’s losing 1948 campaign.  Pete Hudson was appointed to serve as Montgomery County’s Criminal Court judge by Governor Gordon Browning in 1951, a post he held for a decade.  Hudson died of a heart attack at his home in 1963 at age 72.

Both Richard Atkinson and W. D. Hudson sent telegrams to Congressman Byrns, conceding defeat and promising to support the Democratic nominee in the general election.  It is quite certain virtually everybody considered Joe Byrns, Jr. to have been reelected to a second term in Congress.  As thoroughly Democratic as the Fifth Congressional district was, it was unthinkable a duly nominated Democratic nominee could lose the general election.  History was about to be made in Tennessee’s Hermitage District.

On September 10, 1940 J. Percy Priest, a member of the Nashville Tennessean’s editorial staff, announced he was running for Congress from Tennessee’s Fifth Congressional district as an Independent.  Priest was once described as “being as ugly as homemade sin” yet having the sweetest disposition and a big heart.  Whatever his exterior, it masked a shrewd political mind.  The notion an Independent candidate could defeat the Democratic nominee inside Andrew Jackson’s home district seemed an impossibility.  Priest immediately said the reason he was running was because Joe Byrns, Jr. had broken faith with the people he represented by supporting an amendment to the conscription bill sponsored by Republican Hamilton Fish of New York.  A notorious isolationist who had fought bravely during the First World War, Hamilton Fish was the congressman from President Roosevelt’s home district.  In his announcement of his candidacy, Percy Priest said as Congressman Byrns had betrayed the Democrats of the Fifth Congressional district, they should not feel obligated to support the Democratic nominee.  “There are two parties to every agreement and when one party to a pact breaks faith it no longer can be binding upon either,” Priest reasoned.  Percy Priest said he found it shocking the congressman from Andrew Jackson’s home district would conspire with a group of Republican obstructionists with regard to the preparedness program supported by President Roosevelt and Secretary of State Cordell Hull.  “People who know me in this district will never question my loyalty to President Roosevelt nor to the principles of the Democratic party,” Priest declared.

One sign that Percy Priest’s candidacy should be taken seriously by Congressman Byrns and Tennessee’s Democratic Party was the front page editorial appearing in the Clarksville Leaf-Chronicle entitled “Democracy At Its Best” hailing the “overwhelming ‘draft’ movement” in Montgomery County in support of Priest.  The Leaf-Chronicle flatly accused the congressman of having “misled and deceived” the people of the Fifth District.  The Leaf-Chronicle believed Joe Byrns, Jr. had been renominated “because the people believed he was committed irrevocably to national defense and to national defense legislation.”  Unfortunately, the Leaf-Chronicle lamented, “His record has shown otherwise.”  That fact alone meant Democrats in Tennessee’s solidly Democratic Hermitage District were no longer obligated to support the Democratic nominee for Congress, the Leaf-Chronicle informed its readers.  The Leaf-Chronicle had supported native son W. D. Hudson in the primary and patted itself on the back for having been “the medium” through which the people living in the Fifth Congressional district “first voiced disappointment in the incumbent’s record and first rebuked him for his defense stand.”  The Leaf-Chronicle said it was delighted to support Priest for “it knows it is supporting a man who will never let his people down.”

The fact Joe Byrns, Jr. was the only Democrat in the Tennessee Congressional delegation to openly oppose conscription gave the young congressman little political cover.  “The idea of conscription in times of peace is undemocratic, un-American and unnecessary,” Byrns said.  By way of contrast, Albert Gore, the congressman from the neighboring Fourth District, said, “We have too much at stake and our liberty is too precious to reply on Hitler’s statement that he has no intention of coming to the Western hemisphere.”  Congressman Gore pointed out Hitler had said much the same thing before and “has lied like a cur and curdled it with the blood of innocent people whose sole offense was that they loved peace and stood in his way.”  Gore concluded, “If we are adequately prepared to defend ourselves and our outposts in this hemisphere, we will probably not be required to do so.”

The Clarksville Leaf-Chronicle certainly had been horrified by the stand taken by Congressman Joseph W. Byrns, Jr. and had urged him to change his mind and support the conscription bill.  The Leaf-Chronicle had also been the first publication inside the Fifth Congressional district to urge J. Percy Priest be drafted to run for Congress.  The fact Byrns had joined Tennessee’s two Republican members of Congress, Carroll Reece and John J. Jennings, in voting for the Fish amendment only served to infuriate more Democrats.  The Tennessean, then Percy Priest’s employer, ran a news story that the Leaf-Chronicle wanted an opponent for Byrns.

Ultimately, Joe Byrns, perhaps in response to the reaction of his earlier stand inside his congressional district, voted for the final version of the conscription bill, but it did him little good politically.  Joe Hatcher, not an unbiased source to say the least and the political columnist for the Nashville Tennessean, wrote in his daily column the reason Byrns was given little credit for changing his vote was because it was abhorrent to many of his constituents that he had sided with isolationist Republicans on the Fish amendment.  Hatcher said the idea of a Priest candidacy, the Tennessean’s “roving reporter”, was the subject of much enthusiasm in both Nashville and Clarksville.  Hatcher speculated one reason Joe Byrns, Jr. had voted for the delay of conscription as required by the Fish amendment was to avoid opposition from a Republican or “Willkie” (Wendell Willkie was the GOP presidential nominee in 1940) candidate.  Considering the likelihood of success for a Republican in Tennessee’s Hermitage District, much less a candidate tied to the opponent to the highly popular FDR, Joe Hatcher had to be advancing a theory designed to aid the Priest campaign as it was little less than preposterous.

One Nashvillian expressed his sense of hurt in a letter to the editor of the Tennessean, writing, “Just before the recent primary election” Congressman Joseph W. Byrns, Jr. “stated that he was so busy helping Mr. Roosevelt prepare the defenses of this country that he could not spare the time necessary to come to Tennessee for the campaign.  I believed him.”  The writer then noted to his dismay the congressman had “done everything in his power to nullify that defense” since winning renomination.  The author concluded, “We voters owe it to ourselves, and to the nation, to defeat him for reelection in November.”

The Clarksville Leaf-Chronicle penned another anti-Byrns editorial wondering, “Was Barnum Right?”  “Since the death of the beloved Joseph W. Byrns, Sr., two Congressmen have been tried,” the editorial stated.  “’Little Joe’ was chosen because he was his father’s son and because he pledged support for the Democratic National Administration,” the Leaf-Chronicle said simply.  “His record has been disappointing.”

The Leaf-Chronicle recalled the ungracious quote attributed to Byrns about the King and Queen of Great Britain and said the young congressman had been “excused on the grounds of inexperience.”  The editorial revived a supposed interview with a New York newspaper where Byrns allegedly made fun of his state and the people he represented.  The Leaf-Chronicle reminded its readers showman P. T, Barnum had once gloated there was a sucker born every minute.  Referring to Joe Byrns, Jr., the Leaf-Chronicle thought voters “can outgrow their suckerhood.”

Immediately following his announcement he was running as an Independent for Congress, Percy Priest opened his campaign headquarters in rooms 501 and 502 in Nashville’s Andrew Jackson Hotel.  The Nashville Mailers’ Union instantly endorsed Priest’s candidacy.

Joe Byrns had yet to take Percy Priest’s candidacy seriously.  It was a serious miscalculation on the young congressman’s part.