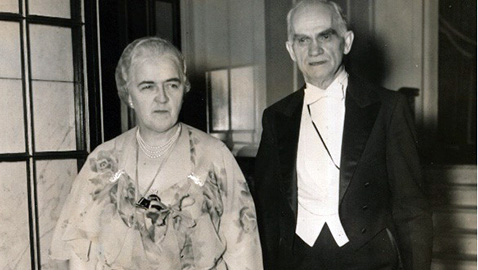 Joseph Wellington Byrns was almost surely the most popular political figure inside Tennessee’s “Hermitage District.”  That was the Congressional district in Tennessee which encompassed Nashville and the “Hermitage”, home of General Andrew Jackson.  For nearly twenty-eight years, that same district had been represented by Jo Byrns.  Tall and lean with white hair and alarmingly bushy coal-black eyebrows, Jo Byrns had lost only one political race in his entire career and had ousted a supposedly unbeatable incumbent to win election to Congress in 1908.   Byrns was regularly reelected and began rising in the Democratic ranks in the House of Representatives.  By 1931 when the Democrats narrowly controlled the House, Byrns became Chairman of the powerful Appropriations Committee.  When Speaker of the House John Nance Garner was elected Vice President with Franklin Roosevelt, Byrns was seriously considered as a replacement for the colorful Texan.  Byrns had seriously pondered leaving the House himself and had very much wanted to run for the United States Senate in 1930 following the death of Senator Lawrence D. Tyson.  Cordell Hull, the longtime congressman from Tennessee’s Fourth District, had quickly announced he would be a candidate in the Democratic primary, but support for Hull was hardly unanimous.  E. H. Crump, leader of the Shelby County political organization, did not especially like Hull and pledged Shelby County’s support to Congressman Byrns.  Eventually, Jo Byrns announced his candidacy for the U. S. Senate, but his campaign was over just as soon as it started.  Byrns, unbeknownst to most Tennesseans, suffered a heart attack while delivering his announcement speech.  Within days, Byrns had withdrawn as a candidate for the Senate and had declared he would again seek to represent the Hermitage District in Congress.  By 1933, Byrns was the Majority of the Leader of the House of Representatives.  When Henry T. Rainey of Illinois died in the summer of 1934, the lanky Tennessean was considered the favorite to be elected Speaker of the House.  Unfortunately, Jo Byrns did not spend long in the Speaker’s chair, serving from January 3, 1935 until June 4, 1936.

Naturally, Tennesseans and especially the residents of Tennessee’s Hermitage District were delighted to have the Speaker of the House as one of their own.  The sudden death of Jo Byrns shocked just about everyone in Washington, D. C. as well as Tennessee.  Byrns was only sixty-six years old.

The Hermitage District was one of the most solidly Democratic districts in Tennessee when the Volunteer State was as blue as indigo.  The heated primary to succeed Jo Byrns was won by Richard Merrill Atkinson, a former local attorney general.  For a district that had not been politically volatile for decades, Atkinson proved to be somewhat controversial rather quickly.  Much to the dismay of many of his constituents who strongly backed President Roosevelt, Atkinson was a bit independent-minded.  Speaking before a Rotary Club in Clarksville, Tennessee, the congressman said he conducted himself in Washington by doing his best to “vote, think and act” as he believed “the average Tennessean would do.”  Atkinson then announced he was against FDR’s plan to enlarge the U. S. Supreme Court.  Many Tennesseans backed Roosevelt’s bid to pack the Supreme Court and Senator Kenneth D. McKellar was one of the bitter-enders in the Senate to support FDR.  Were that not enough, Congressman Atkinson declared he was against the President’s wage and hours bill as well.  Atkinson said it was his opinion the wage and hours bill favored the northern and eastern regions of the country and was “dangerous” to the people of the Hermitage District.  Ironically, Congressman Atkinson had been in Clarksville to dedicate the Civilian Conservation Corp camp in the area to the late Jo Byrns.

As a freshman member of the House of Representatives, as well as one who succeeded a late Speaker, Richard M. Atkinson received more attention than many of his newly elected colleagues.  Atkinson and his wife seemingly enjoyed the social whirl of the Capitol even if it impaired their ability to spend time back home.  Most of Tennessee’s Congressional delegation did not make it back to the Volunteer State to celebrate the Thanksgiving holiday in the fall of 1937.  Neither Senator McKellar or his junior colleague, George L. Berry, who had been appointed in May following the sudden death of Nathan L. Bachman, were able to leave Washington.  That was especially unusual for Berry who routinely commuted between Pressman Home, Tennessee and Washington, D. C.  Sam D. McReynolds said he would spend time behind his desk and likely enjoy some Thanksgiving turkey later that evening.  J. Ridley Mitchell told a reporter it would be “work as usual” for the bachelor congressman from Tennessee’s Fourth Congressional district.  Atkinson, while not claiming he would be working in his office, acknowledged he and his wife would be dining in Washington rather than Tennessee.  Atkinson was back home briefly to attend a Vanderbilt football game before he and Mrs. Atkinson took a guest back to the Capitol for the special session of Congress.

The late Jo Bryns returned to the Capitol with the arrival of his official portrait, which was hung after the election of Speaker William B. Bankhead.  The Chief Clerk and Curator of Art for the Capitol, Charles E. Fairman, had cautiously refused to “accept responsibility for hanging” the portrait of Byrns until it was sanctioned by Bankhead.  Fairman admitted the Byrns portrait would likely take the place of a largely forgotten Democratic Speaker who would in turn be removed to a corner of the Capitol in relative obscurity.

In November of 1937, Senator K. D. McKellar announced he had recommended the appointment of Joseph W. Byrns, Jr., the only child of the late Jo Byrns, to serve as the Tennessee manager for the Home Owners’ Loan Corporation.  The younger Byrns was employed by the agency as an attorney.  Byrns had been qualified to run for Congress in 1936 after his father’s passing, but had refused to make the race.

Congressman Atkinson had already lit the admittedly short fuse of Senator Kenneth D. McKellar’s temper by proposing to dismiss William M. Gupton, Postmaster of Nashville.  The right to appoint a postmaster fell to a congressman in his home city, but McKellar was one of the senior Democrats in the United States Senate, but most importantly chaired the Senate Post Office & Post Roads Committee.  McKellar fired off a letter to Postmaster General (and Chairman of the Democratic National Committee) James A. Farley to protest any notion of firing Gupton.  Congressman Atkinson had submitted the name of S. N. Allen as Gupton’s successor.

“Such a plan would not meet with my approval in any sense,” McKellar wrote to Farley.  The senator said dismissing Gupton “would be an affront to him that cannot be justified, and I would regard it as an affront to me as well.”  There was virtually nobody in Washington, D. C. who did not realize what happened once Senator K. D. McKellar was personally affronted.  Apprised of McKellar’s fiery reaction to his plan, Congressman Atkinson claimed he was “surprised” and immediately claimed he wanted the postmaster of Nashville to be appointed through civil service rather than making a “political issue of it.”  Atkinson said he “intended to see” Senator McKellar “right away.”  “Civil service requirements suggest the appointment of the best fitted man for the office and I don’t think Mr. Gupton, as a professional politician, should be given an advantage politically over other deserving men who can qualify on merit,” Atkinson explained.  In McKellar’s letter to Postmaster General Farley, the senator noted a fact that was likely the reason Atkinson wished to replace William Gupton.  McKellar pointed out Gupton had been appointed upon the recommendation of Congressman Jo Byrns.  Gupton would be expected to support the congressional candidacy of Joseph W. Byrns, Jr. and Atkinson surely wished to replace him with someone more loyal.

Senator George L. Berry, with his eyes locked onto running to succeed himself in 1938, also endorsed Joe Byrns, Jr. for the appointment to head the Tennessee branch of the Home Owners’ Loan Corporation.  Yet the New Deal agency took no action and neither senator could publicly explain the cause for the delay in considering the Byrns nomination.  Byrns had other ideas, announcing on May 28, 1938 that he would be a candidate in the Democratic primary for his father’s old Congressional seat.  The younger Byrns declared there was but one issue between him and incumbent Richard M. Atkinson.  “The issue in this campaign is Roosevelt and anti-Roosevelt,” Byrns said.  “I stand where my father stood.  I am for Roosevelt.”

Young Byrns immediately set out to win his late father’s old seat in Congress, giving an impromptu speech at Yates Cave, near Cross Plains, Tennessee at a rally for farmers.  He was introduced to the audience by Lee T. Dowell, the former County Clerk for Robertson County.  Speaker Joseph W. Byrns had been a native of Robertson County and Dowell was a personal friend of the late congressman.  Byrns campaigned in Stewart County in the middle of June where he was critical of the incumbent for Atkinson’s “lack of a record” while in Congress.  That was a charge most any freshman member would be vulnerable to in a reelection campaign and would later come back to haunt Byrns.  Once again, Byrns was introduced to his listeners by an old friend of his father’s.

Two minor candidates dropped out of the race for the Fifth Congressional district when Earl J. Baker and Harry Nelson withdrew.  Baker, an attorney, said pressing legal matters made it impossible for him to run while Nelson, a coal dealer, said he was quitting the campaign and endorsing Joseph W. Byrns, Jr.  Nelson said he wished to see a clear-cut “conservative vs. liberalism – – – Atkinson vs. Roosevelt” race.  Nelson explained he had begun his campaign when it appeared two candidates who opposed the policies of President Roosevelt were running for the Democratic nomination.  Nelson praised Byrns for running on a “100 per cent New Deal platform” and urged his friends to back the young candidate “in order to solidify the opposition to Richard M. Atkinson.”  Only Monty S. Ross, a former assistant city attorney, remained on the ballot against Atkinson and Byrns.

Byrns spoke at Big Rock, Bumpus Mills and Big Meadows inside the Fifth Congressional district and was moving through Dover and Cumberland City by the middle of July.  Touring through the hamlets and hollows of the Fifth District, as well as the streets of Nashville largely informally, shaking hands and making extemporaneous remarks, Joseph W. Byrns, Jr. choose to formally open his drive for the Democratic nomination for Congress in Clarksville.  According to the Clarksville Leaf-Chronicle, somewhere between 1,500 – 2,000 people gathered to hear Joe Byrns, Jr. make his opening speech.  The candidate promised to support Franklin Roosevelt and the President’s policies “one hundred per cent” if he was elected to Congress.  Byrns said Congressman Atkinson had betrayed President Roosevelt by his failure to properly back FDR’s policies.  “I am for President Roosevelt because he is the greatest humanitarian we have ever had in the White House and because I know he is a friend of the people of this district,” Byrns said.  The candidate was introduced by prominent Montgomery County educator Dr. S. L. Smith, who said he had agreed to introduce Joe Byrns because of his “love and devotion for his late father.”  Not coincidentally, Dr. Smith was a member of the Southern Economic Conference, appointed by President Roosevelt.  Smith said he firmly believed FDR was trying his best to pull the country out of the depths of the Depression.

Byrns hammered Atkinson for voting against the wage and hours bill pushed by President Roosevelt.  Byrns charged Congressman Atkinson had “forgotten or willfully repudiated” the promises he had made when first elected to Congress in 1936.  Byrns believed Atkinson had betrayed not only the President, but the laboring people of the Fifth Congressional district.

The race for Congress in Tennessee’s Hermitage District would be hard fought in 1938.