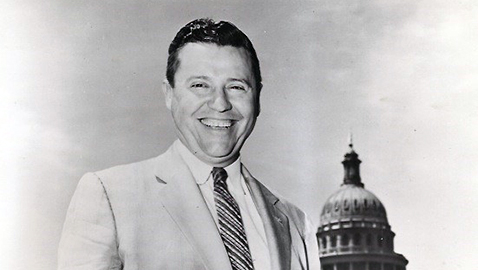 While now an apparently Republican “red” state, Texas was once solidly Democratic.  Like Tennessee, Texas has produced some interesting political personalities; Speaker of the House Sam Rayburn, Senator Tom Connally, Governor John Connally (no relation to Tom), Governor Ann Richards, George Bush and not least of all, Lyndon Baines Johnson.

Ralph Yarborough was a colorful and interesting figure, for many years the icon of liberal Democrats throughout Texas.  As with most one-party states, Texas Democrats were deeply divided into separate factions.  Lyndon Johnson had once been Franklin Roosevelt’s favorite Congressman from Texas and the brash Johnson had barely lost a Senate race in a 1941 special election to Governor W. Lee “Pappy” O’Daniel.  Johnson had been perceived as the “liberal” candidate, but within a few years LBJ would come to represent the establishment in Texas.

The best-known anti-establishment politician in Texas for decades was Ralph Yarborough.  Born in 1903 in Henderson County, Texas, Yarborough went on to become an attorney and was recognized as an expert in land use law.  As a young lawyer, Yarborough won acclaim for suing oil companies who were drilling for oil on public land to recover royalties owed the State of Texas.  Yarborough secured the second largest judgment against an oil company, winning one million dollars for Texas.

Governor James Allred rewarded Yarborough by appointing him to serve as a judge for Travis County.  Voters affirmed the governor’s appointment by electing Yarborough in his own right in 1936.  Not content with remaining on the bench, Yarborough ran for state Attorney General in 1938, but ran third in the Democratic primary.

Yarborough interrupted his legal and political career to serve in World War II, eventually rising to the rank of lieutenant colonel.  Following the war, Yarborough resumed his legal practice and contemplated another race for Attorney General in 1952 when he received a considerable shock from Governor Allan Shivers.  Yarborough was bluntly told not to bother running for Attorney General by Shivers, who was the most powerful Democrat in Texas, save for perhaps Senator Lyndon Johnson who was keeping a close eye on the governor as a rival.  Shivers was profoundly conservative and was seen as a possible candidate against Lyndon Johnson in 1954.  Neither LBJ nor Speaker of the House Sam Rayburn much liked Shivers and the feeling was mutual.

Yarborough, deeply insulted by Shivers’ attitude, changed his mind and ran against the governor in both the 1952 and 1954 primaries.  Yarborough gave Governor Shivers a run for his money, especially in 1954.  Shivers had refused to support Democratic presidential nominee Adlai Stevenson in 1952, preferring instead Republican Dwight D. Eisenhower.  Referring to the “Shivercrats” and their political apostasy, Yarborough received substantial backing from veterans, labor unions, and other progressive groups opposed to the conservative Shivers.

Governor Shivers defended himself by loudly denouncing Yarborough as a wild liberal who supported integration and had the backing of Communists.  Yarborough only barely lost.

Shivers decided not to run for reelection in 1956, but supported United States senator Price Daniel for governor.  Yarborough ran again and made it to the run-off election.  Yarborough received the endorsement of former governor and U. S. senator W. Lee O’Daniel, an ultra conservative himself in the run-off against Price Daniel.  Yarborough once again lost by a whisker and there were those who thought he had been counted out in East Texas due to voter fraud.

Price Daniel resigned his seat in the United States Senate and Governor Shivers, who had flirted with the idea of appointing a Republican, instead appointed William “Dollar Bill” Blakley.  Blakley, a hugely successful businessman and one of the founders of Braniff Airlines, was, like Shivers, a supporter of Dwight Eisenhower and a conservative.  Blakley has the distinction of having been twice appointed to the United States Senate; his penchant for supporting Republicans would prove to be his political undoing a few years later when he lost to John Tower in the 1961 special election to succeed Lyndon B. Johnson, who had resigned having been elected vice president.

Senator Yarborough had to almost immediately seek election again for the full six-year term in 1958.  Former Senator William A. Blakley emerged as the candidate of the “Shivercrats” in Texas.  Blakley had the support of former Governor Shivers, as well as incumbent Governor Price Daniel, but Yarborough won the primary by almost 200,000 votes out of more than a million ballots cast.

Yarborough became the leading progressive voice in Texas and strongly supported the administration of President John F. Kennedy.  Tensions quickly arose between Vice President Lyndon Johnson and Senator Ralph Yarborough.  Johnson was intent upon preserving his place in Texas and Yarborough was insistent upon his prerogatives as a member of the United States Senate.  The feuding between the two was one of the prime reasons John F. Kennedy traveled to Dallas in November of 1963.  Governor John Connally, an ally of LBJ, disliked Yarborough intensely and Texas Democrats were engaging in open warfare and as the Catholic Kennedy had barely carried the Lone Star State in 1960, the president was desperate to heal the breach between Texas Democrats prior to his reelection campaign in 1964.

Ralph Yarborough, along with Lyndon Johnson and John Connally, was riding in the presidential motorcade the day JFK was assassinated on November 22, 1963.  Riding with his rival LBJ, Yarborough had caused a serious stink when he first refused to ride in the same car as Johnson.  President Kennedy had to candidly tell Senator Yarborough that if he wished to ride in the presidential motorcade, he would have to ride with Vice President Johnson.  Kennedy also had to intercede with Governor Connally to ensure that Yarborough was not ignored.

Following Kennedy’s murder, Senator Yarborough called President Lyndon Johnson to offer his support.  Yarborough had little choice, realizing LBJ now controlled the levers of power and had no rivals in understanding the uses of power.

Yarborough did strongly support LBJ’s “Great Society” and won reelection in 1964 while Lyndon Johnson swept aside Barry Goldwater in a landslide.  Yarborough’s Republican opponent in the 1964 election was a young George H. W. Bush.

Yet the rivalry of Texas Democrats did not end with John F. Kennedy’s death or the 1964 election.

Senator Yarborough supported much of LBJ’s domestic agenda, yet he was increasingly critical of Johnson’s foreign policy and was ever skeptical of the war in Vietnam.  Yarborough lent his support to New York Senator Robert F. Kennedy in his bid to win the Democratic presidential nomination in 1968; following Kennedy’s assassination after having won the California primary, Senator Yarborough supported Minnesota Senator Eugene McCarthy, who lost to Johnson’s vice president, Hubert Humphrey.  Yarborough campaigned for Humphrey, who only narrowly won Texas.

Yarborough got some unwanted publicity when he and South Carolina Senator Strom Thurmond engaged in some rough housing as they prepared to enter a committee meeting.  Philosophically polar opposites, Thurmond proposed that if he could keep Yarborough from entering the committee hearing room, the Texas senator would refrain from voting.  A fitness addict, the South Carolina senator pounced on the portly Yarborough and they were rolling around on the marble floor when committee chairman Warren Magnuson of Washington, appalled, came out and snapped that they were to stop the foolishness immediately and come to work.

Ralph Yarborough became Chairman of the Senate’s Labor and Public Works Committee in 1969, but he did not get to enjoy his new found influence for long.  Conservative Democrats in Texas were coming together to challenge Yarborough for reelection in 1970.  Former Governor John Connally, who loathed Yarborough, helped to recruit former Congressman Lloyd Bentsen to run against the senator.

Handsome, well spoken, wealthy and shrewd, Bentsen proved to be an ideal challenger for Senator Yarborough.  The senator seemed to underestimate Bentsen and spent much of his time anticipating the general election campaign against George H. W. Bush, who was seeking a rematch with Yarborough.

Bentsen charged Yarborough was voting against the beliefs of a majority of Texans and was a political relic out of step and out of touch with Texas.  Bentsen won the primary with 54% of the vote, stunning Senator Yarborough.

The feisty Yarborough did not go quietly into the night; he decided to run for the Senate again in 1972 against Republican Senator John Tower.  First, Yarborough had to win the Democratic primary and once again conservative Democrats had a favorite in the form of Harold “Barefoot” Sanders.  Yarborough campaigned hard despite being almost sixty-nine years old at the time.  Yarborough came tantalizingly close to winning the primary outright, falling just 526 votes short needed for a majority.  The run-off election ended Ralph W. Yarborough’s political career.  He lost to Sanders by a 52 – 48% margin.

Yarborough continued practicing law until the end of his long life and achieved a status as an elder statesman.  Time finally caught up to Ralph Yarborough and he died January 27, 1996 at age ninety-two.