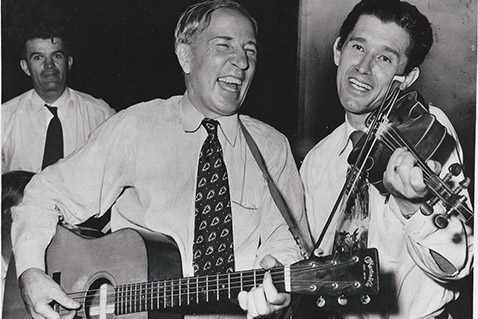 Democrats in Tennessee had routinely won elections with but few exceptions since 1900; only three times had Republicans managed to win the governorship. No Republican had ever been popularly elected to the United States Senate from Tennessee. Following an especially bloody and bitter primary fight by Democrats in the 1948 primary elections, Republicans thought they saw an opening through which they might squeeze out a rare statewide victory. The fact the national Democratic Party was also splintered and divided into three factions made it seem a certainty Thomas E. Dewey, governor of New York and once again the GOP presidential nominee, was a certain winner in the fall election. Lastly, the refusal of Edward Hull Crump, boss of the Shelby County political machine, to support President Harry Truman, gave many Tennessee Republicans additional hope for statewide victory. Crump’s candidates inside the Democratic primaries had lost; Governor Jim McCord had imposed a sales tax upon Tennesseans, albeit to better fund education. Still, McCord had been defeated in the primary by Gordon Browning, who had been the worst defeated governor when he lost in 1938.

Crump’s worst mistake had been dropping Senator Tom Stewart in the race for the United States Senate for an unknown Judge of the Circuit Court from Cookeville, John A. Mitchell. Stewart insisted upon running anyway, much to the dismay and astonishment of the Memphis Boss. The Democratic primary was won by neither Senator Stewart nor Judge Mitchell, but rather by Chattanooga Congressman Estes Kefauver, an opponent of the Crump machine. Crump had also declared his support for the presidential candidacy of State’s Rights presidential candidate Strom Thurmond. Crump’s political partner, Senator Kenneth D. McKellar, had been highly skeptical about the wisdom of dumping Tom Stewart for Judge Mitchell. The aging senator was a Democrat and loyally issued his own endorsement of President Truman.

With Crump bolting the Democratic Party in the general election, whispers immediately took hold in Tennessee that the Memphis Boss was profoundly opposed to both Gordon Browning and Estes Kefauver; everybody knew of the Memphis Boss’s antipathy toward Kefauver and Browning. Whispers filled ears all across the state that Crump might covertly support Carroll Reece and Roy Acuff over the regular Democratic ticket.

Democrats were exulting in the loss of control by the McKellar – Crump alliance or reeling from the defeat of Governor McCord. No newspaper in Tennessee had promoted the cause of Gordon Browning and Estes Kefauver more than the Nashville Tennessean. Silliman Evans, the publisher of the Tennessean, had supported both men from the beginning of the campaign. A sampling of opinion from newspapers of the time help readers to understand the time. Guy Smith, editor of the Knoxville Journal was as strong a Republican as Silliman Evans was a Democrat. Smith’s editorial following the loss of Tom Stewart and Jim McCord in the primaries was direct and to the point. Smith wrote Kefauver and Browning “represent the major miscalculation of Boss Ed Crump in 30 years of political activity. . .” Smith wrote, “Crump knows now, of course, that he could have won handily with Sen. Tom Stewart.” Guy Smith pointed out the combined vote of Senator Stewart and Judge John Mitchell was almost 60% of that cast by Tennessee Democrats. Smith’s editorial stated the Kefauver – Browning ticket was the “most fortunate” result of the election from “the standpoint of Republicans Carroll Reece and Roy Acuff.” Smith believed for “the first time in many years – – – since the election of Alf Taylor in 1920 in fact – – – there exists a first-class opportunity for a Republican state ticket to make a race with the expectation of winning.”

The Memphis Press-Scimitar published an editorial referring to the results of the Democratic primary as “a great victory” for the people of Tennessee. The Press-Scimitar proclaimed there was no doubt about the election of Estes Kefauver in the fall and flatly stated the Chattanooga congressman was “a worthy successor to Cordell Hull.” Referring to former governor Gordon Browning as “a great administrator,” the Press-Scimitar exclaimed that the people of Tennessee had “restored democracy to the state of Andrew Jackson.”

The Press-Scimitar’s rival daily newspaper in the Bluff City, the Memphis Commercial Appeal, more friendly to Crump, took a different tone, promoting harmony and urging unity amongst Tennessee Democrats. “Recriminations and bitterness ought to be forgotten and cast aside in the best tradition of a free people operating under a free government,” the Commercial Appeal urged.

The Chattanooga News-Free Press sounded a more belligerent tone in quoting John Paul Jones crying, “We have not yet begun to fight.” The News-Free Press stated its belief most of the 200,000 or so people who had not voted for Estes Kefauver in the primary election would not support the congressman in the fall. When that total was added to “Tennessee’s substantial normal Republican vote” the News-Free Press thought it represented “a very big hurdle” for Kefauver to jump over in the general election. Although a more conservative newspaper, the Chattanooga News-Free Press vented its fury at Ed Crump for the Memphis Boss’s “stupid effort to impose his will upon the state once again” and the end result had served him right. Nor was the News-Free Press any less forthright in its declaration where it would be found in the fall. “The News-Free Press, which will fight for American free enterprise and free government as long as they are here to fight for, proudly takes its stand with Carroll Reece.”

The News-Free Press lauded Governor Jim McCord’s service to the people of Tennessee but thought the burden of the sales tax, along with the “stigma” of having the support of Crump, had been too much for him to carry.

Even before the general election campaign began, there was already some discord between the national GOP campaign and its candidates in Tennessee. People who had traditionally been unfriendly to Carroll Reece were given the most prominent positions in the Dewey – Warren campaign in the Volunteer State. Reece was concerned enough at the time to make a quick trip to New York to sort it all out and the former congressman returned to Tennessee with at least some understanding. There was a divide between the two GOP congressmen from Tennessee – – – John Jennings, Jr. and Dayton Phillips – – – and the statewide ticket of Reece & Acuff. Herbert Brownell, the national campaign manager for the Dewey effort, met with Carroll Reece and Roy Acuff and following their meeting, gave out a statement to reporters saying he fully expected a Republican victory in Tennessee. “The campaign there is rapidly taking form and we have every reason to be optimistic in looking for the full success of the Dewey – Warren ticket and the election of a Republican senator.”

Gubernatorial nominee Roy Acuff was variously described by newspaper reporters as a “radio star,” “motion picture actor” and “hillbilly musician.” Even then a veteran star of Tennessee’s Grand Ole Opry, Acuff and Reece met to map out a plan to campaign the length of the Volunteer State. Democrats were vexed by the notion Roy Acuff might win the general election. Music was a tradition in Tennessee and Albert Gore, congressman from Tennessee’s Fourth District, had played his fiddle extensively during his first campaign for Congress in 1938. Gore said he didn’t believe the fiddle-playing Acuff could win in the fall, but he didn’t disparage the notion of a fiddle in the right hands.

The numbers were daunting on the face of it for Republican candidates. The total number of ballots cast in the 1948 Democratic primary was 431,596 as compared to a meager 100,977 votes in the GOP primary. Gordon Browning had tallied 240, 676 votes inside the Democratic primary while Roy Acuff won his own party’s nomination with 81,027 votes. Only fifty-eight of Tennessee’s counties even held a Republican primary election. What motivated Republicans was the knowledge Republican candidates had attracted as many as 10,000 votes in Shelby County when the Democratic Party was divided; yet the number of GOP ballots cast in the 1948 primary in Shelby was a paltry 899.

Carroll Reece clearly and simply outlined the major criticism of Democrats about his running mate. “His political opponents say that because of this beloved and successful son of Tennessee has the unusual gift of making his fellow men happy, he is not capable of being Governor. Their amazing contention is that it is the function of that high office to make people unhappy,” Reece said. The former congressman then gave a verbal and thorough thrashing of the New Deal and Harry Truman’s Fair Deal program. Carroll Reece was a conservative, a capitalist, and a patriot and made no pretense about it. Reece charged “alien-minded forces have seized control of the Democrat party.” The former congressman reiterated his support for the Tennessee Valley Authority and was critical of Estes Kefauver for his opposition to the Taft – Hartley Labor Law.

Nor did the Republican ticket seem short of cash. The Reece – Acuff campaign campaigned from stop to stop in a caravan of vehicles, all of which the Knoxville News-Sentinel reported were “new and painted in rich cream color.” The entourage toted a portable stage as well as “elaborate sound amplification equipment.”

Democrats naturally became agitated and downright alarmed at the crowds attracted to Republican rallies, which numbered well into the thousands, even in those areas where there were hardly a handful of GOP voters. Edward B. Smith, an assistant editor of the Knoxville News-Sentinel, even then a Democratic newspaper, wrote a weekly column. Smith castigated former congressman Carroll Reece as a poor representative of an officeholder attempting to uphold states’ rights. Smith pointed out Reece had voted no less than three times for a Federal anti-lynching law (1922, 1937 and 1940), as well as legislation that would have removed the poll tax in federal elections.

Things seemed promising for the GOP statewide ticket. Reece’s former colleague in Congress, John Jennings, Jr., who represented the Second Congressional District, announced his support for Reece and Acuff. Jennings had taken the place of J. Will Taylor in a 1939 special election. Carroll Reece had assumed Taylor’s position as Tennessee’s Republican National Committeeman. Jennings didn’t much like standing in Carroll Reece’s shadow and he was an independent thinker with a cantankerous streak. Nationally, the two congressmen had been on different sides. Reece had always gravitated toward the repeated presidential candidacies of Senator Robert A. Taft of Ohio, son of the late President William Howard Taft. John Jennings was the original Dewey man in Tennessee and an enthusiastic backer of the New Yorker who had sought the GOP presidential nomination three times himself. As it appeared Tom Dewey was certain to become president, Carroll Reece had to be somewhat uneasy about power shifting to Jennings in Tennessee. That was likely an additional reason Reece came home and opted to run for the United States Senate, aside from the fact it seemed to be a good political opportunity.

Reece’s political organization in the First District had tried to oust his successor in Congress, Dayton Philips, in the recent primary. Reece, knowing Tennessee Republicans were too scarce to enter the general election bickering, sought to smooth over past differences and heal old wounds.

Appearances can oftentimes be deceiving.