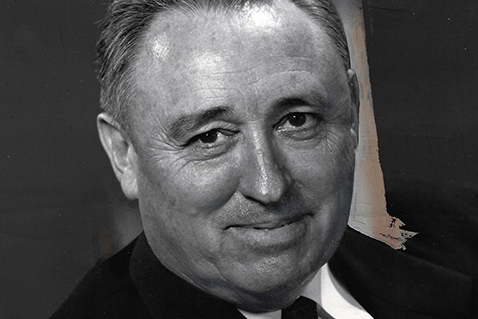 Only two weeks remained before Tennesseans trooped to the polls to cast their ballots in the 1948 election. Voters had an unusually large number of choices in the presidential race; Democrat Harry Truman, Republican Thomas E. Dewey, States’ Rights candidate Strom Thurmond of South Carolina, and Henry A. Wallace representing the Progressive Party. The plight of Truman seemed to virtually every political observer in the country nothing less than hopeless. The Democratic Party nationally had splintered with a revolt in the most Democratic area of the nation, the South, bolting to support Thurmond. Wallace, former vice president from 1941 – 45 under Franklin D. Roosevelt, had been Secretary of Commerce in the waning days of FDR’s administration and had been inherited by Truman. Wallace had extreme difficulty in staying inside his own lane and frequently commented upon foreign policy, riling Secretary of State James F. Byrnes, as Wallace’s comments were contrary to the policy of the Truman administration. Unlike Roosevelt, the peppery little man from Missouri had no difficulty firing anyone for any reason. Wallace ignored the repeated warnings not to make statements at odds with the stated foreign policy of the Truman administration and was fired by the president.

Seasoned election observers thought it impossible for Harry Truman to be elected to a term in his own right due to his fractured party. Moreover, New York Governor Thomas E. Dewey seemed as certain a winner as could be in the topsy-turvy world of electoral politics. Dewey was anything but incompetent and he was a veteran campaigner and felt some slippage as the race was coming to a close. Dewey had run his presidential campaign on a dignified plane, foregoing slashing attacks on Truman’s record. President Truman took his own case directly to the American people and did little but peck at the record compiled by the Republican majority Congress.

The Democratic Party in Tennessee was divided as well. Democrats had long dominated the Volunteer State and with a few notable exceptions, had come together after frequent knockdown – drag-out brawls inside their own primaries. Tennesseans had turned out two incumbents during the primary campaigns; U. S. Senator Tom Stewart had first been elected in a 1938 special election and had been reelected in 1942. Stewart would almost certainly have been reelected easily in 1948 had it not been for E. H. Crump, leader of the Shelby County political machine. Crump had backed Stewart in both 1938 and 1942, but for some reason, which largely remains murky to this day, opted to throw his support to an obscure judge of the Circuit Court from Cookeville, John A. Mitchell. That gave Chattanooga Congressman Estes Kefauver precisely the opening he needed to win the Democratic nomination, which he won with a plurality of the vote.

Crump had also backed Governor Jim Nance McCord for a third two-year term; McCord was challenged by a predecessor, Gordon Browning, who was a fierce foe of the Memphis Boss. Yet McCord had been ruined politically by his having advocated for and convincing the legislature to pass a statewide sales tax to fund education. It was Jim McCord’s sales tax that provided children in Tennessee with free textbooks for the first time. While folks may have liked the free textbooks, they hated the tax and Jim McCord lost to Gordon Browning in nine of ten of Tennessee’s congressional districts. Only in Crump’s domain did the governor receive a majority of the vote.

Crump had raised the hopes of Republicans in Tennessee, which had been rising steadily due to the infighting amongst Democrats across the state, by announcing he was bolting the Democratic Party and would not support Harry Truman. Crump declared his support for the States’ Rights candidate, Governor Strom Thurmond of South Carolina.

Republicans had never elected a U.S. senator in Tennessee since the advent of popular elections. The first person ever to be popularly elected to the United States Senate was Kenneth D. McKellar, who still sat in the Senate as Tennessee’s senior senator. It had been McKellar who had defeated the last truly serious GOP candidate for the United States Senate in 1916, when the GOP had nominated former governor Ben W. Hooper. With Republican hopes in Tennessee high, former congressman and Republican National Committeeman Carroll Reece had won the GOP nomination to run for the U. S. Senate. Republicans had also nominated legendary entertainer Roy Acuff to run as their candidate for governor. The GOP ticket was well-financed and, much to the alarm and consternation of Democrats, drew enormous crowds in every section of Tennessee.

With two weeks remaining before voters went to the polls, the various candidates made their final drive throughout every corner of the Volunteer State. There were still rumors circulating that Crump would support the Reece-Acuff ticket in the general despite the fact the Memphis Boss was himself utterly silent upon the topic. The regular Democratic organization in Tennessee which supported senatorial nominee Estes Kefauver and gubernatorial nominee Gordon Browning was careful to offer little or no support to the Truman-Barkley ticket in the general election. That was directly contrary to the activities of the Republicans who were more vocal than ever on behalf of their national ticket.

In Martin, Tennessee, former Congressman Carroll Reece continued to lambast the record of Estes Kefauver. Waving a copy of the New Republic magazine, Reece hollered it was a left-wing publication and soliciting contributions nationally for the Kefauver campaign. “This article tells what a far-seeing and up-and-coming liberal and progressive my opponent is,” Reece cried. “It relates how he ‘hit hard at the record of the Un-American Activities Committee.’”

“In short,” Reece explained, “it paints a picture of an ambitious young man who has been taken up to the mountain top by the eastern intellectual radicals. The money this eastern magazine is asking for will come from centers in New York where the English language is seldom used.”

Fred Travis, a legendary political reporter for the Chattanooga Daily Times throughout his long career, wrote, “The Republican political opera, aided by ideal autumn weather, continued drawing large crowds.” According to Travis, the Reece-Acuff road show drew 2,500 spectators on the lawn of the courthouse. Nearly 700 people gathered at the edge of Reelfoot Lake near Tiptonville to hear the GOP candidates. As Reece carried the brunt of the partisan drive to the general election for the statewide Republican candidates, gubernatorial candidate Roy Acuff had grinned and said he was keeping a “hands-off” attitude about candidates for the Tennessee General Assembly. Acuff readily acknowledged the majority in the legislature would be Democrats.

As Carroll Reece and Roy Acuff toured West Tennessee, Congressman Estes Kefauver was campaigning in the same end of the state. In Selmer, Tennessee, Kefauver “pointed out with telling effect that” his GOP opponent had opposed much of the farm legislation coming before Congress. What Kefauver neglected to mention was most Republicans had opposed much of the farm legislation proposed by the Roosevelt and Truman administrations. Gordon Browning campaigned alongside Kefauver in West Tennessee where the gubernatorial candidate chose Bolivar to address mental health issues. “Our mental patients deserve better treatment,” Browning said. “In some states as high as 30 per cent of the mental patients are restored to health and their place in society.”

“In our state the percentage is very much lower and this is because of inadequate care and treatment in our mental institutions,” Browning stated. “When I become governor this condition will be corrected. We will increase the funds for these institutions, increase and improve both the staffs and the facilities.”

Kefauver continued to charge Carroll Reece was “sailing under false pretenses” when the former congressman claimed to be supportive of the Tennessee Valley Authority. Former governor Gordon Browning also attacked Reese on the TVA issue. Browning also said he was largely for the five-point legislative package pushed by the Tennessee Education Association with one exception. The TEA had declared the new sales tax “sacred.” “To me, no tax is sacred,” Browning barked. “I know of only two kinds of taxes. One is bad, and the other is worse.” Yet Browning refused to pledge to repeal the sale tax, saying if he discovered “we need the money” in order “to maintain our standards of education, we shall use it.” The former governor did say he would immediately ask the legislature to change as far as the sales tax was concerned. “I don’t think we need a tax on prescription medicine for our sick or on coffins for the dead.”

Yet neither of the senatorial aspirants nor either of the gubernatorial nominees managed to employ the colorful language of Tom Taylor, who traveled with the Reece-Acuff caravan. A GOP lawyer from Athens who was also a candidate for Congress, Taylor denounced Estes Kefauver and Congressman Albert Gore as members of Washington’s “smart set” of the socially prominent who had interrupted campaigning in order “to have tea, play bridge and eat peacock tongues.”

As the election approached the Chattanooga Daily Times fretted editorially over the rumor E. H. Crump had quietly passed the word in his organization to back Carroll Reece. “If Mr. Ed Crump has indorsed Mr. Reece, that is more than Thomas E. Dewey has done,” the Daily Times huffed.

On November 2, 1948 voters went to the polls and dealt one of the greatest electoral upsets in our country’s history by electing Harry Truman president over Thomas E. Dewey. The Republican majorities in both houses of Congress were swept out by Democratic candidates. Republicans lost nine seats in the United States Senate and seventy-five in the House of Representatives. The gains so painstakingly won by the GOP and presided over by Carroll Reece while he was chairman of the Republican National Committee had evaporated.

Nor were there any upsets in the general election in Tennessee. Harry Truman carried the Volunteer State with just over 49% of the vote while Thomas E. Dewey won just under 37% of the ballots cast. The results in the race for the U. S. Senate seat in Tennessee were even more dismal. As many of Tennessee’s daily newspapers had speculated, the enormous crowds drawn to the Reece-Acuff rallies came to hear Roy Acuff’s country music and stayed at home and didn’t vote, or cast their ballots for the Democrats. Carroll Reece won just 33% while Estes Kefauver won 65% of the votes cast. There were a few signs of progress in the election returns with Reece and Roy Acuff carrying ordinarily Democratic Cumberland County. Yet Roy Acuff too won only 33% of the votes cast, although he won narrow victories in several counties inside Estes Kefauver’s own Third Congressional District which did not support Gordon Browning.

Although badly beaten, Carroll Reece was hardly finished in Tennessee politics. Guy Lincoln Smith, editor of the Knoxville Journal and chairman of the Tennessee Republican Party, read the returns from his own Second Congressional District and was livid. Knox County had voted for Kefauver and Browning over Reece and Acuff, while Tom Dewey carried it handily. Neither Carroll Reece nor Roy Acuff had drawn the regular GOP vote in the First or Second Districts, both of which were heavily Republican. Smith would lead the drive to replace both GOP congressmen in the First and Second Districts and was successful in his efforts. Howard Baker, the father of the future senator, beat John Jennings in the 1950 GOP primary while Carroll Reece ousted his successor in Congress, Dayton Phillips.

Both Estes Kefauver and Carroll Reece would remain in Congress for the remainder of their natural lives. Reece died in 1961 while Kefauver followed two years later. Both men were warmly remembered by their many friends and followers for decades after their own passing.